It’s Sunday morning and Penn State baseball plays the Bucknell Bison on Tuesday. Brian Tripp is on the call and has already started working hard memorizing names, back-stories and season statistics for every player on both teams.

He says he starts working days and weeks ahead of time so that everything he does on-air sounds crisp and organized.

Tripp is the voice of both the Penn State’s men’s hockey team and the baseball team on ESPN 1450. He also serves as a talk show host for the stations “Keystone Sports Beat.” He is a sideline reporter for The Big Ten Network and play-by-play voice on BTN.com, WHVL-TV and NFHS Network. 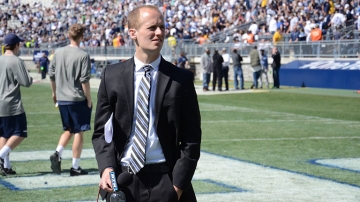 The people he works with say he stands out because of his work ethic.

“Every game he shows up to, he’s the most prepared I’ve ever seen anyone I’ve ever worked with,” said his color analyst Ryan Stevens.

“I prepare for every game like it’s the Super Bowl,” Tripp said.

Brian Tripp often does sideline reporting for Big Ten Network when they come to Penn State. Here he is covering football for BTN. Photo courtesy of Brian Tripp

Tripp began his career as a part of the student-run radio station at Penn State, ComRadio. According to Tripp, part of his decision major in broadcast journalism at Penn State came from the ability to get on air experience during his first year on campus.

By the time he was a senior, Tripp was working as a color analyst alongside the former Penn State baseball play-by-play broadcaster, Loren Crispell on ESPN 1450.

Working with Crispell, Tripp said he began to perfect his craft and eventually ended up in the play-by-play chair when Crispell was unable to cover games for the station.

Now that Tripp is the play-by-play man, he invites experienced seniors from ComRadio to join him in the booth and serve as his color analyst, just like Crispell did for him while he was a student.

Tripp said he isn’t getting complacent.

“A lot of people dream of announcing a Super Bowl on national TV or The Masters, the World Series, or the Stanley Cup Finals … that’s ultimately what I’m striving for,” Tripp said, “I want to one day be a TV broadcaster.”

For now, he is still young and has to stick to radio and Penn State sports.

According to the voice of Penn State football, Steve Jones, “I think he is one of the true up-and-coming broadcasters, not just here, but in the country. Everybody is about to find that out.”

Mark Fagnani is a senior majoring in broadcast journalism and minoring in human development and family studies. He is a member of ComRadio where he serves as a broadcast analyst, writer and producer for a variety of Penn State sports. He also is the host of a sports talk show, Taste of Philly.