While the sport may have been conjured in the mind of J.K. Rowling for her famous Harry Potter stories, quidditch has come to have a life all its own.

It started in 2005 at Middlebury College in Vermont, according to Penn State Club Quidditch President Elliot Bryson.

“They sort of just had an idea and ran with it,” Bryson said. “And it’s exploded on [college] campuses all over the world.” 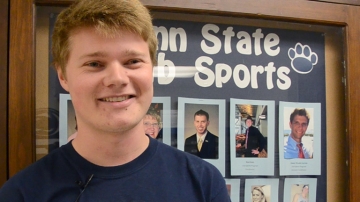 At that time, players wore capes and goggles as they ran around the quidditch pitch on brooms.

Penn State’s own quidditch history started five years after in 2010. A small group of students began playing the game, and the administration finally took notice as the players cleats began tearing up Old Main Lawn.

In 2011, quidditch became an official club sport at Penn State.

The biggest difference from the Harry Potter version of the game is, naturally, the lack of flying broomsticks that the “muggle” world has yet to invent. Bryson explained that in the books, the goal hoops are from 50 to 100 feet in the air, while in the “muggle” version the tallest hoop is about ten feet tall. 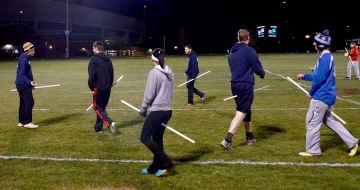 And although their brooms can’t fly, players must keep their “brooms,” really a yard-long PVC pipe, between their legs at all times.

“This creates for some interesting tackling situations,” Bryson said, adding that players only have one hand free at all times.

On the field there are seven players from each team: three chasers, two beaters, one keeper, and when the golden snitch comes on the field, one seeker.  Of these seven, two female players must be on the field at all times, according to International Quidditch Association rules. And there are four balls in play: one quaffle (a slightly deflated volleyball) and three bludgers (typical dodgeballs).

The chasers’ job is to score goals by getting the quaffle through one of the three hoops at the end of the field, each worth ten points. While the chasers may have a goal in reach, they could be hit with a bludger, thrown by one of the beaters, and be forced to head back to the opposite end of the pitch to start their play over again.

At the beginning of each game, the golden snitch, a player unaffiliated with each team, goes onto the field. Typically dressed in yellow, the snitch then runs off the pitch and hides within designated boundaries. The seekers are then allowed to pursue and find the snitch off the field, but typically remain close to the pitch in order to be ready for the attack. After about ten minutes, the snitch returns. In order for the game to end (and for an extra thirty points), a seeker must get a tennis ball incased in a tube sock that is attached to the snitch’s shorts.

At the involvement fair held at the beginning of each semester in the HUB-Robeson Center, quidditch club members run through the event with brooms between their legs, playing catch with a quaffle in order to grab the attention of potential future members.

After being a cross-country runner for most of his life, chaser Jason Rosenberg was looking for a more physical sport. He heard about quidditch from a friend who was playing on the team at the time. At first, Rosenburg was hesitant and thought the actualization of a sport from a fictional book was “weird,” but once he saw the competitiveness of the game, he was hooked.

“I just really grew to love the sport,” Rosenberg said. “I tell people my sport is quidditch. I [love] the physicality, and I love the people especially.” 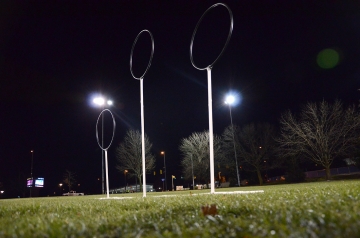 And on the quidditch pitch, there are plenty of characters.

As his drill line runs to the hoops to practice chasing, seeker Collin Leese-Thompson shouts “by Odin’s beard” and charges toward the defense. After a successful goal, he celebrates with his drill team as they all begin cheering, “Fourth line!”

Leese-Thompson is one of the three team captains.

“Quidditch has become my life,” he said.

His love for the magical world of Harry Potter began as a child when his mother read him the first three books. After that, he was able to read the series himself and said his love grew greater. He heard that he could play quidditch collegiately in high school when his love for the series had been diminishing. He thought maybe it was an option, but didn’t take it too seriously. Once he came to a practice and realized how friendly people were and what the sport was actually like was hooked, like Rosenburg. 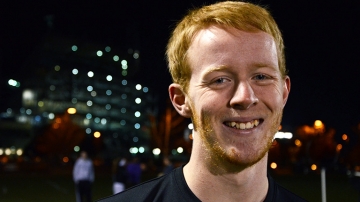 As a seeker, Leese-Thompson has to be fast with a broom since his job is to get the snitch—by any means necessary.

“I’ve gotten to the point where I can almost get to a full sprint completely with a broom,” he said.

The seeker position offers something he’s never seen in any other sport. He said the snitch is usually someone very strong, or very quick. Snitches often try to push and keep seekers away from the tennis ball attached to their shorts, or simply just sprint around the field.

“They also have a whole bunch of antics,” Leese-Thompson said. “I’ve gotten whipped cream pies to the face; I’ve seen snitches on unicycles.”

And with these antics it’s easy to have a good time.

“It’s very competitive,” he said. “But you can’t take it [too] seriously. That’s part of why it’s so much fun.”

But this sport is not just for those who grew up with dreams of going to Hogwarts.

“There are people on the quidditch team who haven’t read the books, haven’t watched the movies because, I mean, it is its own sport,” Leese-Thompson said.

Rosenberg said all are welcome to play, Harry Potter fans or not.

“When I tell people about the sport, I say it’s a full-contact, co-ed sport,” he said.

And even though the story of the Boy Who Lived came to an end in July 2007 and the final movie was released in July 2011, the sport of quidditch is growing. According to Bryson, it will continue to grow.

“It’s enough of a unique sport that it can…take on a life of its own,” he said.

The antics of the golden snitch

In the series, the snitch is a small, golden ball. But for the "muggles," the snitch is a person, unaffiliated with either team, and keeping the tradition, wears only yellow. Seekers must try to catch a tennis ball nestled inside of a tube sock that hangs from the snitch's shorts. And while in the books the snitch doesn't have much of a personality, Collin Leese-Thompson says these "muggle" snitches have minds all their own.