Ready, Aim, Fire at Your Dreams


Adam Gadd started hunting at a very young age with his father in Brownsville, Pennsylvania. He has hunted with everything from rifles, to shotguns, to what he eventually found to be his lifelong passion — shooting a bow and arrow.

“I first started archery while I was hunting. Archery taught me how to make more ethical shots on animals and become an overall better shooter because of it.”

Gadd picked up archery soon then after and later found his unique talent for the sport. However, talent was not enough for him as he wanted to be the best at this craft. This meant that he would have to practice every single day and develop consistency for years to come. 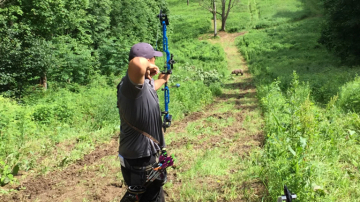 In an outdoor bowhunting competition, archers shoot at targets shaped like game animals, rather than traditional paper targets. Photo by Tyler Miller

Gadd soon transitioned from hunting with the bow and arrow to entering in multiple tournaments across the country both at the professional and collegiate level. His accomplishments now include a 2014 Outdoor International Bowhunting Organization (IBO) Championship, a 2014 Indoor IBO Championship, becoming one of the best archers on the Penn State Archery Club Team, and countless top-five finishes in multiple tournaments over the years.

“The best part about archery is the fact that it is a solo sport. Your accomplishments and failures are nobody’s responsibility except your own. Ninety-nine percent of the game is all mental, and that last one percent is just you versus the target.”

Gadd takes pride in his work as he is the only one grinding at the archery ranges day in and day out. It has taken years for Adam to get to the level where he is at, and that is strictly due to the biggest aspect of archery - consistency. In order to get better at the sport, one has to get his or her form down to perfection. This comes with constant practice, minor tweaks, and a strong-minded individual.

After winning multiple professional championships at age 15, Gadd said he wants to continue to pursue his dream of becoming a professional archer. Because of this, he became involved with Penn State’s Archery Club, an organization in which Gadd found much success in. Throughout his time in the club, Adam Gadd has consistently finished as one of the highest scorers among his teammates and even won several competitions along the way. He is a leader who is always ready for the moment, and this is shown through his decorated collegiate career.

After Gadd graduates, he plans to pursue his dream of becoming a full-time professional archer competing in competitions across the country and even overseas in European tournaments. Adam Gadd is a great story of finding your unique talent, turning it into your passion, and following that passion to live out your dreams.

All of the countless hours spent at the range adjusting the most minor aspects to his form, learning new techniques, and constantly putting in the work has led Gadd up to this moment. After spending time with Gadd at the archery range, it is clear that Gadd takes this sport very seriously and wants to be one of the best archers in the world when his story is said and done. With his dream being so close in sight, there is no chance that Gadd is slowing down any time soon.

Over the course of my career, I want to create engaging and entertaining content and work where my creativity is valued. During my entire 4 years of college, I have been working freelance for Barstool Sports, start up companies based in Boston, and even started my own business on my 22nd birthday. Throughout that time, I silently stacked my accomplishments, strengthened my skills, and ultimately made myself an asset for any company hiring. My favorite experiences in my field so far include hosting a surprise Jonas Brother concert, making global news reporting on the closing of Taco Bell at Penn State, directing the events coordination being the Barstool Sports College Football Show, and forming connections with some of the most talented and interesting people in the industry.