Saturdays are for skateboarding


Penn State seniors Mike Warren and Paul Klinges picked up skateboarding separately, but since becoming friends in middle school, they often cruise down the streets together. Biking, riding scooters and other similar sports also made Warren’s list of childhood hobbies, but skateboarding and longboarding are the pastimes he brought with him to State College.

Back home in Valley Forge, Pa., where Warren and Klinges first fell in love with the sport, some did not share their admiration for skateboarding and longboarding. Valley Forge National Historical Park, one of the state’s hallowed historical grounds, served as the perfect spot to board—when park rangers weren’t asking them to leave, Warren and Klinges said.

Run-ins with national park security, high school rent-a-cops and fast moving cars come with the street curb and asphalt territory of skateboarding and longboarding. There are also other obstacles to consider. For instance, one of Warren and Klinges’s friends fell off his board and had such a serious concussion that he had to be hauled away by an ambulance.

“He didn’t remember what college he was currently attending,” Warren said. His friend made a full recovery, Warren said.

While witnessing friends’ injuries and enduring a series of broken bones would likely be enough to deter most from the sport, Warren said that, for him, it’s all part of the appeal. “You’re going to fall. And then, if you like it enough, you’ll get back up…I guess I like it enough,” Warren said, causing Klinges to burst into laughter beside him.

Love of the Sport

Skateboarding is fun—“exhilarating”, even—said both Warren and Klinges. But perhaps the principal reason they love it so much is that it demands their total attention. 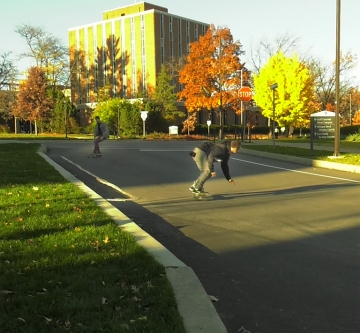 “When you’re going down [a hill] you have to put all of your focus into it,” said Klinges. “It’s an escape,” Warren said.

Getting distracted while skating or longboarding poses hazards.

“You’re not really focused on too much other than dodging cars when you’re dodging cars,” Warren said, half-joking.

For quick turns, halfpipes and other tricks, skateboards are the board of choice, Warren said.

“Longboards are more for cruising. A longboard is for when you just want to ride. It’s good for long distances,” Klinges said. In order to make his board better suited to cruising in addition to tricks, Warren replaced his typical skateboard wheels with bigger, more rubbery wheels for more stability and a better feel.

Although one style of board may be better for distance riding, both can withstand heavy use. Longboards and skateboards can be inherited or bought off of friends—Warren salvaged his current skateboard from a friend’s house; Klinges’s longboard once belonged to Warren.

Used boards can be traded, wheels can be swapped for a better fit, and bodily injuries are the norm. But after every bone broken and stitch needed, a new hill beckons and Warren and Klinges are back on the road.

Klinges played football just long enough to get a cellphone from his parents out of it, then quit, he said. Part of the reason team sports never stuck was Klinges's distaste for people telling him what to do, he said. It makes sense, then, that the instances like this one of scrutiny from the police were unable to diminish his passion for skateboarding and longboarding. This was a close call with the police, and Klinges said he was not charged.

Sara interned in development and communications at nonprofit organization Philadelphia FIGHT this summer. After graduation, she hopes to work for another nonprofit, or continue on to law school.