Simply Untouchable: The King of the Wrestling Ring

Kevin Murphy fell in love with the wrestling industry the minute he first laid eyes on it.

“I was watching the Macho Man Randy Savage fight Jake “The Snake” Roberts and Jake pulled out this huge green python and that thing latched his jaw around Savage’s arm,” said Murphy with a child-like exuberance. “Ever since then wrestling has been my life.”

Murphy first started brawling around in the backyard with neighborhood friends. They built a make-shift tomato stake ring in his backyard, each kid made their own gimmicks, and they would put on shows that at times drew an audience.

“Honestly it was like 15 people,” joked Murphy. “But when youre twelve and you capture the attention of someone and feel their energy, it makes it feel like a spotlight is on you; it’s something that I fed on.”

Murphy began to watch all the wrestling he could get his hands on. WWE, WCW, ECW, promotions from overseas — it made no matter. Murphy says he was obsessed with it all. Over time, he became aware that the business is actually a worked shoot. But it only made him fall in love with it more.

“Some people want to degrade wrestling. Call it fake,” Murphy said. “It’s as real as the Bachelor. It’s a soap opera, infused with athleticism, physicality and intricate stories. I guarantee you that if you watch it for entertainment value instead of how you would watch boxing or football you’d be hooked.

Although Murphy says he knew in his heart of hearts that wrestling was his champion, they were a number of roadblocks that impeded chasing his dream. Both of Murphy’s parents were stone-cold against Murphy wrestling. They worried about him potentially injuring himself and he said they didn’t want their son to wrestle in tights for a living.

“After my first match, I had a rash all over my back from hitting the ropes and a concussion. It was a great start” -- Kevin Murphy

They forced him to attend college, but Murphy couldn’t find anything to overtake his passion for wrestling. After a huge argument, Murphy finally laid down the script to his parents. At the age of 24, Murphy finally began professionally pursuing a career in the wrestling industry. However, Murphy immediately found himself at a disadvantage, 24 was an older age to begin to climb into a ring.

“It worried me at first, especially after my first couple of matches,” Murphy said. There were younger kids who could run circles around me in the ring, my body got beat up pretty bad. After my first match, I had a rash all over my back from hitting the ropes and a concussion. It was a great start.”

For all the glamour and glitz that surrounds the wrestling business, it’s one of the hardest lives to live. There’s constant traveling, the wear and tear of slamming one’s body over and over. Some independent promotions only pay 50 dollars to a wrestler for a match, a price that may cover gas and a sub after the show. Some promotions promised to pay Murphy, he would wrestle, then learn that the promoter reneged on the agreement and pocketed the money instead. 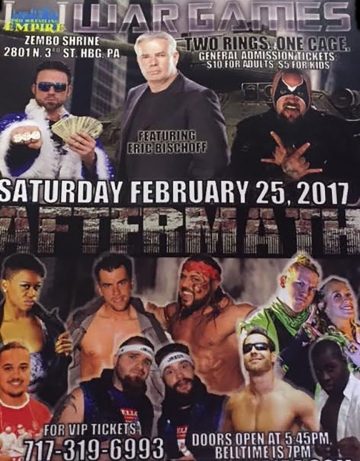 This is the promotional poster for the next wrestling event being held by the PWE, the company Kevin Murphy works for in the ring and behind the scenes.

To help make ends meet, Murphy began working full time at the Harrisburg Crackerbarrel, making his work schedule bend around his wrestling schedule. It was a life that led to long nights and early mornings, and the ends weren’t meeting. Murphy had to move into his parent’s basement because he couldn’t afford rent. There would be nights after a show he would have to sleep in his car or the gymnasium he just wrestled in because he couldn’t afford a motel.

“The first couple of years in the business really made me waver in whether or not I wanted to keep doing this. I wasn’t getting anywhere. I was learning — sure, but I began to question whether it was worth it. Luckily I stuck with it,” he said

Murphy said he embraced the fact that he was never going to be an artisan in chain wrestling, nor an individual who could wrestle a mat-classic. However, Murphy was able to convince the people in charge to give him more time in front of the microphone, and things began to change.

“I was going nowhere as a good guy, but I always loved the heels growing up. Guys like Ric Flair, Roddy Piper and Jake Roberts were so fascinating to me. When they turned me, it just let me flip a switch and I felt so much more at home,” Murphy said.

The bookers made the right decision. Within the year, the “Untouchable” Kevin Murphy was born. It’s a character with overtones of the “Nature Boy” Ric Flair and the Million Dollar Man, Ted DiBiase. Hailing from Hollywood, California, the opulent playboy used his greed and wealth to buy advantages at every turn. He ran his obnoxious mouth on the microphone, making sure everyone knew that he was better than them.

“My character is so fun to play. In real life I’m a humble, respectful guy. But when I walk through the curtain, I’m everything I want to be and everything I shouldn’t be. I get paid to make people hate me, what could be better?” Murphy said.

Now at the age of 31, The “Untouchable” Kevin Murphy has become one the marquee villians of the Pro Wrestling Empire. It’s not the WWE, but Murphy says his goal was never the big league.

“I get paid to make people hate me” -- Kevin Murphy

Murphy has his money invested into the PWE, and hopes that a few years down the road, that he can focus full-time on the wrestling company and make enough profits to provide for himself, but he doesn’t know when he will step away from the ring.

“I love doing promotions, interviews, podcasts,” Murphy said. “But nothing can compare to the adrenaline rush of walking in front of 2,000 people who paid their hard-earned money to see you do your craft. The ring is like a stage. The great wrestlers make music in the ring, and the audience comes because they like the tunes you play, they appreciate the story. I’ll keep wrestling until people stop liking what I do or until I feel like my song is sung.”

Kevin Murphy has been an ardent fan of wrestling his entire life. Here he discusses what it was like meeting his favorite wrestler growing up, “The Bad Guy” Scott Hall who teamed up with Hulk Hogan and Kevin Nash to launch the New World Order, one of the most infamous stables in wrestling history.