The one man team


Patrick Woo knew his career as an athlete was over after graduating from high school in 2010. But he found another way to become a part of a Division I team. Woo is in his second full season as a student-manager for Penn State's women's lacrosse team.

The Penn State junior considers himself to be one of the most important members of the team's support staff. He travels with the team, attends all games and practices, and is fully invested in its success.

Woo does not get paid, nor does he receive scholarship aid for the hard work given to the team. But Woo said making an impact on the players and being part of a team is well-worth the long hours dedicated to the program. 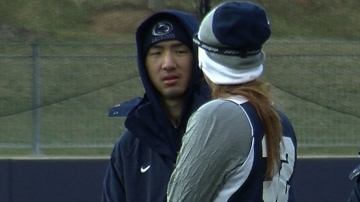 “I think it was the close interaction that you can have with a Division I sports team,” Woo said about his decision to join the team.  “Being able to be with the players and coaches every day and see what happens inside the program is very cool.”

Woo's duties include assisting the coaching staff at practice and in pregame by setting up drills and picking up balls. He also coordinates the video  of each game for the coaching staff to review. Whatever the players and coaches need, Woo is there willing to help get done.

"I appreciate it a lot when people approach me and ask me to do something for them," Woo said. "Support is one of the most important things you can give a person, and me being able to support the program in any way is the best part for me."

For his time and work given to the program, Woo receives team-issued clothes and travels to away games. Since he is the only male in the program, he is given his own hotel room and relies heavily on his iPod and iPad to try and cancel out the "girl talk and chick flicks" on the long bus rides

“There is nothing bad about this job,” Woo said. “Just  going to practice everyday and seeing the players and coaches, it allows me to put everything away and focus on sports and that is what makes sports so great.”

The junior could potentially graduate with a journalism degree a semester early next December, but Woo said he plans on pushing back graduation until Spring 2014 to allow himself to be with the team for one final season.

Woo's path to becoming a student-manager was a combination of his ambition and knowing a high school classmate, who played lacrosse for current Penn State head coach Missy Doherty while she was coaching at Towson.

Through my course work and professional opportunities, I believe I have the skills, talent and experience necessary to excel in the communications/media field.  While I have a great passion for sports reporting, pursing a full-time position in corporate communications and/or sports media and sports information are target opportunities for me.  My training as a writer and in broadcast media will allow me to effectively undertake these tasks.