Aaron is a senior majoring in broadcast journalism. He is a Massachusetts native with a passion for New England sports. While he majors in broadcasting, Aaron has been called "the best writer in ComRadio" by his peers, a distinction he greatly values. Because of his writing ability, Aaron was named the Sports Editor for ComRadio earlier this fall. Aaron contributes to various ComRadio productions such as coverage of the NFL Draft, Penn State football and men's basketball. He also does play by plays for professional, collegiate and high school sports including the State College Spikes and Penn State women's volleyball. Aside from his work with ComRadio, he is also an intern with ESPN Radio 1450 and a former sports staff writer for The Daily Collegian. 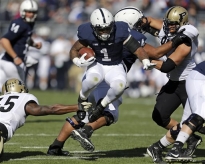 Game of the Week: Ball State vs. No. 15 Northern Illinois

Penn State Stumbles on the Road Again, Loses to Minnesota

Can the Raiders improve on their poor record of first round picks?