PHILADELPHIA, Pa — South Philadelphia’s very own Cacia’s Bakery first opened in 1953. Now it has expanded to six locations and employs the fifth generation of Cacia bakers.

Joseph Cacia II started working when he was 12, selling rolls out of a push cart with his father. 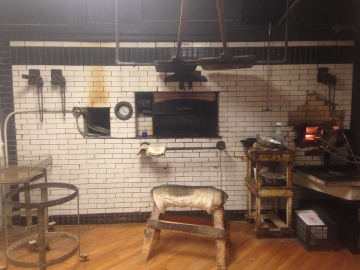 For 64 years this oven has been used for making bread at Cacia’s Bakery. Photo courtesy of Cacia's Bakery

Once they were able to, the Cacia family moved into an upstairs apartment that is located inside the bakery’s building.

Sam Cacia says how it was convenient for his grandfather because all he had to do to get to work was walk down the stairs.

“I remember running down Ritner Street putting on my school tie and late for school.” Joseph Cacia II says.

Rolls, pizza and roast pork sandwiches aren’t the only thing Cacia’s Bakery is known for. During the holidays the bakery offers seasonal treats, such as, Easter bread, Saint Joseph cakes and even baking turkeys for Thanksgiving.

Joseph Chiviaroli has been a Cacia’s customer for over ten years. Chiviaroli says that one of the reasons he goes to Cacia’s Bakery is because he once seen Joseph Cacia I handing out pizza to homeless people. He also, claims that Cacia’s has the best roast pork in the entire state.

Cacia’s Bakery is a family owned business that values the relationships between customers and workers.

Video: Working a little too hard

The workers at Cacia’s say they believe that the bakery has taught them to work hard for what they want and has shown them the true meaning of family. Joseph Cacia says he found himself discussing his work ethic at a tender age.

I would like to pursue a career in investigative journalism for a news channel. I am also interested in international reporting.