It’s a reality show indeed. Just think of it. “The Reality Above His Onions.” The name may not sound extremely appealing, but after watching a pilot episode about The Pawelski Onion Farm of Orange County, New York, it may just grab your interest.

No, the series isn’t real just yet, but for fourth generation farmer Christopher Pawleski a day in his fields is just as good as any reality show. He can often be spotted in his fields wearing a neon green farming suit.

Video: It's Not Fashion Week in the Fields

Even Onions Need a Rep

Pawelski can frequently be seen in front of a camera with the media advocating for his onions.

Numerous news organizations come knocking on his door throughout the years to get the low-down on a farm that provides the East Coast with plentiful onions. Pawelski says that in a good year his farm yields an average of “eight hundred to a thousand 50-pound bags of onions to the acre.” 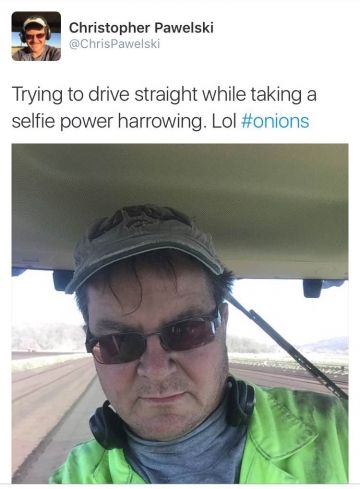 Power harrowing means using a tractor with bladed rotors to break up the soil’s surface and smooth it over before planting seeds.

CNN, CBS and BBC reporters are just a few who left footprints on his farm’s soil. Pawelski may have stories written and broadcasted about his well-appreciated onions, but little is uncovered about the real onion farmer and his connection to his crop.

Out of all the crops the Pawelski Farm could grow, why onions? When Pawelski's great grandparents, Frank and Julia Pawelski, came to the United States from Poland at the turn of the 20th century, they wanted to grow something they were familiar with. That something was onion. Muck soil, which is a fine dark soil, is only found in Orange County and a few other places in the United States. This type of soil is very similar to that of Poland.

Before Orange County was settled, glaciers from millions of years ago pushed this rich soil across the valley, which ultimately turned into cedar swampland. During the Revolutionary War period, settlers cleared the land and turned it into usable farming soil. Settlers during the early 1900’s, mainly Polish immigrants like Pawelski's great grandparents, cleared the land a second time. 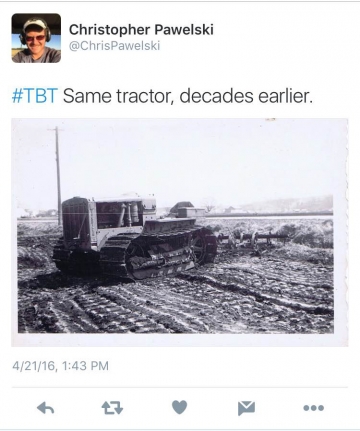 Pawelski says that the family tried to grow other various crops alongside their onions over the years, but the outlets for these secondary crops to succeed are limited in Orange County.

“Agriculture is very specialized,” Pawelski said. “That’s why it is very difficult to expand out. Labor is a huge concern … Onions, even if I have crummy onions, there are enough outlets here and there’s a supply chain that can always move onions.”

Although Pawelski received master’s degrees from the University of Iowa in both broadcasting and film, he discovered that office jobs weren’t for him. Working outdoors, tending to his fields, and driving trucks were much more up his alley. Those alternative passions led him back to his roots at his family farm.

Pawelski says that the operations of his farm are like a sitcom, or a soap opera. Just like a television show, his farm has a new season every year. Pawelski works alongside his father, Richard Pawelski, and brother, Brian Pawelski. He and his wife, Eve, are raising two sons on the farm, Caleb and Jonah. The drama of his working family doesn’t just entertain the Pawelskis.

“It’s funny. We have farm workers and usually they’re from Mexico. We never yell at our workers, but we yell at each other.” Pawelski said. “The Mexican farm workers just die laughing. They sit there as we start screaming at each other, my father, brother and I.”

The problems, dilemmas, and comical scenarios that always seem to blow by are straight out of the script of a real life sitcom.

Sometimes the drama of farm life takes a darker turn. Weather calamities, like Hurricane Irene in 2011, completely demolished the onions in its path and as of now, Pawelski has four farm workers currently facing jail time. An employee named Joey had a particularly rough experience as a farmworker.

On this Farm, it's Time for Meet the Press

Every year on this historic farm sprouts differently than the rest, but there are ways in which you can keep up with this farming reality show.

Pawelski’s presence on social media is vast. He is active on various platforms like Twitter, Facebook and YouTube. When “CBS Evening News” reporters appeared on his farm in 1996 after a destructive hailstorm, he was the only farmer in the area willing to talk about the devastation to his onions.

Pawelski even represents farmers in Congress. He works hard in achieving changes for farmers across the nation when it comes to crop insurance, labor and disaster aid. 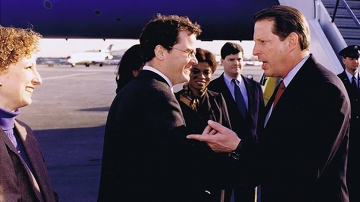 He and his wife attained such a presence on the federal level that they were chosen to serve on Hillary Clinton’s Agriculture Advisory Panel. Pawelski is constantly on the phone with representatives at Capitol Hill, even when he’s driving his 110 horsepower John Deere tractor.

Pawelski and his wife, Eve (left), are greeting Al Gore who was the 45th Vice President of the United States and served under President Bill Clinton at the time. Pawelski nd his wife have built up many relationships on the federal level in order to achieve changes for farmers.

You can follow his day-to-day tweets (@ChrisPawelski) and Facebook posts about the onion growing process, a disagreement he may have had with his father, or his political presence when standing up for farmers. Videos and news packages about the Pawelski family farm can be seen on Pawelski’s YouTube channel. He is currently working on his public policy organization called Farmroot, as well as his memoir.

Pawelski is currently dealing with ownership issues with a main drainage ditch on his farm. Neighbors are fighting his family over the rights and are building over the ditch. He set up a GoFundMe account in order to inform the public and get help with saving a drainage ditch that is so vital in farming and preventing his onions from devastation.

I am a storyteller. Since a young age, I have been telling stories through writing short plays, creative writing and performing in plays. Recently, my work includes writing feature television stories, radio stories, a screenplay, acting in various Penn State theatre productions and student films, and interning as an on-air personality, producer and writer for State College’s hit radio station, B94.5. I hope to tell many peoples’ stories one day through media and the arts.