Simmer Dougherty works at Bloomingdales selling designer clothes and accessories, but at home, she has the opposite life. Dougherty takes care of several different farm animals right in her backyard. 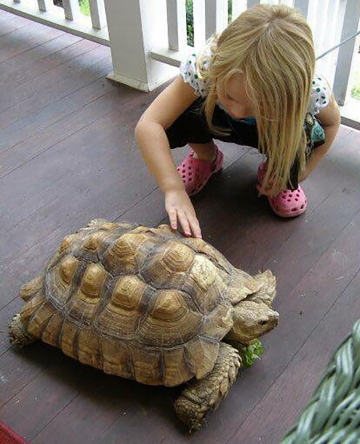 She was born in Utah, and then lived in California most of her life. What Dougherty missed most after moving to Pennsylvania twenty-one years ago was the beach. She says no one ever believes that she has a farm at her home due to her ‘not-so-stereotypical-farmer’ appearance.

It all started about ten years ago when Dougherty opened a preschool inside of her home. She wanted to have a couple of animals on-site in order to more effectively teach her students about them through a ‘hands-on’ approach.

The “backyard rescue” started with a lamb that Dougherty and her son raised.

Once Dougherty spread her contact information and her mission out to the public, more and more animals joined the rescue. A miniature horse, a peacock, pigs, rabbits, goats, chickens, ducks, and geese are some of the current animals living in Dougherty’s backyard. 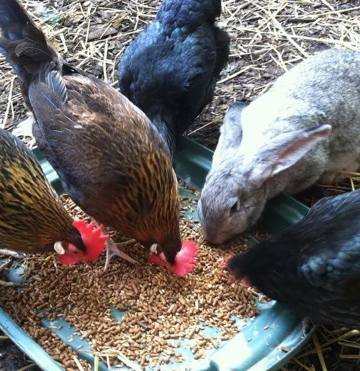 Dougherty's roosters and rabbits eating together. She says all of her animals get along, for the most part. Photo by Kelly Tornetta

Dougherty says her young students loved interacting with the animals, just like she and anyone who visits do.

Although she dislikes the tasks involved with maintaining the farm, Dougherty says she and the animals have a nice relationship. Even though the animals escape frequently and are always getting into some kind of trouble, at the end of the day, she says she looks at them as her “furry children.”

She says she plans to keep the farm, and let it continue to grow until she is physically incapable of maintaining it. At that point, Dougherty plans to do an extensive search for “wonderful” new homes for each animal.

Simmer Dougherty loves all of her animals, despite the trouble they're constantly causing. She says she has numerous funny (after the fact) stories about those instances. Here is one of them.

I plan to have a career in the Communications field, ideally a job specifically having to do with marketing or promotional work. I have interned at Seven Mountains Media, mostly with B94.5 radio station, where my responsibilities included on-air support, promotions, and marketing. I also had an internship with Paper Street Productions, where I was the Social Media and Marketing manager for the newly developed app, Tantastic, and I was a Brand Ambassador for Infield Promotional Staffing.