American Indians gathered at Mount Nittany Middle School In State College, for a traditional Powwow. This Powwow is an annual event put on by one of Penn State’s Communications professor and American Indian, John Sanchez.

Among these American Indians were; vendors, dancers, spectators and centuries of heritage and tradition. However, two different women perspectives about what the public can gain from a Powwow and all American Indians have to offer at the Powwow.

“I am just here enjoying myself and to us the Powwow is about having fun and sharing the tradition,” Charlene Teters said.

The tradition is the dancing, drumming and the regalia. Teters says she remembers making clothing with her family and how the regalia is passed on for generations. 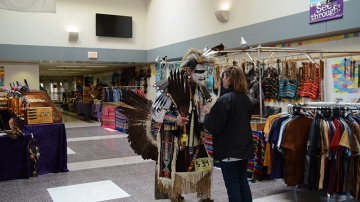 During dancing people are asked to complete this spiritual dance without dropping any regalia. An Eagle feather would be the most heartbreaking thing to drop, because it holds a lot of meaning.

Sunlight filled the hallway from the skylight of the middle school ceiling and bounced off of all the shiny regalia in attendance. These were elaborate outfits that varied from feathers, to buckskin, and some even having metal, coiled to make bells on some of the women's skirts. These bells made the women jingle and ring with every sway and step.

Teters is wearing a baby blue wool vest over her heather grey turtleneck shirt. On her vest were hand crafted doves and flowers that were so detailed, it’s like the birds jumped off of her. On the seams of her vest were detailed embroidered lining with shiny beads of white and gold.

“This is made by a Cherokee woman, named singer,” she said grasping the tail of her vest “I always try to support native artist, if I am not making it myself”
She responded, as we talked about the difference of buying a native inspired outfit from retailers and buying native clothes from native people.

Further down the sunlit hallways into the cafeteria, was a woman who could appreciate someone who supports native artists, Stacey Littledeer.  Littledeer is a watercolor/pastel-painting artist who’s most prized for her portrayals of American Indian culture through her artwork.

Littledeer is a Mattaponi Indian who traveled from Virginia to be apart of the Powwow. Her 10ft square exhibit was filled will all of her artwork. Most interesting about Litteledeer, is that she informs her customers that, every picture painted on display was also available in smaller frames,  on boxes and mugs. Whether you’re looking for new painting for the home or just an accent for the room, Littledeer has the perfect piece.

The piece hanging in her exhibit, front and center and is called, Native Blanket.
The painting is in a 1x2ft picture frame and has  all the colors as the rainbow dripped and blotted into a beautiful sunset over a grassy field, in this field is a long haired women with an American flag draped across her back.

"This painting was inspired by the removal period where American Indians were taken out of places they had known all their lives and moved far west. During this time we were placed in places that weren’t familiar to us and there might have been an American flag flying overhead, but to that old woman, that flag wasn’t a representation of a valid nation. It was a piece of material that could potentially keep her warm.” said Littledeer.

Littledeer was able to make this sad part of history into a beautiful painting with a heart-felt message. Yet, questions still surface; how do those who aren’t American Indian perceive this piece or other pieces and is Littledeer actually going to sell her prized piece?

“I enjoy selling my pieces it means someone has connected with my story. I premiered this piece on Randalls Island in New York. I was there at a Powwow and I was surprised to see how well received my artwork is, even from non-native people” she said.

For the woman who only supports the native artists, to the native artist herself, the necessity to keep in touch with one’s culture is the reoccurring theme at the Penn State Powwow and American Indian people.

"When we take these out, they’re not just meaningless things to us, they’re sacred, they’re our stories. They belonged to the people who made them before us and when we put them on those ancestors are with us,” Teters said.

James Gayles is a volunteer at the Penn State Powwow, who came just to help out his sister and fell in love! Gayles is on kitchen duty, by preparing and frying the star of the Powwow, the fry bread. Although this is Gayles' first time at the Powwow he already knows the fan favorites and the importance of the Powwow.

I want to pursue a career in entertainment news and use my information sciences and technology minor to find new ways to get news to my audience. I prefer to be behind the scenes rather than in front of the camera.

Stand Up For Sean McGowan