Kevin Gallagher graduated from Marple Newtown Senior High School in June 2009 before attending Penn State as a freshman that summer. Since his arrival on campus, Kevin has been a participant in the realm of broadcast journalism. His involvement started in Fall 2009 as a member of Penn State's student radio station ComRadio. Since that time, Kevin has become Production Director at the station, while maintaining Lab Attendant activities as a senior. He is in charge of any on-air content and making weekly promos for sporting events and talk shows on ComRadio. Kevin is also a producer for ComRadio's Penn State Football Pregame Show, which features guest interviews from professional sports personalities and writers, clips from weekly press conferences and live interviews with play-by-play announcers. Some guests over the past few years have included Eddie George, Brent Musburger and Penn State radio announcer Steve Jones. Kevin is also responsible for the creation and voice in the Pregame Show's intro for every football game. Aside from his behind-the-scenes work, Kevin contributes to ComRadio's website through feature articles and beat writes. He also does work through radio play-by-plays of Penn State sporting events such as football, men's and women's soccer, men's and women's basketball, women's volleyball and baseball. In the Fall of 2011, Kevin was given the opportunity to participate in Big Ten Network's Student U broadcast of Penn State women's soccer. He took the opportunity and provided play-by-play commentary for the majority of women's soccer games that season. Despite all of this work with radio communications, Kevin is currently participating in the Centre County Report television newscast at Penn State. The Centre County Report allows for students to create their own newscast out of stories and interviews they conduct in surrounding towns and counties. Thus far, Kevin has reported on stories ranging from devastating fires to Penn State's Blueout football game earlier this season. Not only is Kevin a field reporter for the newscast, but he also provides behind-the-scenes work as producer for both the Centre County Report's newscast and coverage of the 2012 Presidential Election. Through his experience in television, he has learned how to track newscast audio, use Final Cut Pro and post individual stories to the Centre County Report website. In the Spring, Kevin hopes to use these skills in Penn State's In The Game, which is a sports-focused newscast. Outside of the classroom, Kevin has also worked as an intern for 97.5 The Fanatic in Philadelphia. During his time at the station in Summer 2011, he was responsible for creating promos, podcasting sound to the 97.5 website and cutting sound clips for producers of talk shows such as The Mike Missanelli Show. Kevin considers his time at 97.5 one of the reasons he wants to be in broadcast journalism. In addition to this internship, he has also had other accomplishments during his time in college. In his freshman year, Kevin was accepted into the John Curley Center for Sports Journalism at Penn State. In his junior year, he was inducted into the Kappa Tau Alpha National Honor Society after obtaining a high GPA in his major. However, his talents are not limited to just journalism. In Summer 2011, Kevin was one of four members to compete for Penn State's Stand-Up Comedy team in the TBS/Rooftop Comedy National College Comedy Competition. Penn State proved victorious in the competition, which sent Kevin and the other members to Los Angeles as part of the prize for first place. He hopes one day to be an entertainer, whether it be in news, sports or comedy. After graduation, Kevin hopes to either continue his education or find a full-time position in journalism. He can be found on Twitter: @kevgalla24 or at his email kmg5238@gmail.com. 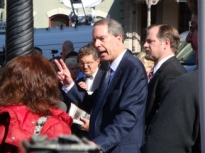