Ross is a senior from Pittsburgh, Pennsylvania majoring in Broadcast Journalism, minoring in business and a member of Penn State's John Curley Center for Sports Journalism. He anchors and reports both sports and news for the Centre County Report. He's also a sports talk show host of "The Ross Insana Show" every Sunday from 5-6 PM on ComRadio in addition to headlining ComRadio's Penn State Hockey coverage as the Men's Hockey columnist and host of the ComRadio Men's Hockey Pregame Show for the 2013-2014 season. His internship experiences recently include being a Production Assistant Intern for ESPN Radio 1450 in State College for "Sports Talk" with the voice of Penn State Football Steve Jones. Ross was formerly the Pittsburgh Pirates Pregame and Postgame Show intern for Sports Radio 93.7 The Fan in Pittsburgh for hosts Dan Zangrilli and former Major Leaguer Kevin Orie during the 2013 Pittsburgh Pirates season. His future aspirations are to cover baseball in any facet at any level whether it's play-by play, color commentary, writing, media relations or sideline reporting. With a background in baseball coaching and instruction, he'd like to become a head coach for a High School baseball team in the future.

And Then There Were Two

“He turned me into a new baseball player”

Guy Gadowsky One on One

Column: Power Play Improving, But Not There Yet 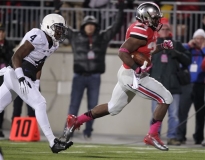 Column: Nittany Lions Have Not “Scheid” Away

Season Opener to be Played as Scheduled

Zwinak Comes to Play in Loss to UCF

All in the Family: The Olczyk’s