Jason is a junior from Lansdale Pennsylvania majoring in Sports Broadcast Journalism with a minor in Spanish. Jason is a member of the Penn State’s John Curley Center for Sports Journalism program. He is also a member of Com-Radio, where he co-hosts the show “Real Talk Basketball,” and a member of the Multicultural Affairs for Communications. His ambition is to become a sports broadcaster for one of the major networks such as ESPN, Fox, or Comcast Sports. As a life-long Phillies fan, Jason wouldn’t mind filling the shoes of legendary announcer “Harry Kalas”. He plans to further his studies acquiring a Master’s degree in Broadcast Journalism or Spanish. 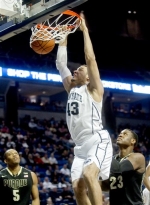 Lady Lions fall on the road to Miami