Seth Goldsmith is a 22 year old Pittsburgh native. He is in his last semester at Penn State majoring in Telecommunications. But Seth doesn't live your average college student life. While most students spend their weekends partying or studying, Seth finds himself in a whirlwind of travel, shows and late night studio sessions. 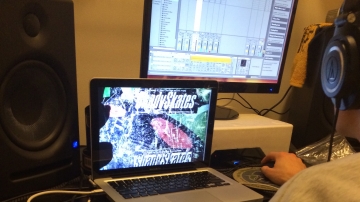 Better known as "Crystal Seth", Goldsmith is an ambitious rapper who often puts being a student on the back-burner to live out his dream.

Goldsmith started writing songs at the age of 16. Now 22, he feels that he has made a great deal of progress being able to pursuer his rap career and Bachelor's degree simultaneously.

Throughout his time as a student, Seth gained popularity in the Penn State community through his multiple performances from frat houses to a Student Programming Association late night performance in the HUB.

"I really enjoyed working with Bubba. He's a really cool dude and talented. We definitely had fun on the set of our video just goofin' around but the finished product was dope." (See video below)


But life as a rapper isn't always as glamorous as it may seem.

Seth often struggles with what he considers "everyday normal human things" such as staying in touch with his family or spending time with his girlfriend Brittany who also lives a busy life as a dancer.

Goldsmith says he is emotionally driven to pursue his dream and reach fame. "My brother lives out in California so my mom doesn't get to see him more than once or twice a year. I would like to be able to call her up and say "you wanna go to Cali for the weekend? Go ahead. And rent yourself a Mustang while you're there".

While Seth has never failed a class during his time as a student, he has felt the pressur that comes from setting school aside in times of major music developments. A week before his last finals week, Seth was on the road doing shows as well as performing in a Penn State frat house with Taylor Gang's Chevy Woods.

"I'll put it to you this way. At the end of the day, I'm going to graduate. Yes, I fall behind sometimes. But when you're chasing your dream, you gotta just go with it. Whatever happens happens. I just want to be successful and provide things for everyone that I love."

Goldsmith is on track to graduate in just a few short weeks and says he is looking forward to everything that his future has in store for him.

Gillian Malone is in her senior year at The Pennsylvania State University. She is studying Broadcast Journalism with a minor in business. Gillian is currently interning for the Penn State Football program in recruiting. This is her second year with the organization. Aside from school, Gillian enjoys reading, traveling and anything sports.