A year in photos by Chloe Elmer

Penn State senior Chloe Elmer's images from the 2011-2012 document some of the highs and lows of a tumultous year. From victories on the court, to the scandal that rocked the campus, as well as quiet moments as far away as Brazil. 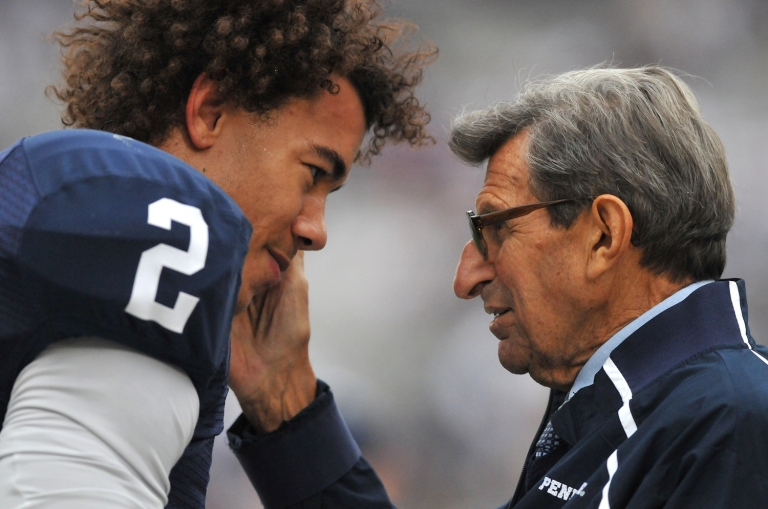 At what would become one of Joe Paterno's final games at Beaver Stadium, Chaz Powell is greeted by the legendary head coach before the game against Eastern Michigan. / Photo by Chloe Elmer 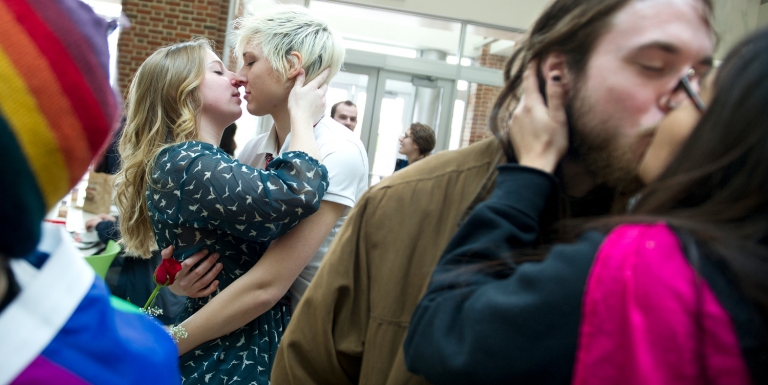 Ashley Matz, left, kisses her girlfriend Erica Pilgram in the HUB during the LGBTA annual Valentine's Day KissOut on February 14, 2012. The couple, who said they have been together for about a month, are actively involved in the LGBTA center on campus. / Photo by Chloe Elmer 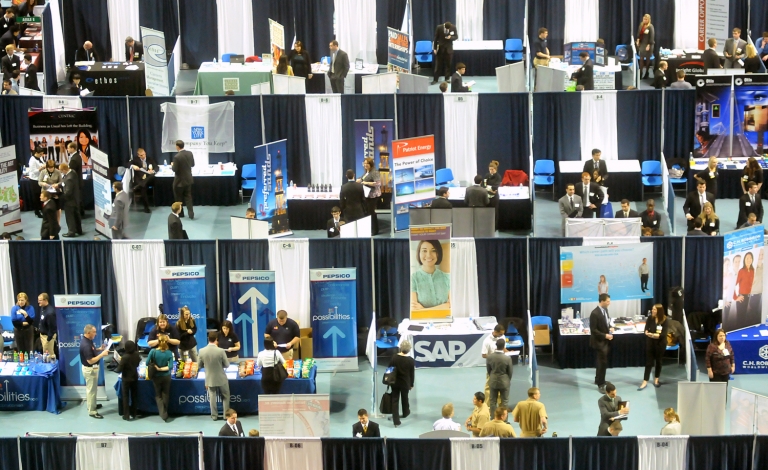 Students meet with potential employers during a career fair in the Bryce Jordan Center at Penn State on Feb. 6, 2012. / Photo by Chloe Elmer 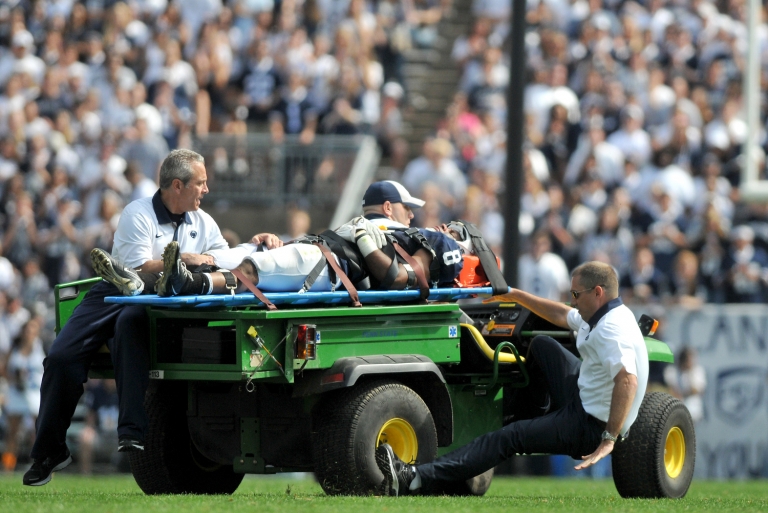 A Penn State physician falls off the cart while taking an injured D'Anton Lynn off the field during the Sept. 24, 2012 game against Eastern Michigan at Beaver Stadium. / Photo by Chloe Elmer 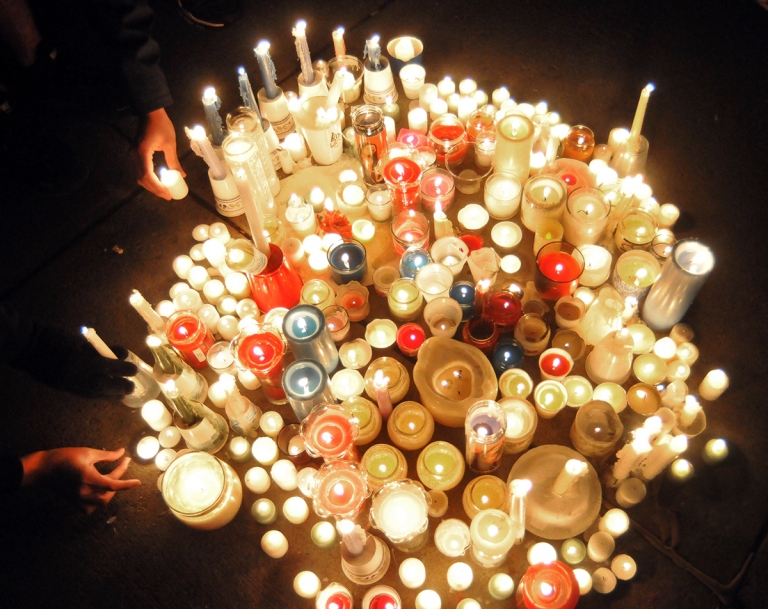 Participants place candles on the Old Main patio at Penn State during a vigil for victims of sexual assault November 11, 2011. The vigil was held after the news of the Jerry Sandusky child sex abuse scandal surfaced. / Photo by Chloe Elmer 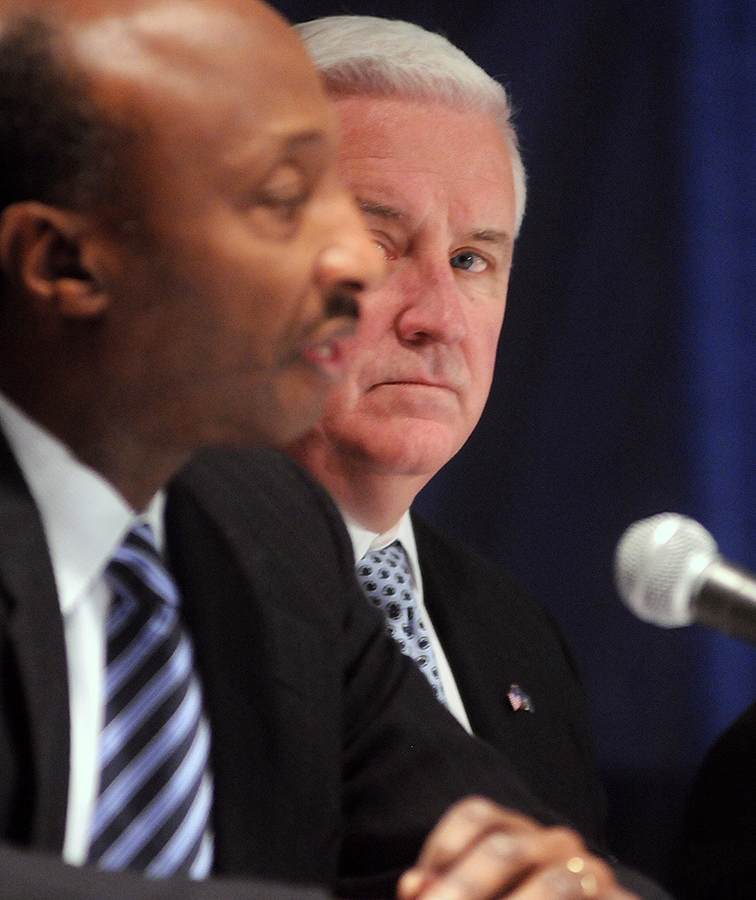 Pennsylvania Governor Tom Corbett, right, watches as Kenneth Frazier, chairman of the investigative committee of the Jerry Sandusky child sex abuse scandal, speaks to the media following a Board of Trustees meeting on Jan. 20, 2012 at the Nittany Lion Inn on Penn State's University Park campus. / Photo by Chloe Elmer 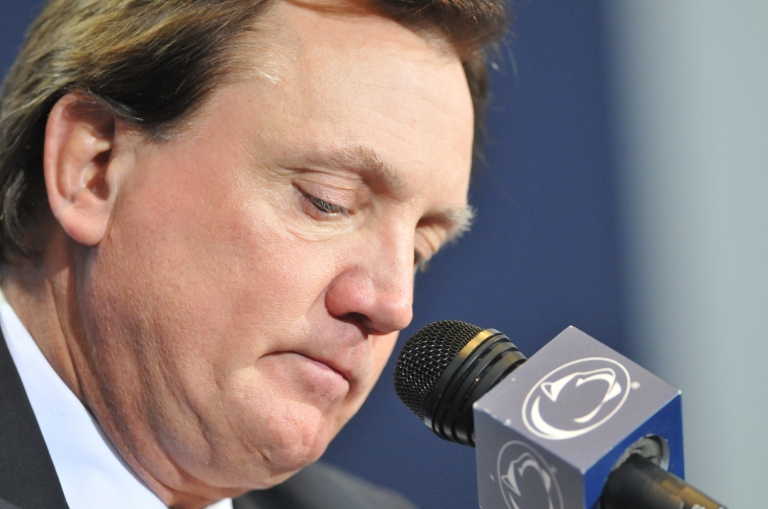 Tom Bradley, speaking to the media during his first press conference as interim head coach, pauses after being asked a question about former head coach Joe Paterno. Bradley was an assistant to Joe Paterno before Paterno was fired in the aftermath of a child sex scandal involving retired defensive coordinator Jerry Sandusky. / Photo by Chloe Elmer

Former Penn State head coach Joe Paterno meets fans and the media outside of his home in State College on Nov. 8, 2011. About 300 students gathered in support of Paterno, before his firing by the Penn State Board of Trustees. / Photo by Chloe Elmer 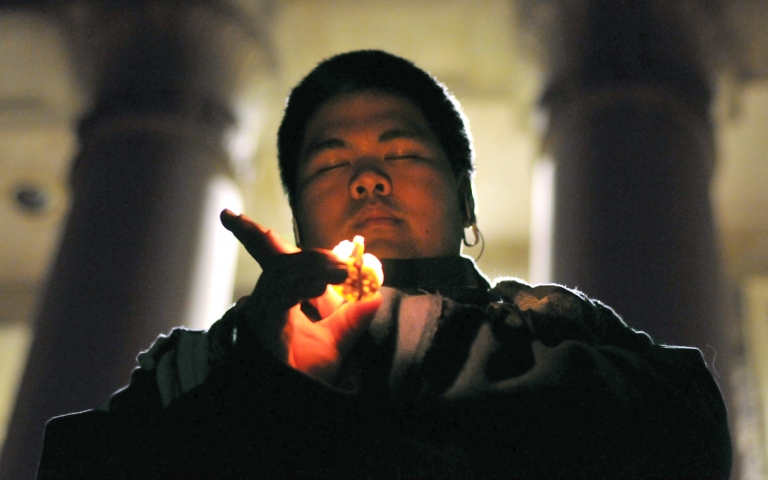 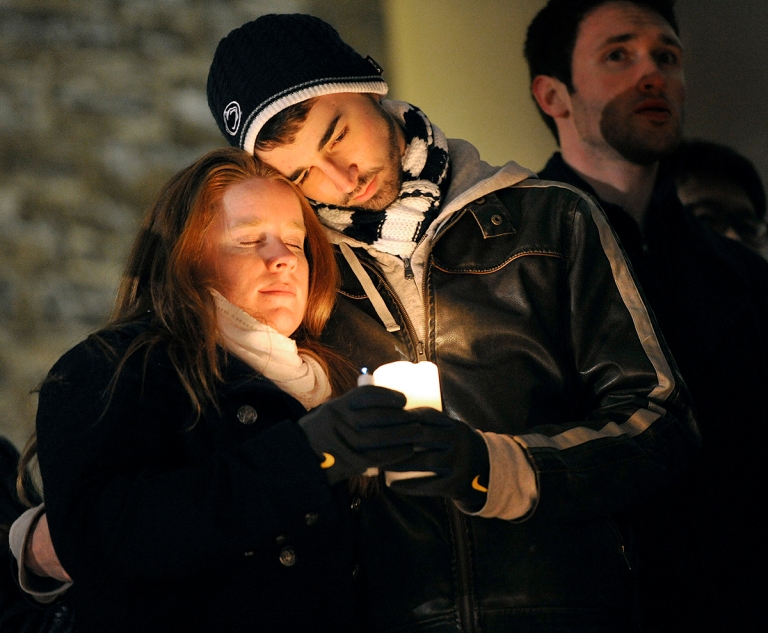 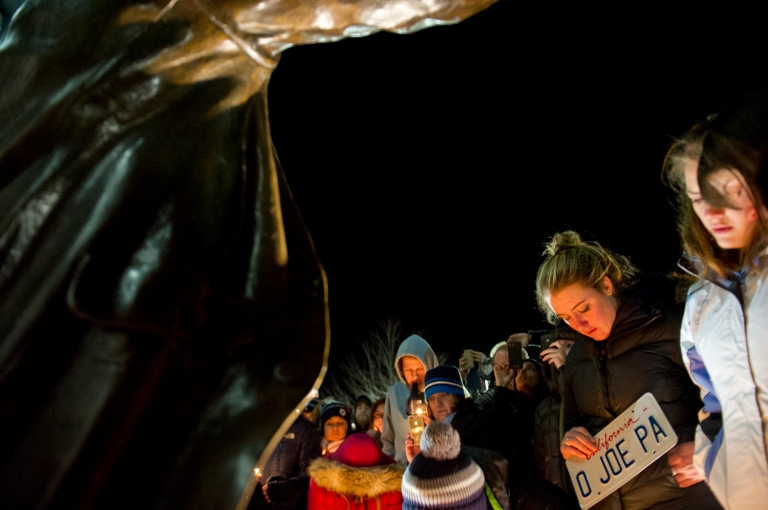 Mary Quayle, a senior at Penn State, clings to her California license plate that reads "O JOE PA" at the statue of the former Penn State head football coach with other students and community members on January 21 amidst false reports that Paterno had passed away due to complications with his lung cancer. The next day, the Paterno family released a statement that Paterno had indeed passed away. / Photo by Chloe Elmer 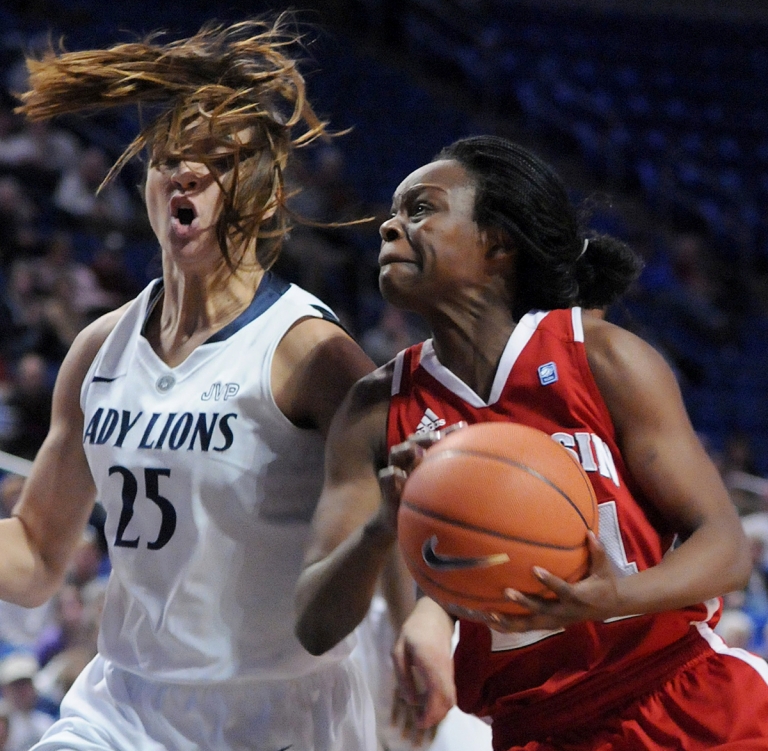 Penn State's Gizelle Studevent (25) tries to block a shot by Wisconsin's Tiera Stephen during their game in the Bryce Jordan Center. / Photo by Chloe Elmer 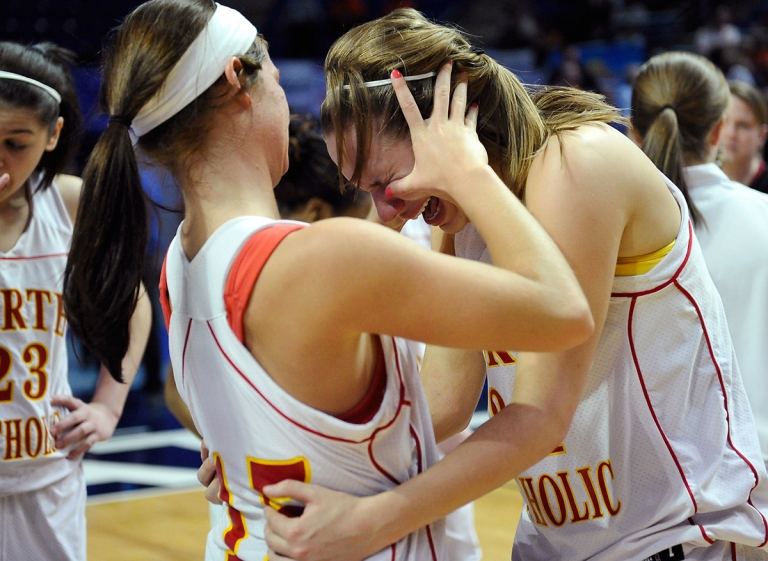 North Catholic High School's Lynzi Mueller (15) , left, tries to comfort teammate Angela Nowacki (21) after their 66-59 loss to Steelton-Highspire in the A division of the PIAA Championships in the Bryce Jordan Center on March 24, 2012. / Photo by Chloe Elmer 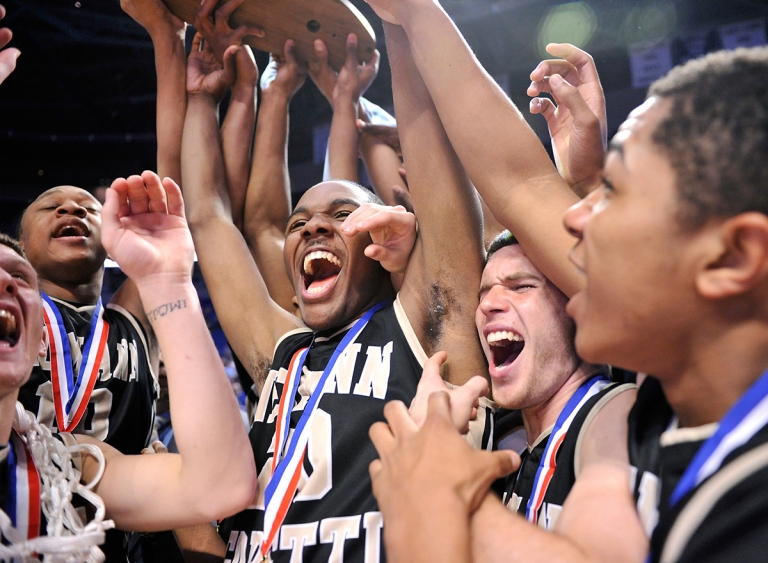 The Neumann-Goretti High School basketball team celebrates their victory over Montour High School 48-45 in the in the PIAA AAA state championship at the Bryce Jordan Center at Penn State March 23, 2012. / Photo by Chloe Elmer 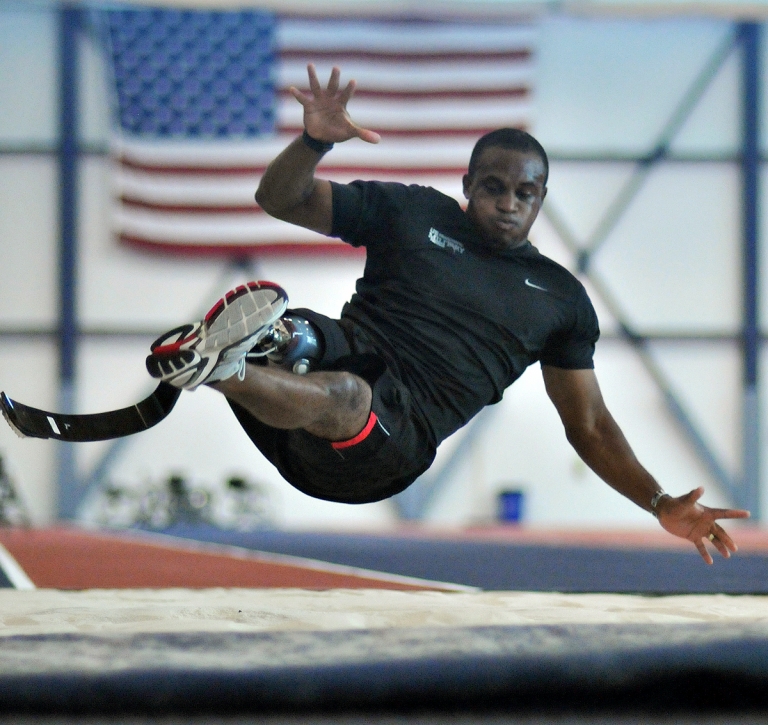 Kortney Clemens, a Kentucky University graduate student in curriculum studies, shows students and members of the Penn State baseball team about the Paralympics track & field division by routine drills on Sept. 25 in the Multi-Sport Indoor Facility at Penn State. Clemons lost his leg in a bomb explosion in Baghdad in 2005 and now competes with a prosthetic leg. / Photo by Chloe Elmer 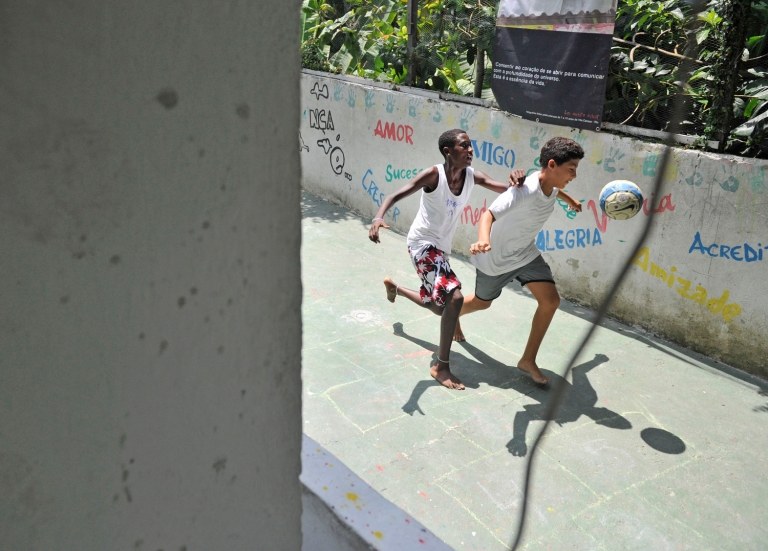 Students play soccer in the courtyard of the Para Ti school in the Vila Canos favela in Rio de Janeiro. The pickup game was one of the sights seen by a tour group walking through the favela, or shantytown, Monday, March 5, 2012. Favela tours are becoming more popular as police units take control of -- or "pacify" -- the communities. The Para Ti school receives a portion of the proceeds from trips organized by Favela Tours, a group that guides people through both the Rochina and Vila Canoas neighborhoods in Rio. / Photo by Chloe Elmer 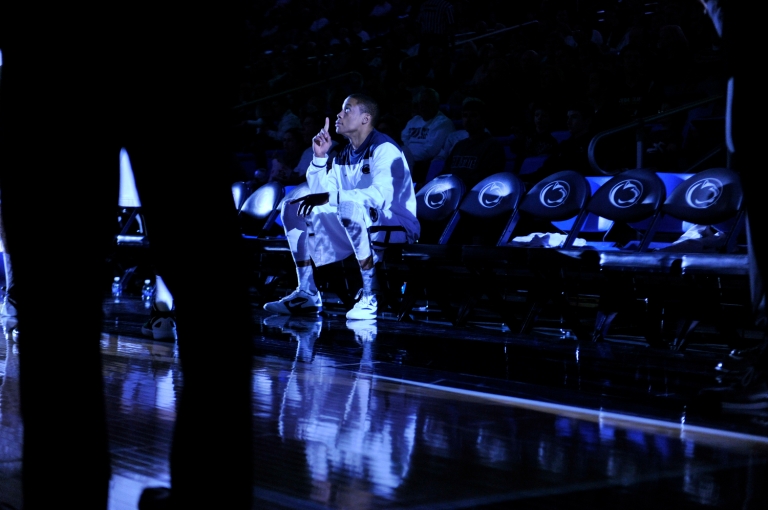 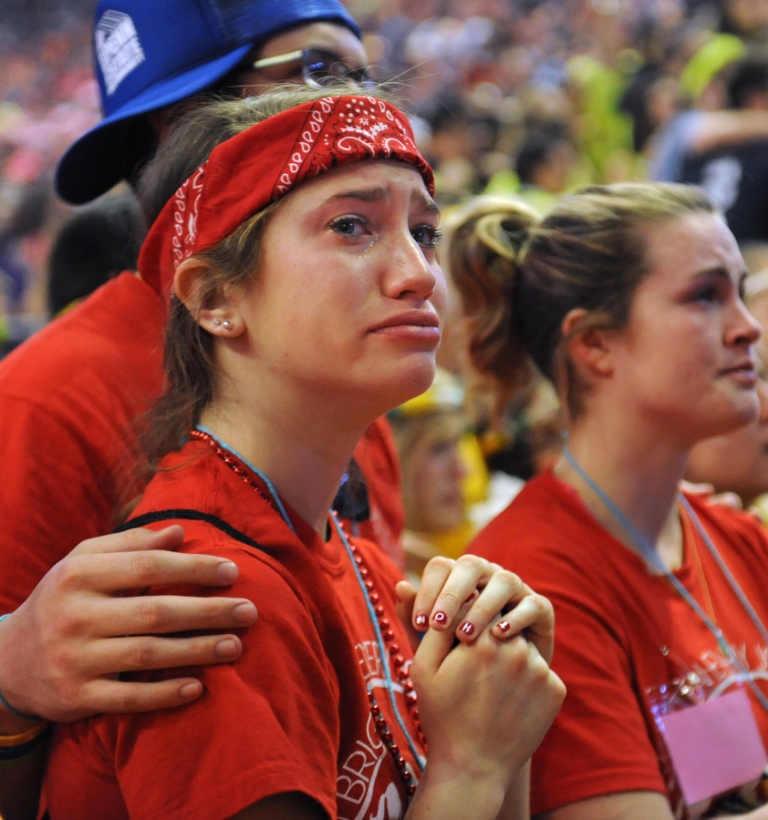