Before The Music Fades

Kindergarten was a big year in Matt Fell’s life.  He did not know it yet, but as he was dragged along to piano lessons with his older sisters, he was being introduced to his passion. As he learned the chords and the notes, Fell began to find the love for the music.

Just as he was finding the love for music his own body began to take it away from him.

Fell went in to his nurse’s office at school for his first annual hearing test.  Something was not right.

Fell was diagnosed with progressive hearing loss.  “I went to this Otolaryngologist and figured out I had this hearing loss and it’s progressive so you have to monitor it and every year it gets worse and worse,” says Fell. 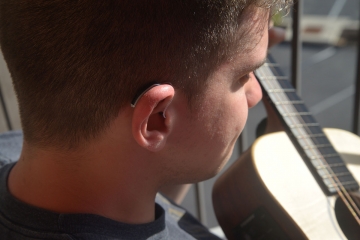 Matt Fell has been dealing with progressive hearing loss since he was in Kindergarten.  Since he was diagnosed he has been using hearing aids to offset the growing disability.  Even with the hearing loss, Matt still finds comfort in strumming the guitar on his porch overlooking State College.

After the diagnosis he continued to play the piano and got “quite good at it,” says Fell modestly.  He got into acting and performing in plays; he played the trumpet, the drums and eventually the guitar.  For now he has hearing aids that work and prolong the hearing loss.

As Matt got to high school, rocking out to his favorite U2 songs were not enough.  “Writing was always something I wanted to do… I just didn’t know how to do it,” Fell laughs recalling when he first started writing.  “I just really like listening to music and being like I want to create something,” says Fell. “I would just go into my basement after school and just write and that eventually got me into recording and production.”

At first it was, “Pretty terrible” as he laughs about it.  When Fell described his first song he says,  “Everything was all wrong… When I listened to it a few weeks ago I was like, what was I thinking?” Today Matt says he’s, “More confident now, definitely not one hundred percent.”

Fell says his music fits into the, “pop alternative genre.”  He goes on to say, “I think my sound right now is a combination of all the artists I grew up listening to… That mesh of sound.”

In college at Penn State, Fell and his friends decided to start a band and play at the bars in State College and developed a following. Fell even got to showcase three original songs in the Battle of the Bands at Penn State and has performed at THON.  THON is a 46-hour dance marathon that raises money for pediatric cancer.  It is the largest student-run philanthropy in the world.  For Fell, who is involved in committees for running THON, this was a huge deal.

Even with all the short-term success, Fell’s biggest fear is the audience reaction.  “My main goal is just to get people to understand what the song is about… Or just connect with them on some level,” says Fell.

He describes the difference between covering music of famous bands at the bar that everyone knows the words to compared to playing your own work that is unknown.  “When you play your own song it’s really terrifying,” Fell says.

He says that with experience comes confidence and it gets better the more he plays.  Matt is not going to allow his hearing disability mess with his future.  He does not see a day where he is not writing and recording music.  Since he knows all the different instruments, it allows him to write every single part of each song.  It gives him full control over his art. Fell says, “What I do with home recording and everything I can do the rest of my life, It’s not something I will ever stop doing…  One day I’d like my music to be heard by a lot of people and connect with a lot of people,” but for now, “I’m going to keep on doing what I’m doing,” says Fell

Michael Watson is a senior from Wyckoff, NJ, majoring in Broadcast Journalism with a minor in Business.  Mike is a member of PSU ComRadio and has a talk show that airs weekly.  Mike is interested in a career in Radio or Television as a talk show host or producer.  You can reach him via email, .(JavaScript must be enabled to view this email address) and follow him on twitter @WATSuppSON

Report: 18 Cities in PA With Higher Lead Levels Than Flint