For some Penn State students, football fandom doesn't just start on Saturday. To get the best seats in Beaver Stadium, dozens of students camp out for days before each home game to earn themselves a front row seat. The tent community that gathers outside Beaver Stadium is known as Nittanyville.

Darian Somers, a junior majoring in print journalism, has participated in 21 campouts since his freshman year. 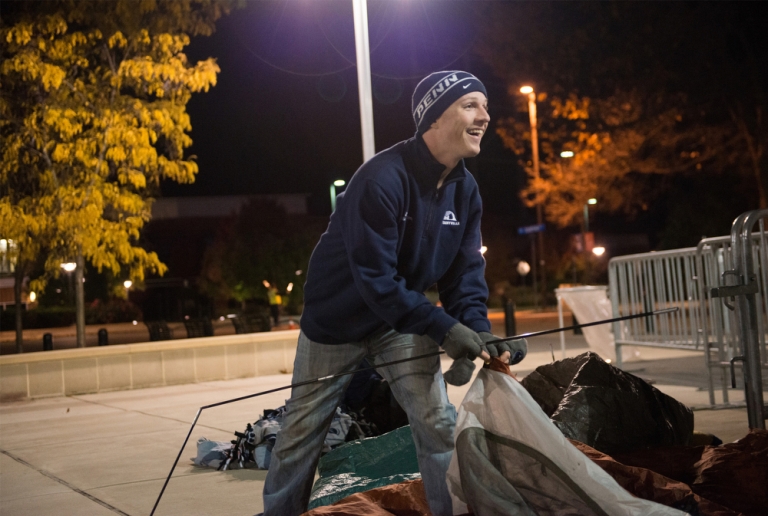 Darian Somers, a junior majoring in print journalism, sets up his tent at Nittanyville on Wednesday, October 29, 2014. Students participate in Nittanyville, an organization that camps out outside Beaver Stadium to be able to sit in the front rows of the student section for Saturday's game, bond with friends, and support their favorite players. Somers has been Penn State football fan for as long as he can remember and has participated in 21 campouts since his freshmen year. / Photo by Caity Kramer 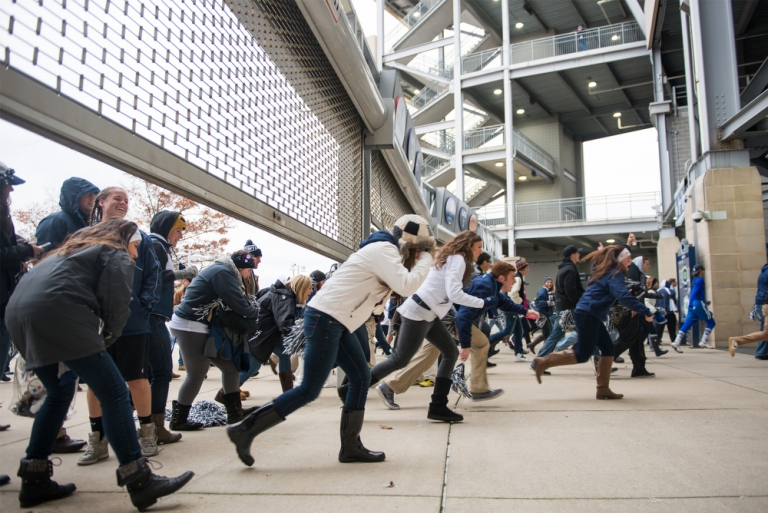 Nittanyville campers rush under Gate A after camping out for days at Beaver Stadium hours before the kickoff of the match against Maryland. Students participating in the campout are typically required to enter the stadium about two hours prior to kickoff. It is an exciting time for many, as students sprint to find their front row seats that they camped out for all week. / Photo by Caity Kramer 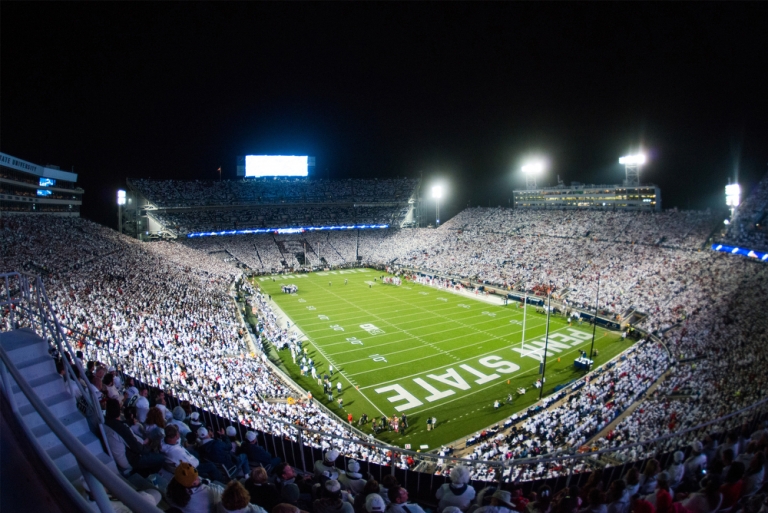 Over 107,000 Penn State fans pack Beaver Stadium on Saturday, October 25, 2014 for the full stadium "whiteout" game against Ohio State. The Nittany Lions were defeated by the Buckeyes with a final score of 31-24 in a double overtime. / Photo by Caity Kramer 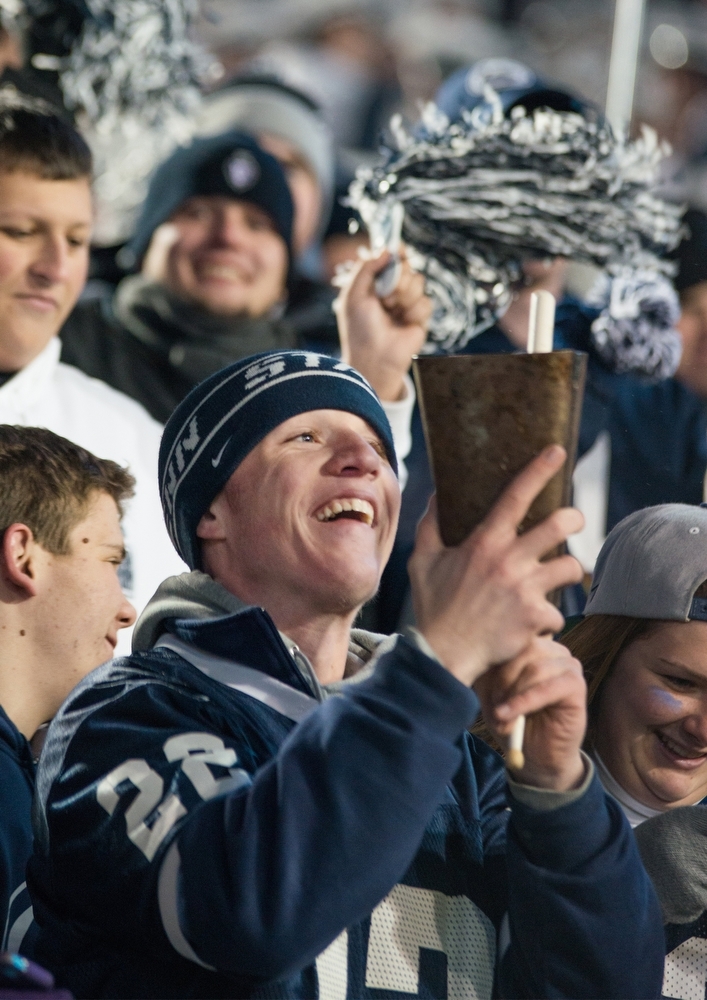 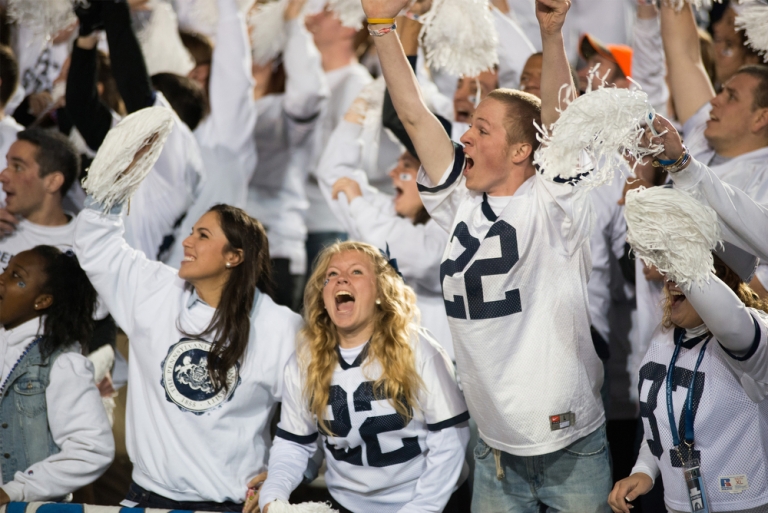 Somers and his girlfriend, Anna Ungar, a senior majoring in visual communications, celebrate a Nittany Lion touchdown during the Ohio State game. Though Penn State lost to the Buckeyes, the game kept fans excited through two overtimes. "There's such a bond and a shared feeling for Penn State, and that's why I love it. At the end of the day, you want to see Penn State win, and that bond is strong," Somers says. / Photo by Caity Kramer 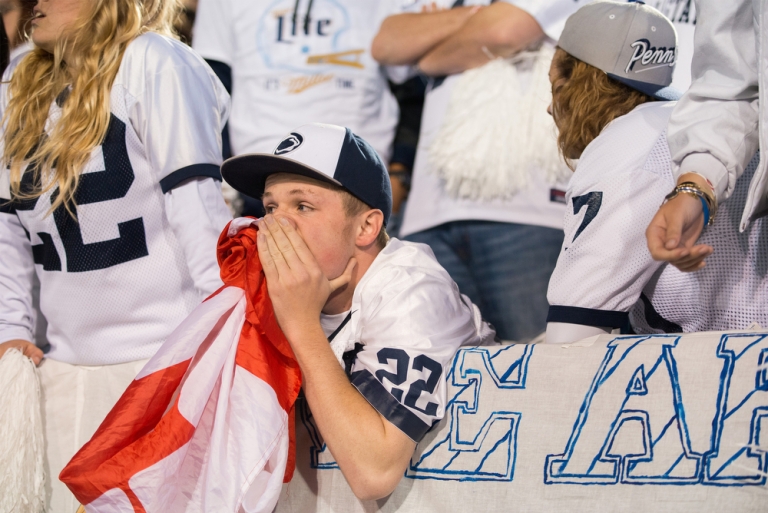 Somers holds his breath during a game against Ohio State as referees review a play. Front row seats allow students to become more invested in the game-day experience. Somers, especially, finds an emotional attachment to the game. "I was taught Penn State football was the only thing that mattered on Saturdays," he says. Somers also clutches a Canadian flag to display in support of running back, Akeel Lynch (22), who originates from Canada. / Photo by Caity Kramer 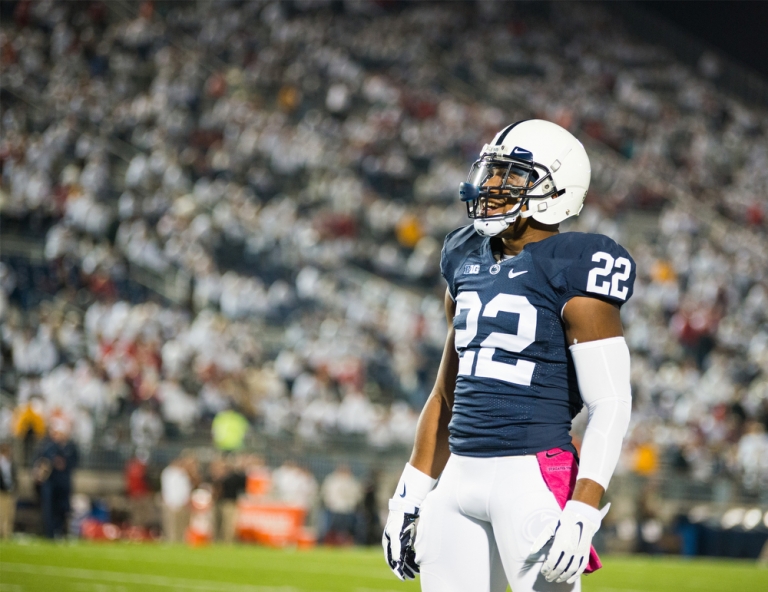 Penn State's Akeel Lynch (22) smiles at the student section before the Ohio State game on Saturday, October 25, 2014. Nittanyville campers have the option to create banners to support their favorite football players throughout the season, which is a longtime tradition at Penn State. Somers' Nittanyville group created a banner, sported number 22 jerseys and held a Canadian flag for Lynch this season. / Photo by Caity Kramer