LONG POND, Pennsylvania – Fans flanked the entrance of the media center on Friday, waiting for a chance to see six-time Pocono winner Jeff Gordon in his final season – and his first race weekend in Penn State colors. 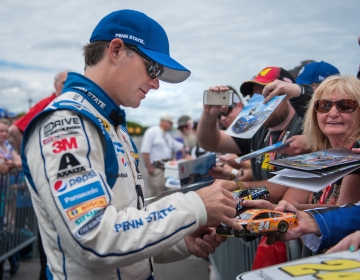 Most of the Gordon faithful were equipped with pen and paper while some held miniature versions of his No. 24 car aloft, hoping to get the driver’s signature scrawled on the hood or roof.

He stopped to sign autographs before strolling into his afternoon press conference, his face shaded by the blue twill of his cap. A white Axalta logo graced the front, while “Penn State” was stitched just above the temple. It complemented his blue-and-white fire suit, still a bit ruffled from an earlier practice run that featured a bumpy turn.

Through a partnership among the university, Pocono Raceway and Axalta, a Philadelphia-based coatings manufacturer, Gordon’s specialized gear this weekend – his car has “Penn State” emblazoned in white over a Navy blue paint job on the back quarter panels – is aimed at showcasing the intersection of business, engineering and education in Pennsylvania.

The deal was announced in April, when Gordon drove the car at the University Park campus.

“It’s amazing,” he said. “We had a chance to go over to Penn State and visit with the students and faculty and the group of engineers that are doing so much to be the future of companies like Axalta or the future of racing.”

Axalta, which sponsors Gordon and Sunday’s race, the Axalta ‘We Paint Winners’ 400, is hosting about 100 Penn State business and engineering students this weekend. On Saturday, the students will meet with Axalta executives and tour Gordon’s garage. After a panel discussion with Axalta, NASCAR, Pocono Raceway and Hendrick Motorsports executives, they are to attend a special dinner hosted by Gordon. His fire suit, however, will be left at the track.

Axalta and Gordon worked on a similar weekend last year with Texas A&M, the alma mater of Charlie Shaver, the company’s president and chief executive.

“The Axalta ‘We Paint Winners’ 400 truly is a home state venture which makes it particularly exciting for us and, we believe, for our partners as well,” Shaver said. “Recruiting top talent from a terrific home state school will enable Axalta to continue to grow and continue to give back to our state-wide community.”

Friday’s practice gave the drivers time to adjust to the 2.5-mile “Tricky Triangle,” with several complaining that the track was rough around the so-called tunnel turn at the top of the course. “Everyone might be calling it bumps, but I think it’s big enough to it a jump,” driver Joey Logano said.

As the drivers tested the track, fans wound through the infield and grandstand, many decked out in the gear of their favorite driver. Some even donned fire suits of their own. One brought a limited edition Monte Carlo, its dash signed by Gordon himself.

“It’s kind of a year of just appreciation for his career,” said fan Anthony Buzzella, who watched Gordon’s practice. “It’s just taking in everything: the practices, the qualifying, seeing him race. … Any car he’s driven here has been a threat.”

Gordon, who finished fourth in qualifying, has been comfortable in Pennsylvania. He leads all active drivers in wins (six), laps led (1,037) and top five finishes (19) at Pocono, NASCAR’s only Sprint Cup track based in the Keystone State. He said he recognized the considerable presence both NASCAR and Penn State have in the state during his visit to State College.

“It really sunk in when we went to the campus and saw the excitement when I drove this Penn State blue-and-white car,” Gordon said. “It’s just like when we did the thing with Texas A&M, there’s added pressure to go out there and get it done on the race track to make them proud of the car they’re being associated with on that No. 24 car.”

Wearing a “24” T-shirt and holding a model of Gordon’s car, Joseph Katona of Junedale, Pennsylvania, was among those hoping to see something special on Sunday.

“I’m looking forward to getting his autograph and seeing that Penn State car in victory lane,” he said. “It’s sad to see him go.”

(This story was first published June 5, 2015 in the Centre Daily Times. Roger Van Scyoc is a student in the John Curley Center for Sports Journalism at Penn State.)

Concussions: Cause for Concern