On the Job at Penn State

Thousands of employees work behind the scenes each day in support of Penn State students. Introduction to Photojournalism (COMM 269) students photographed some of those workers on October 7, 2014. 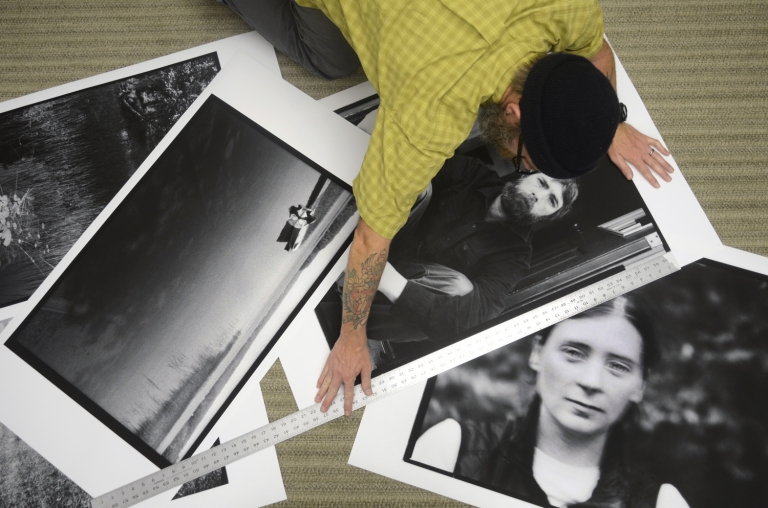 Eric Roman, a marketing communications specialist in the School of Visual Arts, measures prints made with a traditional view camera at his office in Borland Building on Tuesday, October 7, 2014. Photo by Akash Ghai / Photo by Akash Ghai 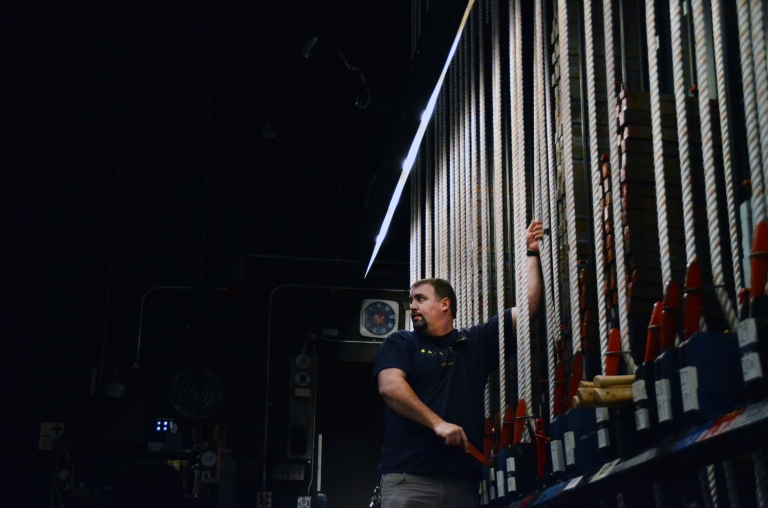 Chad Swires, a production supervisor at the Center for Performing Arts (CPA), sets up for "Timber!" in Eisenhower Auditorium at Penn State Oct. 7, 2014. Swires, who has worked for CPA for four years. said his favorite part of his job is the people he gets to work with. / Photo by Emily Chappell 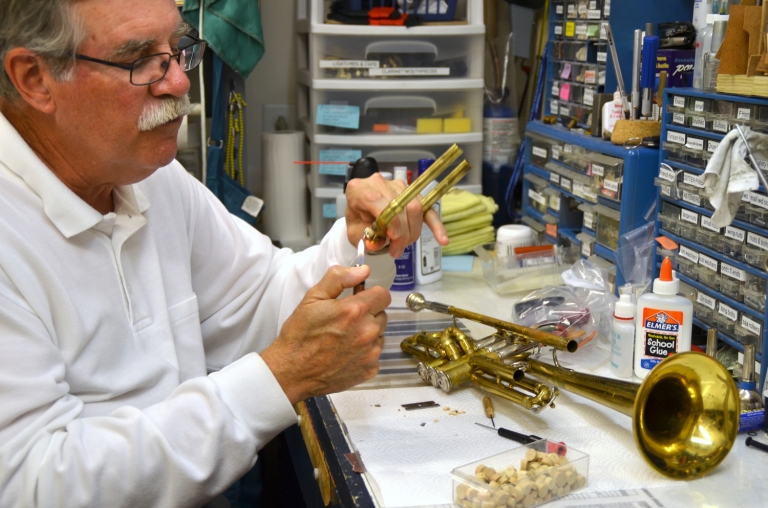 Dave Cree fixes a trumpet in his office at the Blue Band Building on Tuesday Oct. 7, 2014. Cree has been a volunteer for the Blue Band for 23 years and was previously the band director at Bellefonte Area High School. / Photo by Rebecca Lindenberger 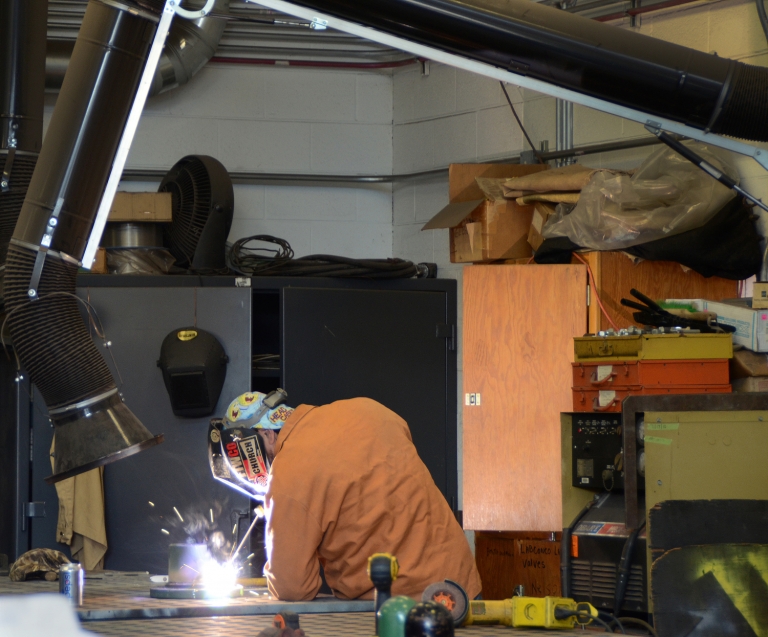 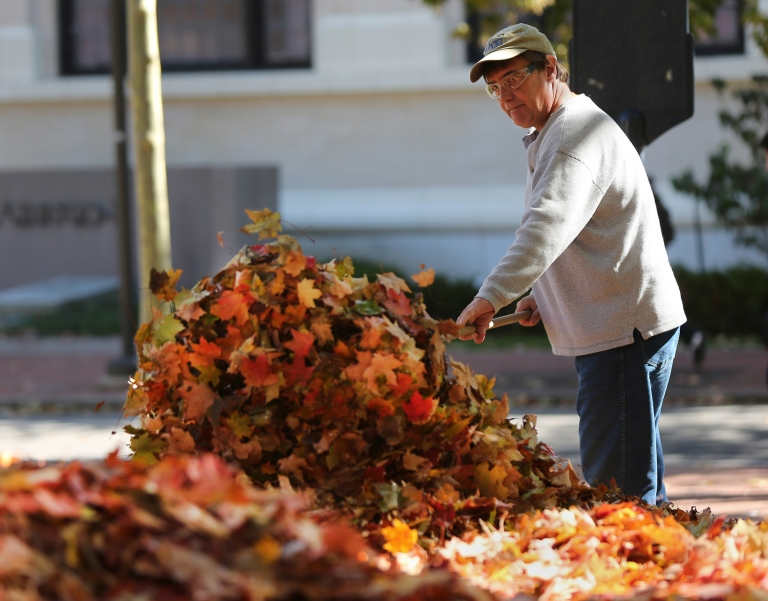 Chuck Wendler, a landscape worker for the Office of Physical Plant, rakes leaves next to Pollock Road at Penn State on Oct. 7, 2014. / Photo by Ateeq Alhameli. 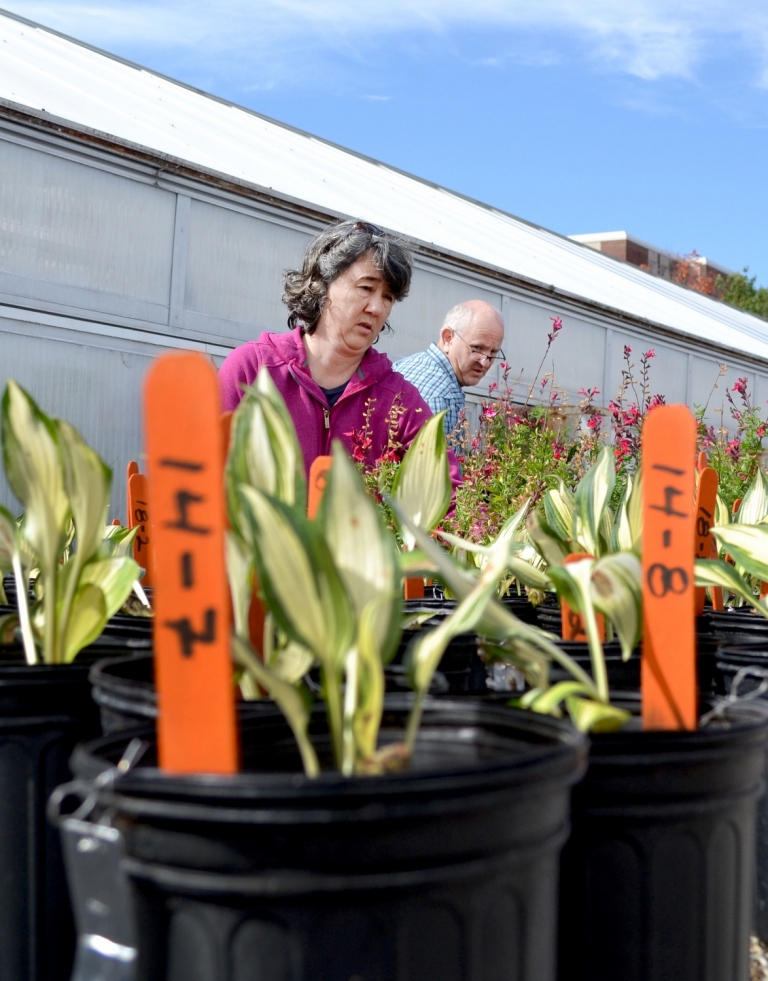 Retha Sellmer, left, and Rick Bates prepare for a fertilizer experiment outside of the Penn State greenhouses on Oct. 7, 2014. Sellmer and Bates have been working for the College of Agricultural Sciences at Penn State for over 15 years. "We conduct experiments every week to learn more about our plants," said Sellmer. / Photo by Danielle Gallo 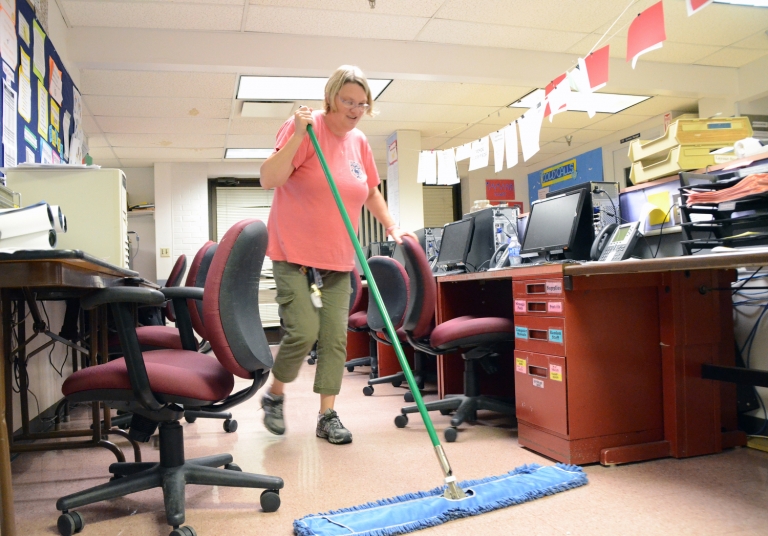 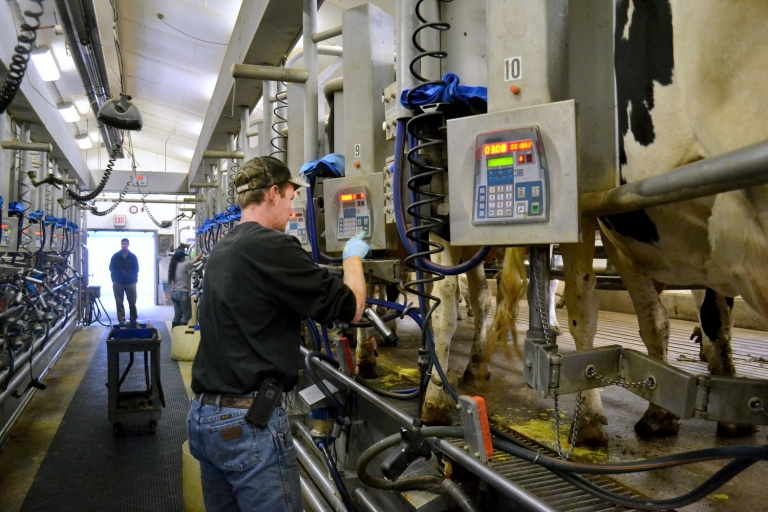 Ray Dreibelbis adjusts the settings on the automatic milking system during the second milking of the day at the Penn State dairy farm on Oct. 7, 2014. Drebelbis is a State College native who has been working at the dairy farm for just over a year. "I've always loved working with cows and on farms so this just seemed like the right place for me," Drebelbis said. / Photo by Danielle Gallo 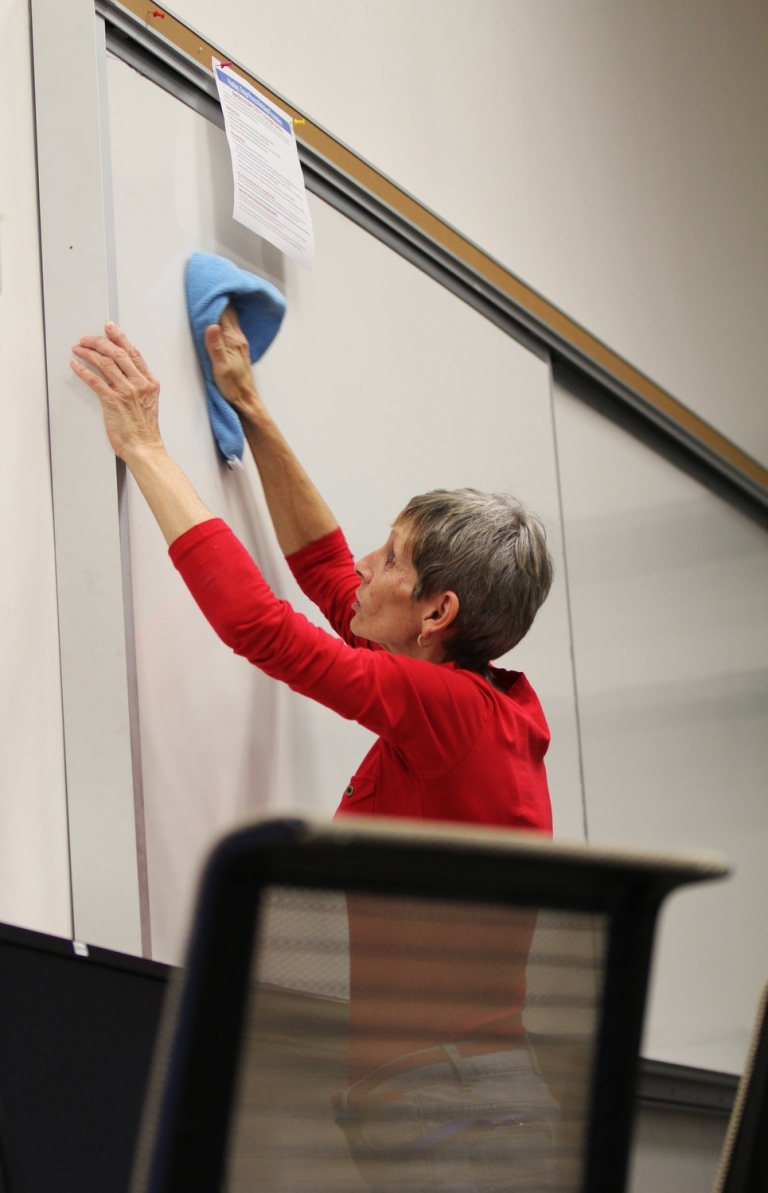 Peggy Page, a custodian at the Carnegie Building at Penn State wipes down a white board during her evening shift on Tuesday, Oct. 7, 2014. Page, originally from York, Pa., has worked as a custodian at Penn State for the past 11 years, and was previously employed as a nurse for 23 years. / Photo by Sophia Hubler 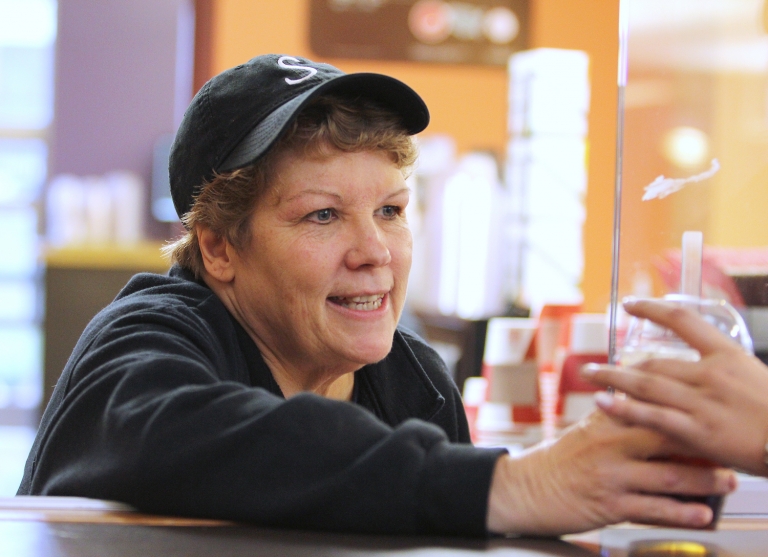 Patty Dills, a food production worker at Redifer Commons' Higher Grounds Cafe, hands a customer a drink on Tuesday, Oct. 7, 2014. Dills, who has been employed at Redifer Commons since August 11, 2014, previously worked for the State College School District as a student job coach and mentor for special needs students. / Photo by Sophia Hubler 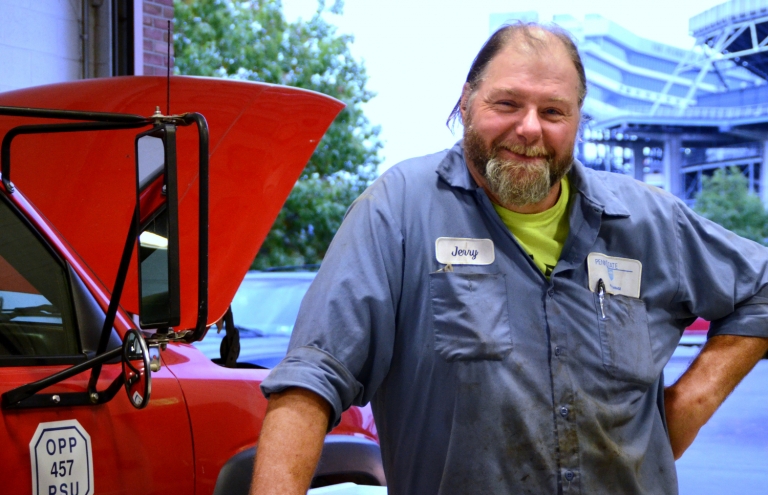 Jerry Witherite, an auto technician, poses for a photograph while on the job at the OPP auto repair facility near Beaver Stadium on Tuesday, Oct. 7, 2014. Witherite has worked at Penn State for 25 years. . / Photo by Alexa Lewis 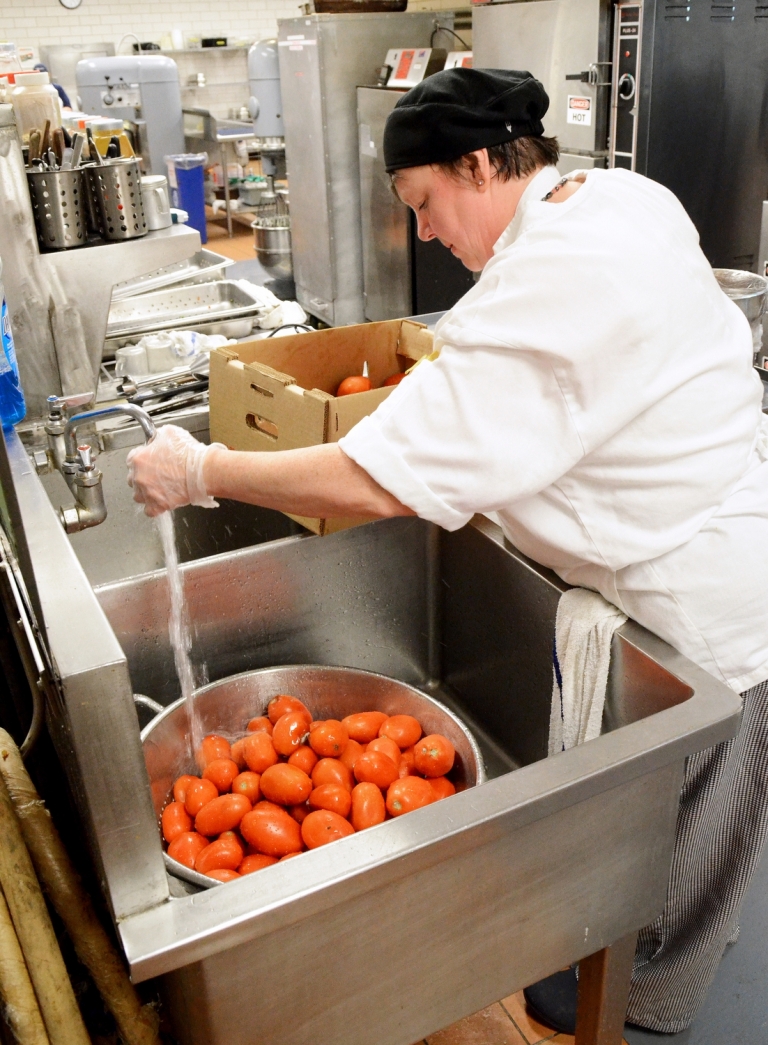 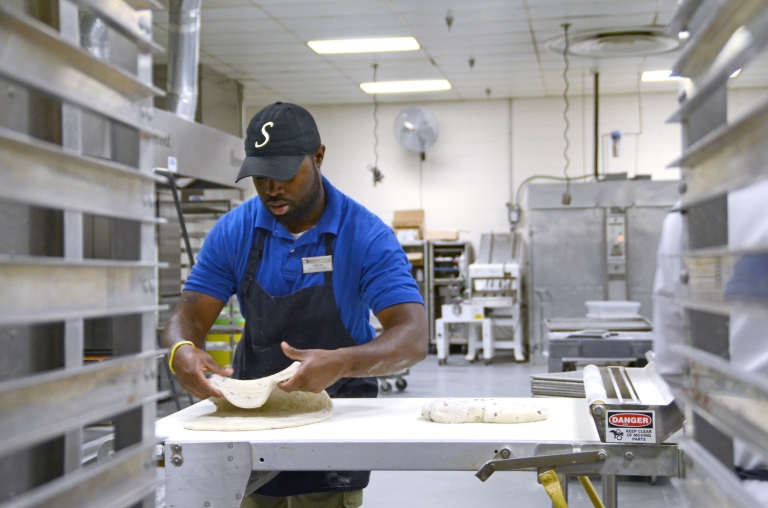 Carlos Jackson, a worker at Redifer Commons, prepares a batch of bread to be sent to various eateries around the Penn State University Park campus. Jackson acts as a relief worker for Housing and Food Services. He said he will be working in the bakery for three days. Jackson is currently an MBA student at Penn State. / Photo by Mary Mahoney 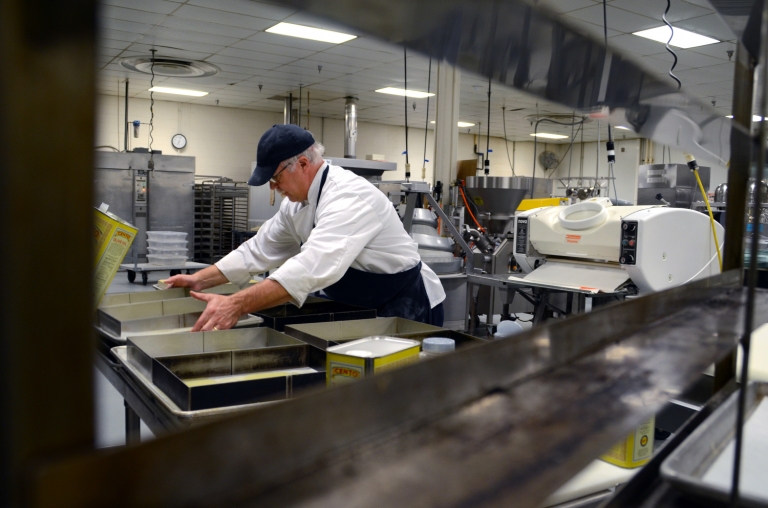 Michael Conron, a Penn State bakery operator, prepares a batch of bread to be sent to various locations around campus on Wednesday, Oct. 7, 2014. Conron has been working in the bakery for eight years. He started working in the donut department and has been in the bread department for the past year. "Making focaccia bread is my favorite," said Conron. Photo by Mary Mahoney / Photo by Mary Mahoney 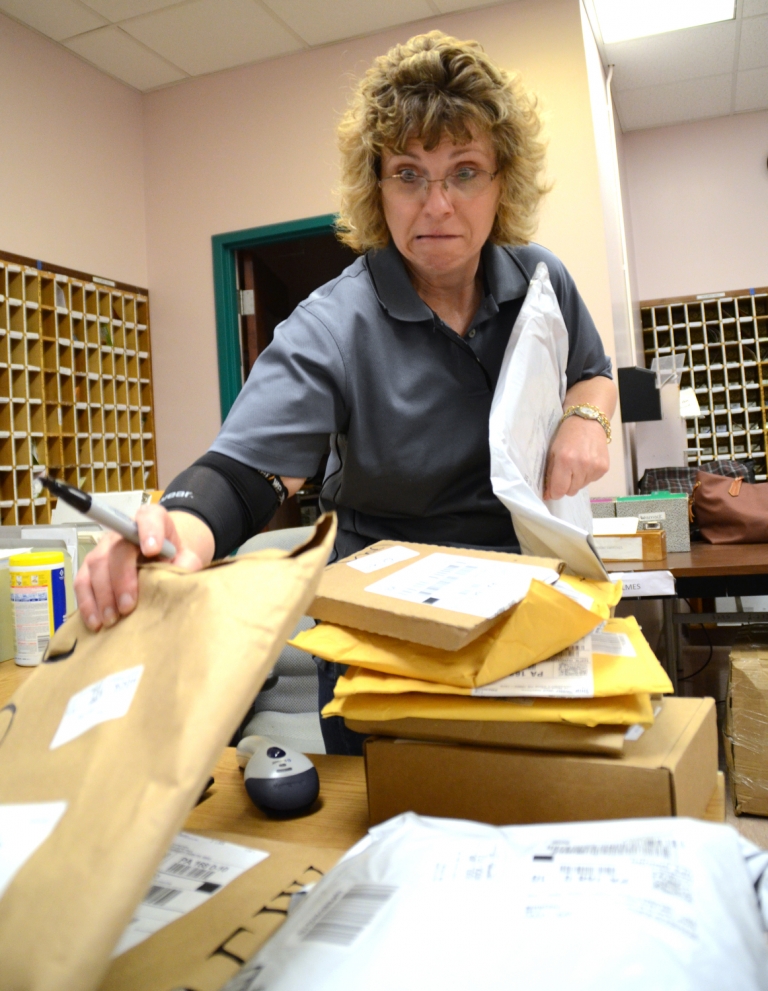 Billie Rockey, a desk worker at Warnock Commons in North Halls, reacts while sorting through resident mail Oct. 7, 2014. Billie has been working at Penn State for 26 years. / Photo by Gabrielle Mannino 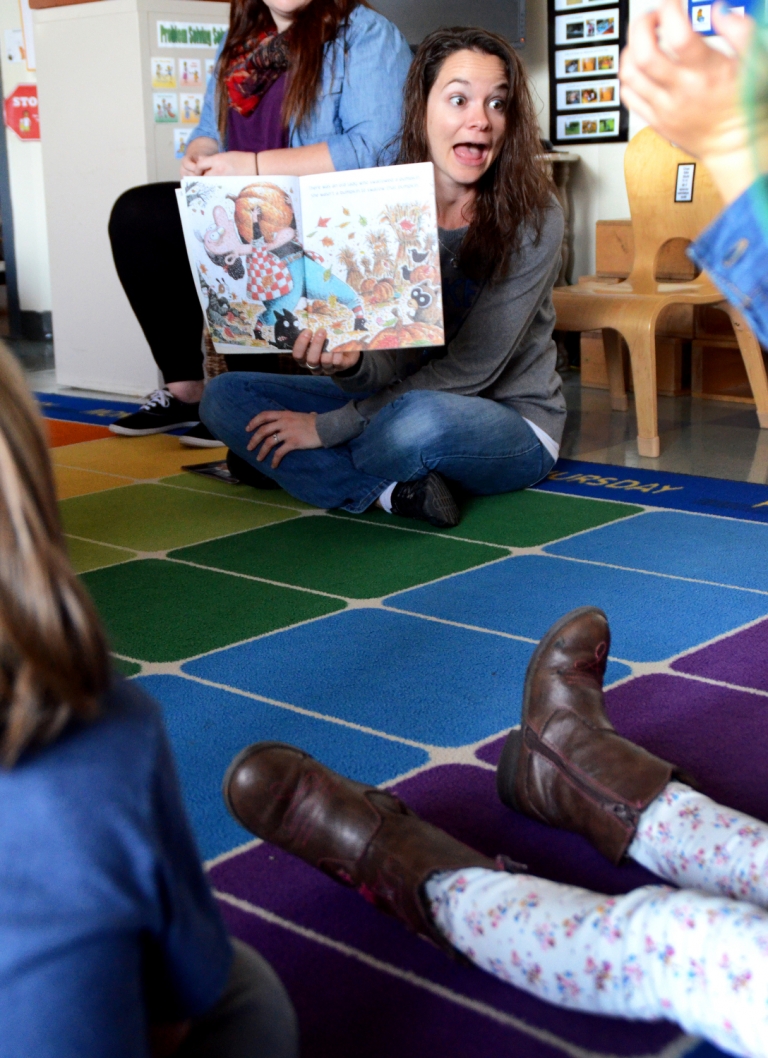 Amanda McGonigle, a preschool teacher at the Bennett Family Center, reads the book "Even Monsters Need Haircuts" to her class on Tuesday, Oct. 7, 2014. The 'Garden of Wonder' class enrolls children ages three to five and focuses on emergent curriculums. The lesson plans vary based on what the students want to do. "Lesson plans change every hour, every day and every week. As teachers, we plan ideas out for the month that we think the class will like, but it all depends on how the children respond to it, so things develop as we go along," McGonigle said. / Photo by Bridget Markham 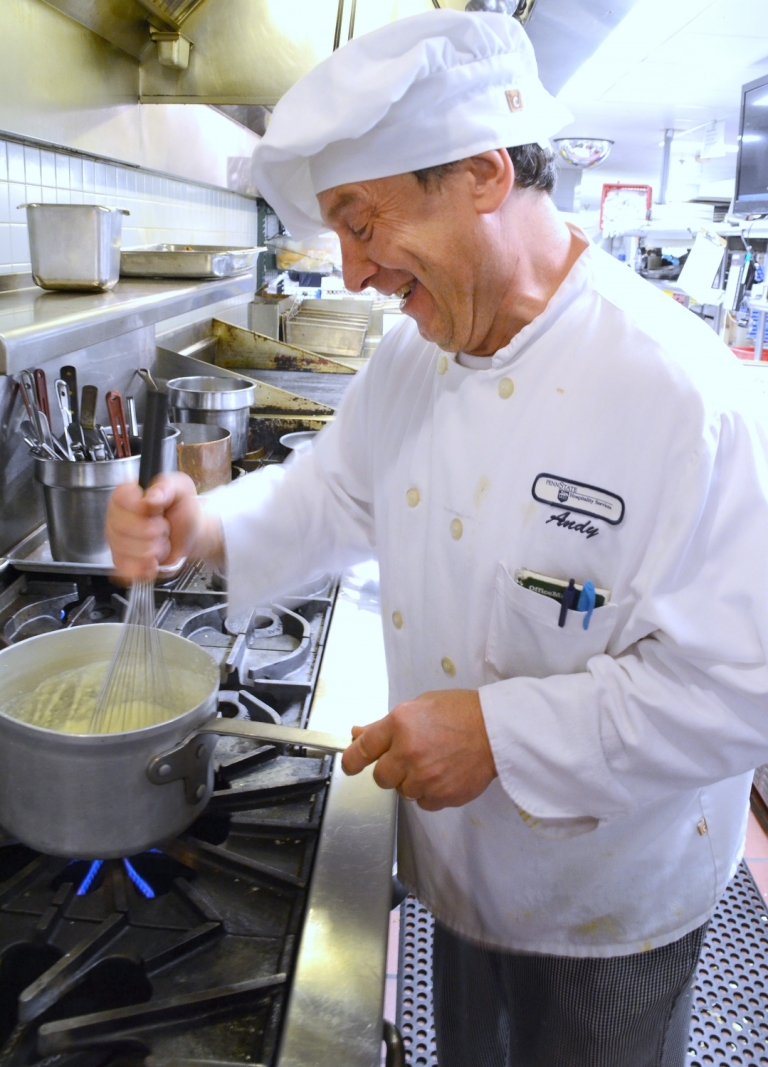 Andy Sefter, second cook at The Nittany Lion Inn prepares for lunch on Tuesday, Oct. 7, 2014. He has been part of the Inn's culinary staff for 29 years. Andy said he is a breakfast person at heart and when asked he'll tell you with a smile that omelets are indeed his favorite, especially when packed with ham and cheese. / Photo by Marissa Miller 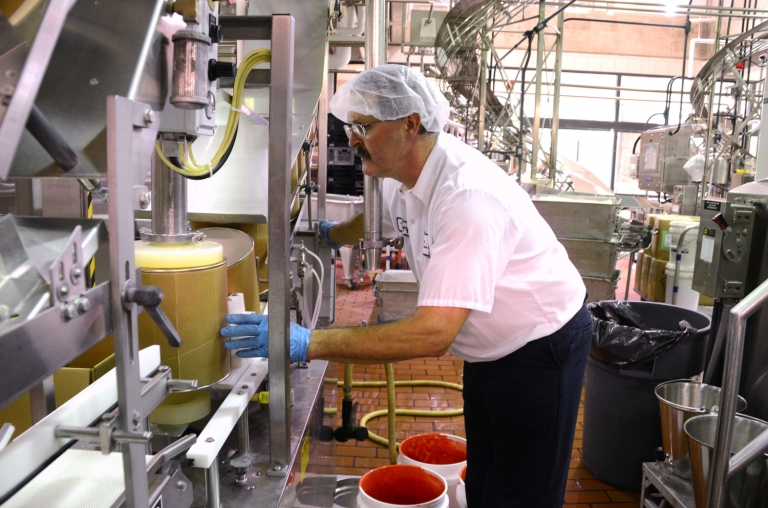 Terry Grove, ice cream processor at Berkey Creamery, makes pumpkin pie ice cream on Tuesday, Oct. 7, 2014. Grove has worked for the Creamery for eight years. Terry makes hundred of gallons of ice cream each day and despite vanilla being the most requested by customers, Terry's favorite flavor by far is the classic chocolate chip cookie dough. / Photo by Marissa Miller 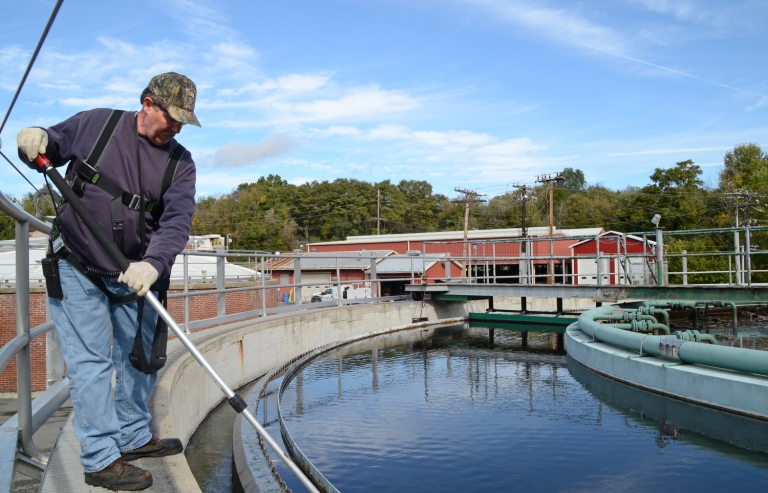 Jim Kyle brushes the inside of a wastewater filter on Penn State's Wastewater Treatment Plant on Oct. 7, 2014. Kyle brushes two of the same filters with a battery-operated brush everyday to prevent algae buildup. "The algae grow very rapidly. What is here was not here yesterday", Kyle said. / Photo by Joel Wee 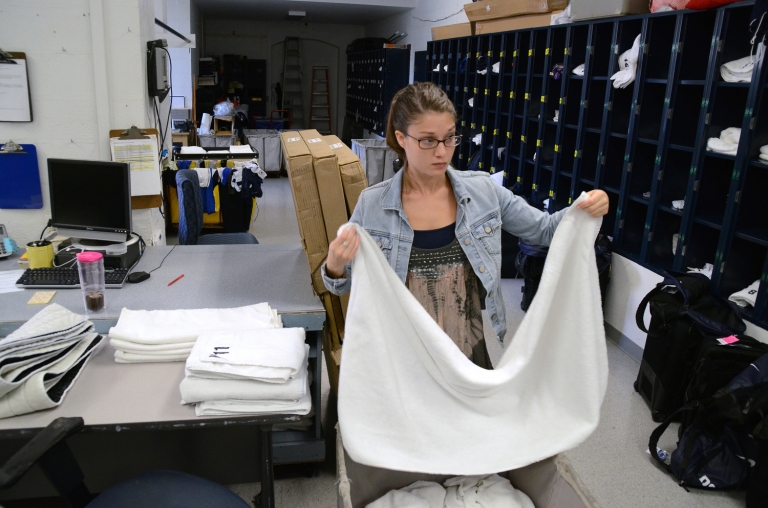 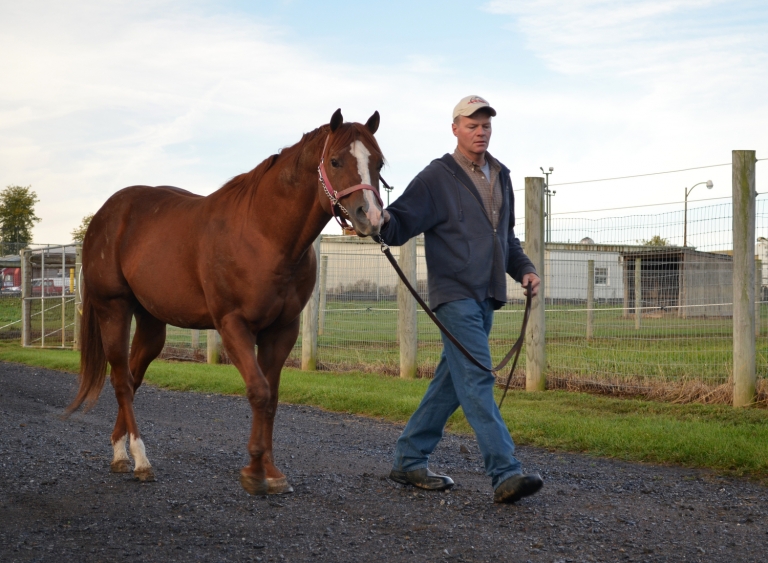 Chris Grant, assistant manager of the Penn State Horse Barns, leads a stallion on Tuesday, Oct. 7, 2014. Grant has been an employee at the horse barns for 10 years. / Photo by Brian Yearick 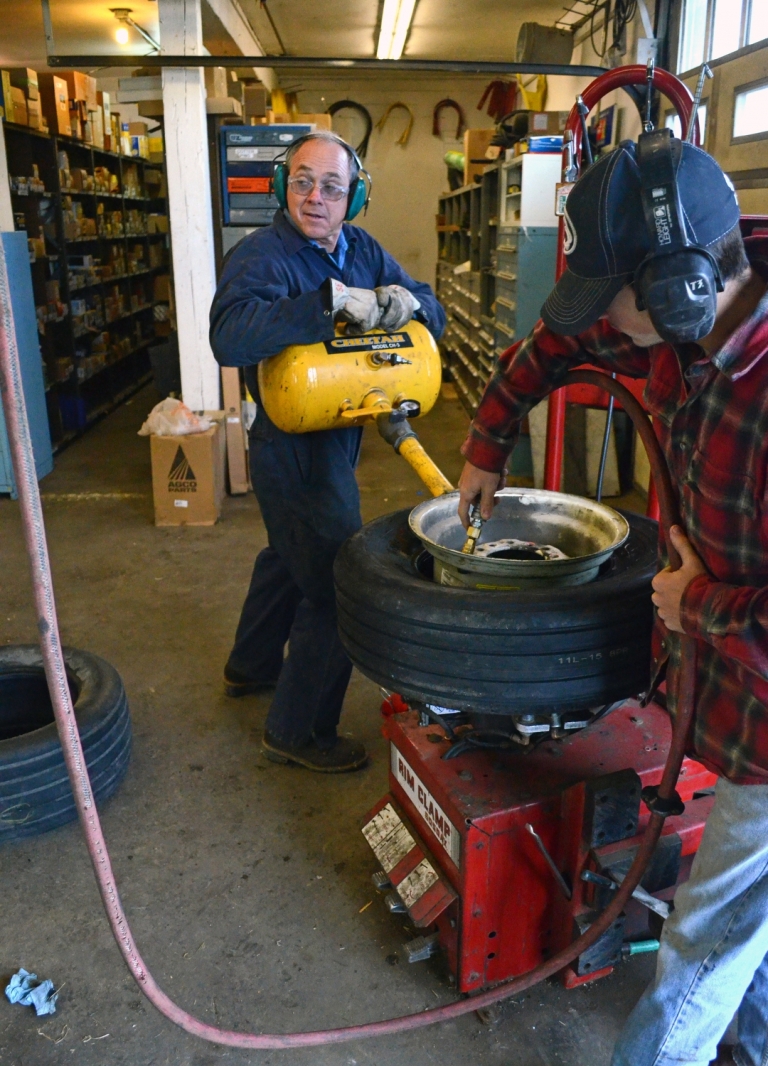