Preparing for a virtual THON 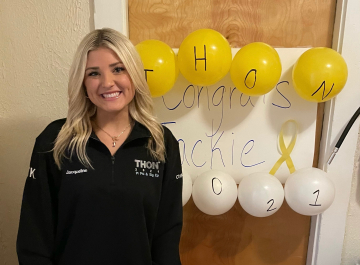 Jacqueline Strobel has participated in THON all four years she has been a student at Penn State. Photo by Shea Sugrue

Penn State senior Jacqueline (Jackie) Strobel says she is thrilled to be dancing in THON this year.

She was previously involved with THON’s Dancer Relations committee and the Pi Beta Phi organization. She says she has been physically preparing for this year's THON by exercising, eating healthy and getting plenty of rest.

Although THON won’t be in-person this year, Strobel says she is still very excited to be dancing for the kids, virtually, alongside all of her supporters.

A Year Without The BJC

Penn State Dance Marathon, or THON, is going to be held completely virtual this year for the first time in history. 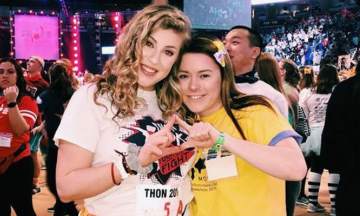 Bridget Horan, left, stands on the floor of the Bryce Jordan Center with Penn State senior Carmen DiPippo during THON 2020. DiPippo is one of 592 students who will be dancing virtually at THON 2021. Photo by Emma Creamer

THON 2021 is a student-run philanthropy dedicated to enhancing the lives of children with childhood cancer. Run by Penn State students, different organizations spend the year fundraising and planning for a weekend mid-february since THON’s start in 1973.

This year, THON announced in August that it would be held virtually due to the pandemic and concern for student’s safety. This year, the dancer total is at almost a fifty percent decrease from what it has been in past years. Instead of the typical around 1,000 dancers, there are 592.

Carmen DiPippo, Senior — Broadcast Journalism (pictured in yellow shirt), is among one of the 592. She will be dancing for Penn State’s dance company Vole. DiPippo’s involvement in THON started freshman year and she has worked her way up to being a dancer in this year’s THON through her active involvement in Vole and internal THON Committees such as being a Dancer Relations Committee Member and on the Rules and Regulations committee this year.

Jeff Brna finally gets to dance in Thon — but will it meet his expectations?


Senior Jeff Brna has long dreamed of dancing in Thon - and he’s finally getting his chance. However, with the event going virtual, it’s not exactly how he envisioned it. How will Brna respond to the virtual version of his dream event?

THON: Virtually For the Kids

This is Kelly Cook's first year of being a THON Dancer, even though she said she has been involved with THON before even came to Penn State. 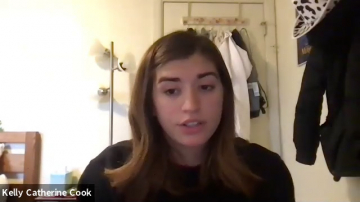 Kelly Cook is dancing for the Apollo organization. Photo by Annie Shih

Cook is a senior studying food science, and this year she is dancing with three other girls for her organization, Apollo — a special interest organization delicates to THON.

Since everything becomes virtual this year, Cook said she still had some fun making Tik Tok videos with the THON families. Members of Apollo support their three THON families by bonding with them through virtual regular meetings and events.

Cook shared her thoughts of THON going virtual and how she is getting prepared for her first dancing experience.


Lincoln Weinstock, 21, and senior at Penn State, has finally received the chance he has been waiting for — dancing in THON 2021. 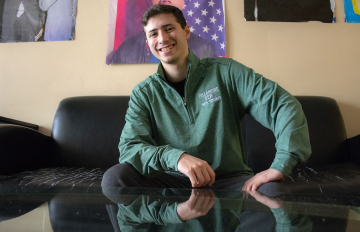 Lincoln Weinstock is dancing in THON 2021 as an independent. Photo by Alli Dowe

Weinstock grew up heavily influenced and inspired by THON, and his passion continued when his neighbor was diagnosed with Leukemia in the third grade. Her persistence fighting cancer inspired Weinstock to become involved in THON, and eventually reach the goal of dancing.

This year, Weinstock dances as an IDC, also known as an Independent Dancer Couple, where he and his partner entered a lottery system in the hopes of being picked. The IDC process requires couples to raise $2,800 to guarantee one ticket, and then raise $600 for every additional ticket.

Although THON may be virtual due to COVID-19, Weinstock's persistence through this troubling time shows that his fight to aid in the end of pediatric cancer is not over. He and his partner plan to make the most of the situation, and try to recreate the Bryce Jordan Center experience as well as they can in their apartment.

Creativity a must for THON 2021


A historical THON season leads to committees, organizations, and all members to think outside the box, and that is exactly what 46 LIVE is doing this year.

The Bryce Jordan Center was filled to capacity for THON 2020. This year, only the production crew, performers and cardboard cutouts will be in the building. Photo by Connor Griffin

Connor Griffin of 46 LIVE tells the story of his first experience working a THON, and how he and his team had to be extra creative and efficient this year. Connor tells us about the changes he and 46 LIVE are experiencing, his own personal feelings leading up to the big weekend, and why he got involved with 46 LIVE and THON to begin with.

The pandemic has caused virtually everything in the world to change and THON members are up to the challenge. Griffin and his team are looking forward to this year’s THON and are anxiously awaiting the challenges, yet joys that another THON season brings.

As the first-ever virtual THON weekend is just around the corner this year at Penn State, Morgan Sederquist thought she has to think of the situation as half glass full or half glass empty. 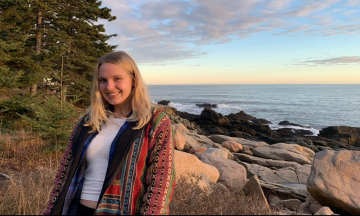 Although Morgan took her day or two of being upset about THON 2021 going virtual, she's still excited for the weekend for "a great thing to be happening."

Morgan is a senior nursing student at Penn State. She will be dancing in THON 2021 for Club Gymnastics.

Going into freshman year, Morgan didn't know anything about THON. But after she volunteered for a year at the Child Life program at Penn State Children's Hospital, it sparked her interest in being involved with THON, and were able to find her role in helping somebody who can't help themselves.

Lyndsay Stakem is trying to make her off-campus apartment feel as similar to the Bryce Jordan Center as possible this upcoming weekend. A junior majoring in Biobehavioral Health and the president of Penn State Global Brigades’ THON chapter, she is determined to make her first dancing experience as high-energy and fun as possible, despite THON’s virtual format.

THON, the world’s largest student-run philanthropy, spends each year raising money to fund pediatric cancer research and care, culminating in a 46-hour-long no sitting, no sleeping dance marathon in Penn State’s Bryce Jordan Center. Due to the coronavirus pandemic, this is the first year that THON will be virtual, live-streaming events and performances over the 46-hour period with dancers dancing from their homes.

Over the course of my career, I want to create engaging and entertaining content and work where my creativity is valued. During my entire 4 years of college, I have been working freelance for Barstool Sports, start up companies based in Boston, and even started my own business on my 22nd birthday. Throughout that time, I silently stacked my accomplishments, strengthened my skills, and ultimately made myself an asset for any company hiring. My favorite experiences in my field so far include hosting a surprise Jonas Brother concert, making global news reporting on the closing of Taco Bell at Penn State, directing the events coordination being the Barstool Sports College Football Show, and forming connections with some of the most talented and interesting people in the industry.

As a student journalist, my passion for writing and curiosity about the world around me has been the foundation for my journalistic work. Academically, I put everything I have into each piece I work on, and - whether it be mathematical, artistic, or journalistic - I give it my all. Previously, I had internships in various positions in both the television and newspaper industries. I am interested in pursuing a career in media, law, and politics.

My goal is to continue documenting stories that ignite and inspire the community, while remaining truthful and present. I hope to find a job with a news organization or magazine that continues to encourage and strengthen my skills as a photographer, a storyteller, and a creative. Eventually, I would like to go back to school to receive my degree in Art Education, and educate children on the wonders and importance of photography.