From head shops to medical marijuana dispensaries, State College business owners are preparing for the possibility that recreational use of marijuana at the state or federal level is a growing possibility.

Just two weeks ago, the House of Representatives voted to deschedule cannabis from the Controlled Substances Act by passing the Marijuana Opportunity Reinvestment and Expungement Act of 2019 (MORE Act). This has set a precedent for the future cannabis industry, although it is not likely to pass in the Senate, what would it mean to legalize weed in the federal level?

According to Forbes and Marijuana Business Daily, the cannabis industry is projected to bring in billions of dollars to the economy and Pennsylvania, being the fifth populated state, is projected to bring in hundreds of millions. In February, medicinal marijuana sales in Pennsylvania totaled $132 million, per Pa. Department of Health, and in November, the total has grown 500% to $524 million.

Sales topped the $500 million mark after two years of legalizing medical marijuana where more than 14 million products have been sold and yearly sales are expected to reach $1 billion in three or four years. Pennsylvania has more than 356,000 registered patients and 1,400 approved practitioners as of June 2020.

The state limited dispensary licenses at 50 and grower/processors permits at 25 - although 26 have been issued. Currently, there are 87 operational dispensaries as of June 25, 2020, according to Pennsylvania Pressroom.

In State College, a dispensary called Nature’s Medicines opened its doors in 2018, and now they have stores in both Bloomsburg and Selinsgrove. On the other hand, there are more than three head shops, and one has been around for 20 years.

Jamaica Junction, opened by Michael Hultberg in 2000, sells glass pipes, rolling papers, and many cannabis ingesting devices. Hultberg, also known as Uncle Mike, is recognized for his amiable personality and great deals, but he also faced legal challenges in 2013 when his store was raided and Hultberg convicted.

Hultberg pleaded guilty to a felony count of possession with intent to deliver and a misdemeanor charge of possession of paraphernalia with intent to deliver, according to a press release issued by the Centre County District Attorney’s Office. During the raid, more than 3,000 packages of synthetic marijuana across 28 brands were seized as well as thousands of devices used to consume the illicit drugs.

Hultberg was released with probation a year after serving his sentence and he got back into business by bringing in inventory from his other stores. In three years, he could file for the expungement program Pennsylvania grants residents that are over 70 and has not been convicted for a new offense within ten years of completion of sentence.

Even if he doesn't qualify to operate a dispensary, Hultberg says he still expects a healthy boost to his business once people have the option of consuming marijuana legally.

"What are they going to smoke out of?" he asked, then gestured at the packed shelves of glassware inside Jamaica Junction. "That will help any smoke shop business at all once you make it recreational," he said. 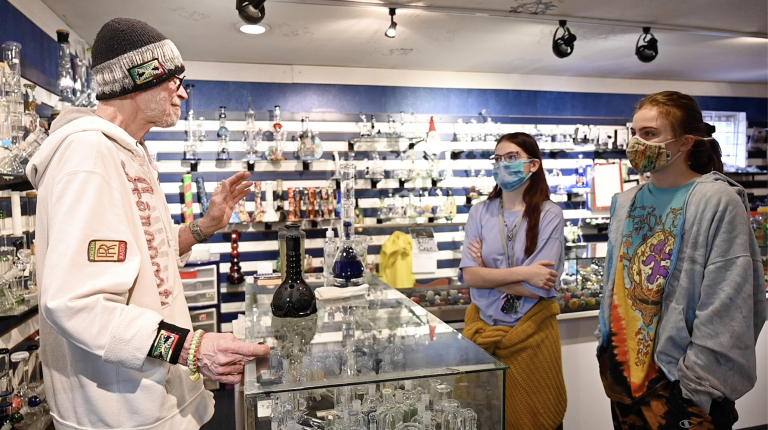