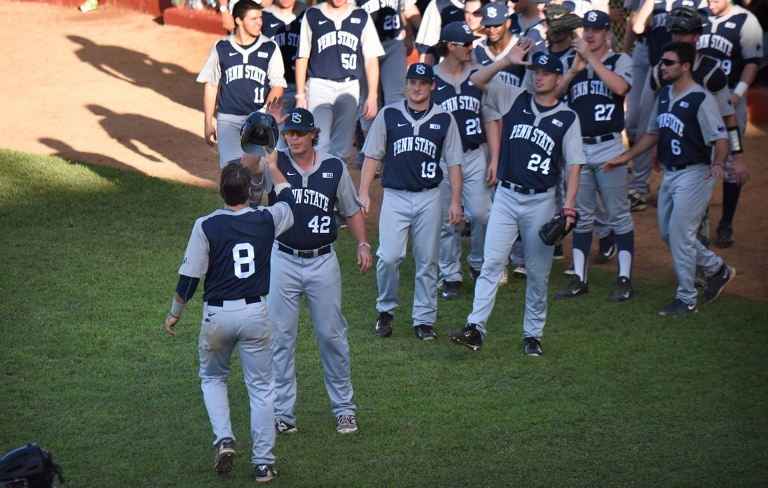 SAN JOSE DE LAS LAJAS, Cuba – Thanks to a seven-run second inning outburst – capped by a Nick Riotto bases-clearing triple – Penn State baseball picked up the best souvenir it could’ve asked for while in Cuba, a 9-3 win over Mayabeque on a gorgeous Friday afternoon at Estadio Nelson Fernandez. 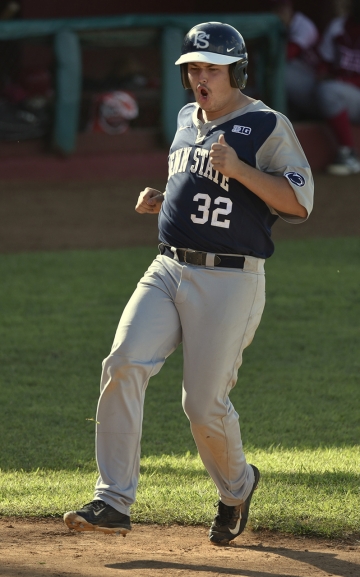 Penn State first baseman Tyler Kendall celebrates on his way to home plate as the Nittany Lions beat the Mayabeque Hurricanes 9-3, with 4 runs coming from bases loaded walks in the second inning. Photo by Kelsie Netzer

The Nittany Lions were winless and had managed to score just one run through 19 innings of play in Cuba, but that all changed in the 20thframe against the Hurricanes.

Riotto, a junior from Washington, Pa., walked to start the inning and Alex Malinsky followed with a bunt down the first base line that Mayabeque starting pitcher Essiel Fuentes bobbled, setting up Penn State with runners on first and second.

Freshman Austin Riggins loaded the bases on a seeing-eye single through first and second, and Keith Leavitt recorded the first RBI of his Penn State baseball career on a walk. Altoona product Christian Helsel then smacked a hard ground ball up the middle to score Malinsky and give the Nittany Lions their first lead in Cuba, 2-1.

A Greg Guers pop out in foul territory to the Hurricanes catcher and another walk, this time to Tyler Kendall, set up Riotto’s second at-bat of the inning. Digging into the left-handed batters box, Riotto ripped the 1-0 pitch past the diving outfielder in right to clear the bases and give Penn State a 7-1 advantage.

“It was big, especially to get a few runs on the board, especially in a bases loaded situation to get multiple runs,” Riotto said. “Getting that lead early was the best thing we could’ve done.”

For the third straight game, Penn State gave up a run in the first inning. Alex Pozo scored on a single by cleanup hitter Yansiel Gonzalez to put the Hurricanes up 1-0. 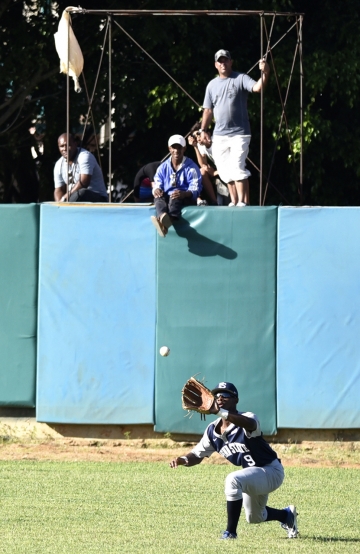 Starting their four-game exhibition tour in Cuba with close losses to Havana’s Industriales and defending national champion Ciego de Ávila, Penn State broke through playing in a country town about 15 miles east of Havana. The pocket-sized ballpark featured an older man selling homemade fried dough from a plastic container, a young fan strolling through the stands carrying a rusty cage with a pet bird inside, a stray dog napping in the glistening sun along the first base side, and even a lone Penn State fan, originally from Pittsburgh, sporting a Ben Roethlisberger jersey.

The Nittany Lions got plenty of help from the Hurricanes pitching staff, which struggled with control all day and issued 12 walks. Mayabeque has been stuck near the bottom of the National Series standings this year with an 11-33 record.

Still, Mayabeque tightened the game with two runs in the bottom half of the sixth, but a majestic home run over the left field wall from Helsel gave the Nittany Lions one back and made it 8-3. The Blue and White would tack on one more via a Kendall hot shot down the right field line to win by six runs.

“It was a pretty cool experience,” Helsel said about the homer. “Guers and I have been joking about it since he’s hit a couple in BP and all the locals loved him and now I’m the new favorite, which is pretty funny.” 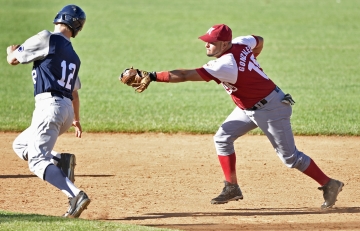 Head coach Rob Cooper spoke with his players down the right field line for about 20 minutes after the win, while a crowd of young Cuban baseball fans waited outside the stadium gate for a chance to meet them.

The win is believed to be the first by a U.S. team playing against a National Series club.

“That’s a special thing,” Cooper said. “It’s something that they'll be able to talk about for the rest of their lives. I was just told that is the first win by an outside team in a series national league ever, so we literally made history.”