An Artist’s Way of Expressing Her Voice

For Penn State senior Margo Yellin, artwork that began as mental health therapy in fifth grade has blossomed into a process for creating projects that reflect feminism and empowerment through a female’s perspective.

Yellin began her artistic journey after she had been diagnosed with a learning disability called auditory processing disorder. She began drawing and painting as a coping mechanism to ease her mind from the challenges she had been facing. Her parents persuaded her to go to an art school and she has been trained in oil paintings for over ten years. She loves using bright bold colors because she likes to portray her unique personality in paintings. Yellin draws nearly every day while she has free-time and makes paintings for her friends and family as practice. 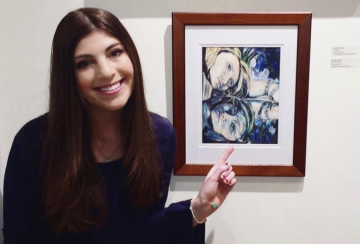 Margo Yellin at the age of 17 with her artwork on display in her high school. Photo courtesy of Margo Yellin.

Yellin described how she had been bullied throughout her childhood due to her speech impediments. Yellin’s biggest motivation was creating beautiful art that reminded herself of her worth and ability to succeed, regardless of who or what tried to bring her down.

“Dealing with all of these obstacles in my life are really what I reflect upon in my drawings and paintings,” Yellin said, “I will never let someone or something stop me from doing what I love because I know my worth and I’ve been given this artistic talent for a reason.”

Yellin puts pride and hard work into every project she’s done. She said how some of her paintings have taken months to complete because of the intricate details that goes into them. She hopes that her artwork will give others who have faced similar struggles a sense of dignity and hope to keep pushing forward.

Within the past few months, Yellin started to focus on feminism and women’s empowerment. As a major in advertising, she applied her artistic talent and reversed the roles in 1950s advertisements where women were sexualized and belittled. 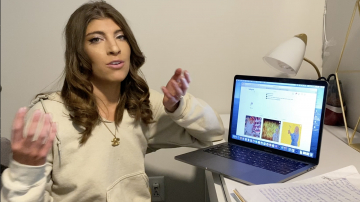 Margo Yellin says she tries to invest an hour a day on her artwork in her apartment. Photo by Camerynlee Orlowski

“I love doing these advertisements because it truly has shown how women’s roles in society have dramatically changed throughout the decades. I love using my projects as a way to voice myself because I believe that all voices matter. It’s also quite interesting how art can be applied to anything and I love that I’m now using art into the advertisements I create for my major,” said Yellin.

One day, Yellin hopes to become a full-time artist with the profits she makes off of her work. For now, she will continue her hobby while focusing on her advertising career. Any profit Yellin makes from her drawings and paintings she donates to a camp called Sunrise. Sunrise is a camp for children with cancer in which Yellin has volunteered at in the past.

Margo Yellin is an inspiration for those who were told they couldn’t be someone they wanted to be. Despite her hardships, she has found a passion and has utilized it to the greatest of her ability. Yellin’s story shows the reason you should never give up on the person you’ve always dreamed of becoming.

Margo Yellin is an inspiration for those who were told they couldn’t be someone they wanted to be. Despite her hardships, she has found a passion and has utilized it to the greatest of her ability. Courtney Redding, an art professor at Penn State World Campus, said “Margo has consistently put her full effort into anything she’s done within my class. I’m so proud to see her artistic progression even just within this year.” Yellin’s story shows the reason you should never give up on the person you’ve always dreamed of becoming.

Video: Bringing out the creative side

Margo Yellin says she's been painting during quarantine and has incorporated elements of graphic design into her work.


Yellin says she developed a passion for art after being diagnosed with auditory processing disorder. Yellin now utilizes her art as a coping mechanism, channeling feminism and mental health into her artwork.

Cameryn Orlowski is a Broadcast Journalism student graduating in May of 2021 from Penn State University. Throughout Orlowski’s college career, she has worked at Buffalo Canvas and Party Host Helpers as a marketing and public relations Intern.

Orlowski is eager to begin her career as she just landed a full-time position as a recruiter with Aerotek in Boston. She is excited to further her knowledge and looks forward to continuously network with others.