Video posted April 25, 2016 in Best of CommMedia by Lesly Salazar.


Matt Prosek was diagnosed with meningitis at only four months old.  His parents never imagined raising a child with disabilities, but he has surprised them with how far he has come.

Matt has been involved with Special Olympics since he was eight years old. Since he can only choose one sport to participate in, he chose an individual sport — tennis. He said  he likes it best because he doesn’t have to worry about finger pointing or team judgment if something goes wrong.  Despite his disability, Matt is very independent and self-confident. In 2010, Matt was inducted into the Hall of Fame, in addition to wining several other awards over the years. He is currently training for the Summer Special Olympic games and looks forward to his 31st year being involved in the games.

Tennis isn’t the only sport Matt is involved in.  He is a part of a bowling league, skies, and plays volleyball and golf.  Among all his siblings and parents, Matt is the athlete of the family.  Matt’s mother, Cathy, said they all want to be on Matt’s team whenever they play games together. 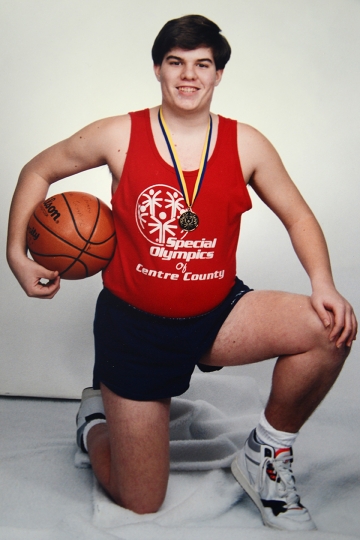 His disability has yet to hold him back from enjoying life to the fullest. When asked to describe himself, Prosek said “Matt Prosek is positive thinking, creative, happy and enjoyable.”

His mother said he was perfectly normal for the first four months of his life.  Matt’s twin was never diagnosed with a disability, and neither were any of his other siblings nor parents.  They all tested positive for the virus, but for an unknown reason, Matt was most susceptible to it.  However, Matt’s aunt, Jeannie, always connected with him because of her disability, club foot. Jeannie was also a twin.  The two of them share a bond that has helped Mat throughout his life.

Cathy used to worry Matt wouldn’t grow up to be self-sufficient.  Their family moved to State College because of her husband’s work, but the move proved to be helpful in more than one way.  State College’s easy public transportation system helped Matt become more independent.

This picture was taken in 1992 when Matt was sixteen years old. He started playing basketball in Fairfax, Virginia when he was eight years old. Source: Prosek family

In his words, “I can hop on a bus and head over to
campus whenever I feel like.”  Matt says he walks
from Park Forest all the way to Old Main and back
every Friday because he enjoys exercising.

He found himself eventually employed by the university, first part-time then full-time.  He said he was very saddened by the Jerry Sandusky scandal, adding all the “politics” of the situation made his job less enjoyable. Now, he works at Giant Food Stores, and he loves it.

Like any other person, Matt Prosek can sometimes get discouraged.  His mother, Cathy Prosek, said that he has always had a sensitive persona. Growing up, Matt had a hard time being confident because of the comments he would hear about his disability or looks.

Although his confidence level is higher than ever before, he still has some bad days here and there. This message is meant for Matt to hear whenever he’s having one of those days.

After I graduate in December 2016, I intend to work as a digital journalist for a television news station. I have interned with FOX 5 D.C. since 2013 where I have conducted interviews, produced weekly segments and produced original content for the website. Visual storytelling has become my forte.

ACC Championship Preview: No. 23 North Carolina vs No. 9 Clemson