DUBLIN – For a while, it looked like the wrong people were walking into a surprise party. Travelers arriving in Dublin on Wednesday morning were surprised to be greeted by balloons and signs and a group of about 50 fans and media. 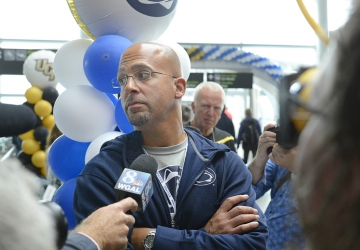 The welcoming party, of course, was for the Penn State football team, which landed at Dublin Airport at about 11:10 a.m. local time, cleared customs in less than 45 minutes and then streamed into the terminal clad in white T-shirts and blue track suits. Each player carried a duffle and a backpack.

When Penn State coach James Franklin arrived, he worked the crowd, telling one Irishman, “You have an awesome accent.”

From one football to another

Croke Park began its transition from a Gaelic football venue to an American football venue on Tuesday. The first several rows of seats are covered – players on the sidelines would block the view – and displayed on the covering on one side (the side visible on television) are ads for Penn State World Campus. As the Nittany Lions were flying into Dublin, workers at Croke Park were installing American football goalposts, which were ready when the team toured the park after landing.

The Croke Park Classic will end around 5 p.m. in Ireland, and fans attending the game may well want to watch other American games that will be kicking off stateside soon after Penn State and Central Florida finish.

But there are not a lot of options, so far.

“Americans will be one of our prime customer groups, so we always try to find those games,” said Oisin Gall, a bartender at Buskers Bar in Dublin’s Temple Bar.

Buskers intended to air whatever American football it could, as did Woolshed Baa and Grill on Parnell Street, Fitzsimons in Temple Bar, and O’Neill’s on Suffolk Street. Other establishments were looking into packaging options for customers.

The weather in Ireland deserves credit for one thing: consistency. Yet again, the forecast calls for wind and rain Wednesday with a high temperature of 61 degrees.

“We’ll have the best practice we’ll ever have today.”


(Melissa Conrad is a student in the John Curley Center for Sports Journalism at Penn State. Fellow student Greg Pickel contributed to this report.)