DUBLIN – Ed Schnure arrived in Dublin on Thursday morning feeling a bit groggy. After sitting in traffic for almost two hours before boarding a six-hour flight, all he wanted to do was rest once the plane touched the tarmac. 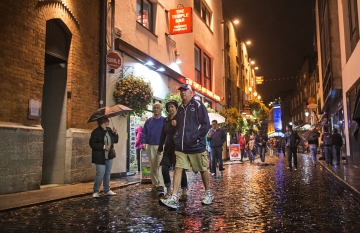 But since the hotel doesn’t allow check-in until noon, he, along with his wife Geri, decided the couch in the lobby was a good place for a snooze.

The lifetime Penn State fan from Laurelton, Pa., needed the rest before taking in the sights and sounds of the city, complete with a trip to Dublin Castle, St. Patrick’s Cathedral, and the historic prison, Kilmainham Gaol.

“It’s possible we could come back,” Schnure said, “but right now, it’s a once in a lifetime trip.”

Officials from the Croke Park Classic hope that desire for Penn State and Central Florida fans to squeeze the most out of their once-in-a-lifetime trips to the Emerald Isle will have a significant economic impact on the host country. The Lions and Knights play Saturday afternoon at the home of Irish sports.

Peter McKenna, director of Croke Park stadium, estimated that over 20,000 overseas visitors are making the trip to Dublin for the game, injecting 30 million Euros into the local economy.

“I think the real figure will be far higher than that,” he said. “The city is going to get really wound up.” 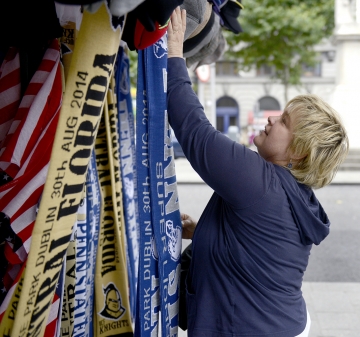 He estimated that tourists will stay an average of three to five days, and spend roughly 300 or 400 Euros each day on room and board and other activities.

“It’s a very easy task to persuade bars and restaurants and various other institutions to welcome the crowd in,” McKenna added. “From our point of view, it’s not a hard sell.”

It’s not for Schnure. Thanks to a unique and fortuitous situation, his company is footing the bill for his trip to Ireland. That means there’s a little more spending room for him and his wife as they celebrate their 25th anniversary.

“They’re paying for almost everything,” he said. “We’d be more thrifty if it weren’t for that.”

Among the areas of the city eager to welcome fans like the Schnures is Temple Bar, a popular Dublin neighborhood that now has restaurants and bars advertised as the “official fan zone” for American travelers.

“It's great for the NFL and U.S. college football to come here,” said Joyce Polan, manager of Woolshed Pub in Dublin. “It's something different. There will be loads of Americans coming and it will be great for the economy.

“We love Americans here,” she added. “They eat tons of chicken wings.”

In 2012, for instance, total tourism revenue for the economy was around 5.9 billion Euros—4 percent of the gross national product. That adds a huge benefit to what has been a struggling economy dating back to the financial crisis that began in 2008.

Gone are the days of the Celtic Tiger revival, which started in 1994 and saw the economy expand at an average yearly rate of 9.4 percent, thanks to foreign investment and low corporate taxation. During that period, the Irish gross national product per capita rose dramatically to surpass all but one state in Western Europe. Unemployment fell from 18 percent in the late 1980s to 4.5 percent by the end of 2007.

Then the failure of numerous banks, requiring billions in government bailouts, plunged Ireland into financial turmoil that is still ongoing.

Events like American college football, which have happened here occasionally since 1988, when Boston College beat Army across town at Lansdowne Road, have helped ease the nation’s suffering. Hundreds of thousands of fans have made the trip to Ireland over the years as a result of the American games.

Aviva Stadium director Martin Murphy said after the 2012 match between Notre Dame and Navy that the event attracted 33,000 Americans and was worth 100 million Euros to the economy.

Leo Varadkar, Ireland's former minister for transport tourism and sport, said the Penn State-UCF game would be “every bit as important.”

In addition to the revenue created by tourists, there is also the opportunity for Ireland to promote itself and its resources to potential tourists. Penn State and Central Florida will be shown on ESPN2 at 8:30 a.m. on Saturday, and although an early-morning kickoff is not prime time back in the United States, there is certainly a large audience hungry for the first weekend of college football.

“It’s going to be on early in the morning, no other games are going to be on, and Dublin is going to be showcased to millions of Americans,” McKenna said. “They’ll say ‘Wow, what a great place. Let’s put that on my bucket list.’”