RIO DE JANEIRO (AP) — At the Riocentro Pavilion 3, the only sound in the table tennis arena was a steady tapping as the two competitors in the gold medal match struggled for points.

On one side of the table was Xue Juan. On the other, Li Qian. Both Chinese Paralympians in wheelchairs. Their match was one of two to decide a gold medal on Monday that featured athletes from China only. 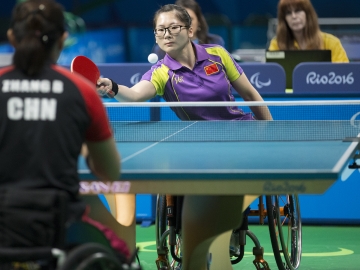 Gu Gaii, of China, returns a shot against teammate Zhang Bian in the gold-medal match in table tennis at the Paralympic Games in Rio de Janeiro. Zhang won 11-6, 11-6, 11-6. Their match was one of two to decide a gold medal on Monday that featured athletes from China only. Photo by ntonella Crescimbeni

After Xue defeated Li, and Zhang Bian beat Gu Gai in the later match, each winner quietly acknowledged the victory, wheeled to the middle of the table and shook the hand of her countrywoman.

There were no screaming fans, and little celebration. But in Rio, the scene has become routine, across the menu of sports. China is dominating the Paralympics.

After competition ended on Tuesday, China held a huge lead at the top of the board with 147 total medals (63 golds) through six days of competition. The next closest country, the United Kingdom, had 75 medals in all.

China has topped the medal board in the last three Summer Paralympics, beginning at the 2004 Athens Games.

This year, China has more than 300 athletes, a physical representation of the country's commitment to keeping its spot as a Paralympic powerhouse, but it can also be seen as a strategy: More athletes competing means more opportunities to collect medals. 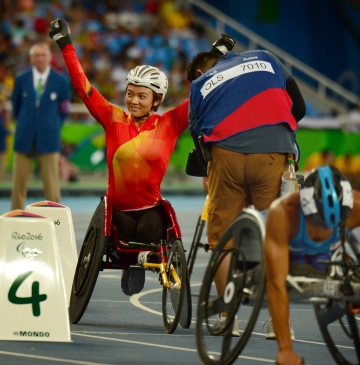 Zou Lihong, of China waves to the Olympic Stadium crowd after her bronze-medal finish in the women's 400 meters at the 2016 Paralympic Games at Olympic Stadium in Rio de Janeiro. Photo by Shannon Ryan

This was evident soon after China stepped foot on Brazilian soil. Last Friday, China won 14 medals in swimming, including two all-China podiums in men's 50- and 100-meter butterfly races. The victories have not stopped.

Some athletes, however, have been raising questions about China's dominance in Rio.

Philip Craven, the International Paralympic Committee president, was asked at a news conference on Monday about complaints that Brazilian competitors had been making about potential cheating by Chinese athletes.

"We had a very informal, short board meeting this morning of the IPC and that issue was brought up to us and it is something that we will look into in the future, not to do necessarily with doping, we always look into that anyway, but with regard to what particularly the Brazilian athletes are thinking and saying," Craven said.

A spokesman for the IPC later said Craven was referring primarily to whether some Chinese athletes had been classified properly. Russia was banned from Rio for systematic doping, raising suspicion about cheating generally.

The Paralympic Games, which date back to an English competition in 1948 and became the Paralympics in 1960, were once an event in which the United States routinely topped the medal count.

The U.S. finished first in medals for nine consecutive Paralympics from 1964 to 1996. China, meanwhile, did not begin sending athletes to the Paralympics until the 1984 Games.

The 2008 Olympic and Paralympic Games were awarded in 2001 to Beijing over four other cities. Three years later, at the 2004 Athens Games, China not only cracked the top five in total medals for the first time but also placed first.

Penny Briscoe, the British chef de mission in Rio, said the value in winning a bid to host the Summer Games cannot be underestimated in relation to the development of sport for the Paralympics.

Briscoe recalled jumping and screaming alone in her house when London was announced as the host city for 2012. Even though the UK was the home of the Paralympic Movement, and had already seen success in the past, winning the bid to host the Summer Games led to an increased focus on the Paralympics.

"It was massive and such a morale boost," Briscoe said in a phone interview. "It gave everyone maybe more sense of purpose than any other four years."

Matt Cramer, director of high performance for United States Paralympics, said the U.S. often has different challenges than some of the other high profile names atop the Paralympic leaderboard.

"One thing is that we are creative but we are also very smart with our resources, because we get no federal funding," Cramer said in a phone interview.

As a result, the American Paralympic program invests in initiatives, both long and short term, that are aimed at identifying and developing the athletes who show potential.

"We gauge success in the most simplistic way — we look at an athlete that is in the system and has shown a positive trajectory that will hopefully lead to medal," Cramer said. "But we don't just hope and cross our fingers, we really invest in them." 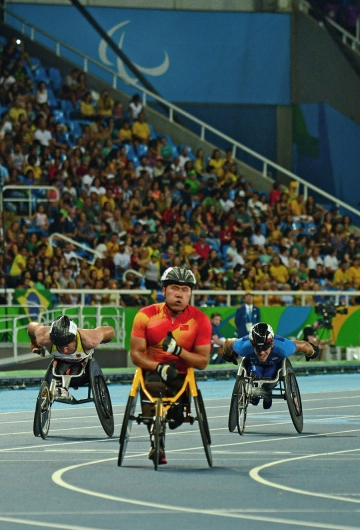 Cui Yanfeng of China reacts after finishing second in his men’s 400m heat to take the eighth and final spot in the event final at the 2016 Paralympic Games at Olympic Stadium in Rio de Janeiro, on Sunday, Sept. 11, 2016. Photo by Shannon Ryan

China, too, has invested in long term plans for success in the Paralympics. In 2007, the huge China Disability Sports Training Centre was opened in Beijing.

Britain also invests a lot in its Paralympic program, though Briscoe said it can be difficult to compare other countries to China because of the sheer size of its disabled population. In 2012, the Beijing Review reported that China's disabled population was about 85 million. According to the United Nations, the entire population of Germany entering 2016 was about 80 million.

Regardless of the number of athletes competing for each nation, it is still up to the individual athlete to win.

In the Olympic Aquatics Stadium on Tuesday, China was at it again.

Yang Bozun and Zhang Xiaotong claimed gold medals and world records in the 100-meter men's and women's breaststroke finals for blind competitors. Neither was the top finisher in qualifiers.

By the end of the night, China had won eight medals and broken five world records.

After her race, Zhang was asked about the secret to China's success at the Paralympic Games.

"It is because we train very hard in China and it is a whole teamwork for the entire China team," Zhang said through a translator.

Whatever it is seems to be paying off.

(Shannon Ryan is a senior majoring in broadcast journalism at Penn State University. Penn State and the University of Georgia partnered with The Associated Press to supplement coverage of the 2016 Paralympics. This story was originally published by the AP in Summer Games 2016.)

The Allegations Against Artemi Panarin

Behind the Dollar: The NFL and NHL Salary Caps Explained