Former Football Player Has No Fear


It seems like for many college students, issues such as depression and anxiety escalate to become very lonely realities. Often, emotional and psychological struggles leave them lost, afraid and unsure what to do next.

While a student at Westminster College, Jordon Rooney found himself isolated in his dorm room. Rooney played football for his school and his entire life. Like most young boys, he dreamed of playing in the National Football League. A full-time college student, Rooney found his childhood dream still alive, but embarrassment kept him from ever sharing his aspirations with anyone. As a result, Rooney played passionately and played hard, but knew his college football uniform would most likely be his last. However, in the game  before the big Homecoming matchup, Rooney suffered a serious blow to the helmet? 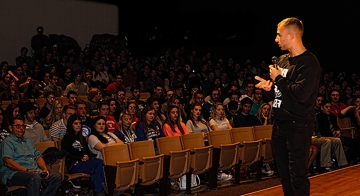 “I felt off from getting hit the week before but it was the Homecoming game, so a big rivalry for us,” Rooney said. "You know, I was talking to this girl so I wanted to play well, obviously. So I played in the game.”

“I was noticing that I wasn’t being really like me. I wasn’t enjoying things I normally enjoyed and doing the things I normally do. I was not this pessimistic person,” he said, “the doctor said, ‘you should have been on bed rest for months, not in school, not doing anything…away from bright lights, nothing’. So the fact that I had been trying to go about life as normal was astounding,” he said.

With patience, Rooney finally felt like his old self again. However, he received a call from home one spring day that he said he would never forget.

“My mom called me and said, she had something important to tell me. Because my family had been working to help me out, she was afraid to tell me, until she finally just said ‘I have cancer,’” Rooney recalled.

Rooney didn’t think he could handle another pain weighing on him. He said that while he knew cancer was a common heartbreak for many people around the world, he felt like his mother’s diagnosis would be the last straw to break his world.

“I kept asking why this was all happening to me. Why me, God, why?” Rooney said.

On that aching day, Rooney said he had a realization like never before. What started as prayers of sorrow turned into positive affirmations. Rooney said he decided then and there to have no fear, embrace the challenge before him and strive for happiness.

“I decided I have to work for my own happiness. I decided I couldn’t let this or anything else I was afraid of stop me from living my life and reaching my dreams,” he said.

It was then in his dorm room that Rooney formulated the idea of his movement Never Fear Being Different (NFBD). Getting together with former teammate David Wright, who spent a season playing with the Tennessee Titans, the duo started sweeping the area with their motivational message. Though the organization originally focused on helping young student athletes, NFBD picked up momentum across many different states. Now, NFBD accepts and welcomes anyone and everyone to face their fears.

“NFBD is a movement, a brand and mentor program that encourages kids to follow their dreams. We want to be that resource, that light, that listens to their goals and what they want to do and give them support and tools to reach them. We want to be that force that tells them that they can do it,” Rooney said.

Photo Gallery: Rooney on the gridiron in Europe

Rachel is a senior at Penn State majoring in Broadcast Journalism and minoring in Theatre with a concentration in Dance. She is excited to be a member of the In The Game team for her final semester. Rachel hopes to pursue sports media and broadcasting after graduation.