Ben Robinson, a junior at Lock Haven University, has a passion for running. Not only does he compete on the Lock Haven cross country and track and field team, but even in his free time, you can usually find him working out-running, biking, or lifting weights.

Robinson has been running since he was very young. Before running, he used to play football, basketball, and baseball but soon realized that those sports weren’t meant for him. When he finally got into running, he realized that he has a true passion for it. “It’s like you feel free, then you feel like all the stresses from the day are just gone,” Robinson said.

In 11th grade, Robinson qualified for the districts meet at Scranton Memorial Stadium in Scranton, Pa. Pressure was high because if Robinson would receive a top place, he could run at the state meet.

During the districts meet, he was running the mile and was in first place coming around the last corner of the race. On the last stretch, Robinson suddenly stopped and collapsed. The whole crowd gasped as they were struck with concern. Robinson had passed out. He eventually got back up and finished the race before collapsing yet again. Unfortunately, he wasn’t able to make the states championship meet due to the incident. 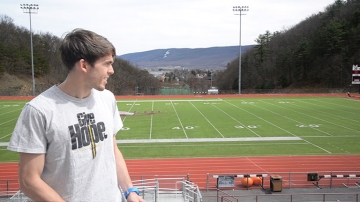 Robinson ponders his thoughts and smiles as he looks over his college track. Photo by Megan Soltis

A week later, Robinson went to get tested to see what was wrong.  The first doctors told him he had a heart problem and needed to get more tests done to find the specific problem. After the next set of tests, the doctors diagnosed Robinson with ‘sport-induced asthma’, which according to mayoclinic.com is a narrowing of the airwaves in the lungs due to exercise. Robinson said it was definitely an eye-opener but he’s glad it happened so he could figure out where his limits start and end.

This incident has not stopped Robinson from doing what he loves. The races he runs for track meets range anywhere from a mile to the 10K. Robinson has even earned a U.S. Track & Field and Cross Country Coaches Association Division II Cross Country All-Academic (USTFCCCA) award this year for having high academics and athletic ability. His cross-country team finished 12th at the NCAA XC Championships.

Robinson’s coach, Aaron Russell, stated that Ben is one of the happiest people he’s ever worked with and is always brightening everyone’s days and making them laugh. Russell said that Ben would get anxiety and had some troubling moments due to asthma when he first joined the team. But after training the right way and getting his confidence back up, Ben has been an amazing addition to the cross country and track program.

Robinson portrays himself as a strong individual and won’t let asthma control his life. Robinson continues to do what he loves to do. His coach and teammates have nothing but nice things to say about him. He tries to push not only himself but also his teammates to do the best that they can. He thanks God every day for letting him do what he loves and hopes to continue running for the rest of his life.

Robinson and the rest of the Lock Haven cross country team won first place at the NCAA Atlantic Regional Cross Country Championships. 2014 was the second year in a row that they won this honor. They then headed to Louisville, Kentucky to compete for the National title. The team came in 12th place with Robinson finishing 115th overall.

I hope to become a producer for a sports or entertainment newscast. My dream is to move to Los Angeles or New York City to pursue this career.

Mike Hull Reflects On His Past While Looking To The Future