Kevin "KG" Gallagher grew up thinking that his life was simple. Born and raised in Broomall, Pa., Gallagher lived with an older brother and parents who were divorced.

KG never let the divorce stop him from keeping his mind occupied.

He attended Marple Newtown high school where he played soccer and basketball.

“No football because I heard it was bad for the knees," KG said.

In his senior year, KG decided to try something new. He took his talents to the theater, starting out as an master of ceremonies for the variety show and doing other comedy skits.

When it came to picking a college, it was the caliber of the program that was most important in his decision. The Philadelphian decided on Penn State because of the great opportunities that the College of Communications had to offer. The biggest opportunity that he received was the chance to work in one of the top facilities for Television and Radio in the country.

"I came up here and the program up here just blew me away." Gallagher said.  "It fit the bill"

To do well as a Communications major, Gallagher says students have to stay involved and to his credit, he keeps busy doing many news and sports activities related to broadcasting.

At PSU, he is the production director at ComRadio, the student-run radio station. At ComRadio he creates commercials and gets a chance to show his personality on air when broadcasting sports on talk shows and at live events.

KG also had the opportunity to be apart of the Centre County report, a class that gives students the chance to be apart of a real live news cast; along with taking many video and radio classes that gave him versatility. 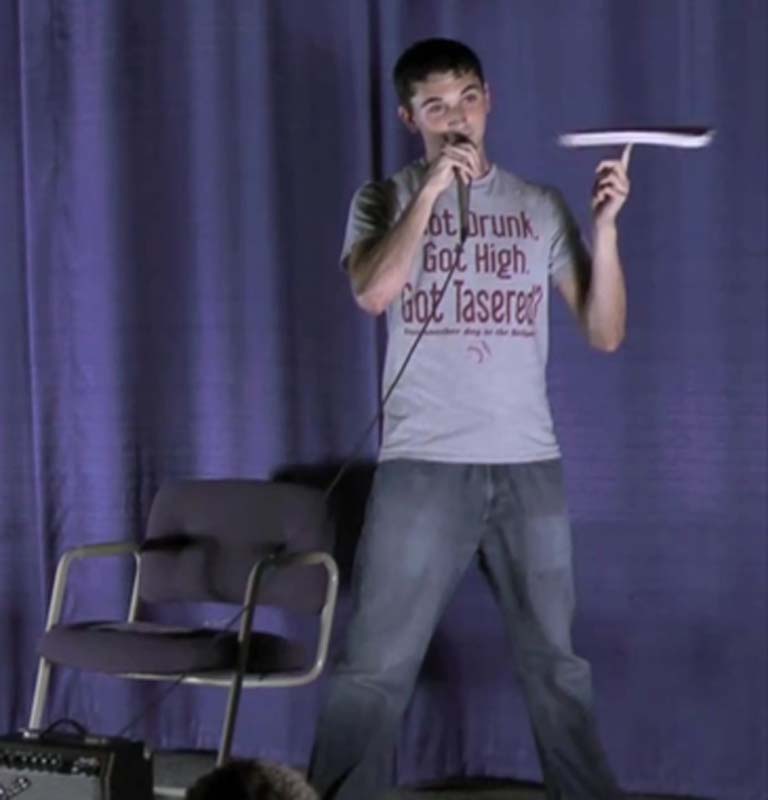 Outside of class, Gallagher found a love for entertainment, humor and craziness. You put it all together and a comedian is what he became.

He joined a club for comedians called "Second Floor Stand Up," and off to the races he went performing at on-campus events. His role model in becoming a comedian was a comic named George Carlin, who started his trait in the late 1950s. Bio

One bit that got him hooked was a ten-minute bit on "Time" in 1978. Gallagher thought he was brilliant by his ability to think outside the box. "Time bit"

From funny to inspirational was his other role model in the form of his older brother. Gallagher feels nothing more than real love for his brother who helps him out in sticky situations.

He compares their relationship to being two soldiers at war; his brother is the guy who gets sent out in the minefield first to see where all the bad spots are so KG would not know. His brother helps him out by telling him to always do the right thing.

Going forward with all the experience he has in his field, comedy and family, Gallagher does not know what he is going to do after he graduates in May. Radio was his top option, but now he is not quite sure if that is the profession that he wants to dedicate himself to every day.

Gallagher does know he will be headed to graduate school new year. He wants to get into the management side of sports or possibly law. Throughout his life, KG has gone through many experiences to prepare him for the future; even in stressful times KG has his comedy to make it through.

Gallagher: Getting past a heckler

Kevin deals with a heckler who made a personal joke about his life.

Matthew is a knowledgeable, comical and charismatic personality who has a love for sports, and experience doing play-by -plays, talk shows, color commentary, board ops, highlight edits, being a host for different shows and reporting stories. His goal is to become the
play-by-play announcer for the Villanova Wildcats basketball team.

Still preaching at 80: A life of love