Zach Jones is from a small town in Pennsylvania. Music always interested him. He played drums in his high school's marching and concert bands. During his freshman year at East Stroudsburg University, he found a true passion in creating musical tracks. After his second year of college he made the decision to leave school and pursue a career in music. 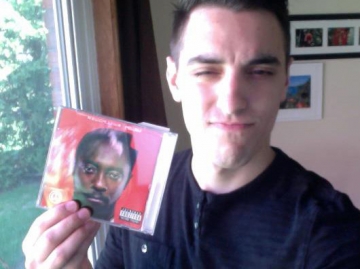 At the young age of 23 he has started working for big name artists. And although it seems to have happened very quickly for him, there were plenty of bumps along the road.

Opportunities came and went, projects fell through and many trips were made from the small town of Whitehall to some big name cities.

However he did catch the eye of yet another artist. Will.I.Am, former member of the Black Eyed Peas and now a solo artist took notice of Jones' talent. After long hours making music via video chats, Jones' earned himself a credit on Will.I.Am's most recent album #willpower.

Jones has one foot in the door and is only just getting started.

When he isn't in the recording studio or sleeping the day away, Jones can usually be found playing live locally. Aside from being talented on the drums, he's also able to play the guitar. He enjoys playing live shows and practicing at home, attempting to re-create songs on his guitar. Here, he plays the guitar solo from Bohemian Rhapsody by Queen.

I was born knowing that I would attend Penn State, no exceptions. My parents are both Penn State alumni, so there was no alternative. I love to talk, which is what led me to pursue a degree in Broadcast Journalism. I’d love to focus in radio, so that I can talk all I want. I always have to know what’s going on with everything and everyone, another reason I pursued journalism. I love to be apart of crazy, hectic environments. I think that comes from having a large family and feeling in my comfort zone in those situations.