Video posted May 8, 2014 in News by Alex Wypijewski


Penn State Student Brian Wengert is a senior majoring in electrical engineering, and enjoys tinkering with different electrical components in his free time.  One of his pasttimes includes building and playing cigar box guitars - something he's been doing ever since his freshman year. 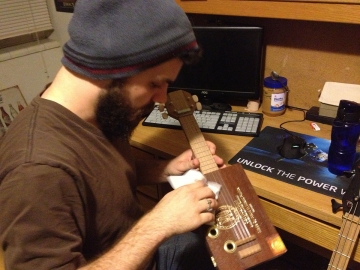 Brian Wengert was turned onto the idea when he purchased a book written by Harrisburg musician Mike Orr about making homemade instruments.  He decided on making guitars out of cigar boxes because he says they look interesting, are cheap, and easy to make (granted you have the know-how!)  When he finds the time, he plays the guitars, although he admits that he plays them poorly.

Wengert is also a bassist in a local band and thought it would be interesting to make his own cigar box bass - an instrument that looks more like a sitar than an actual bass.  His first instrument he made was a cigar box ukulele – a project he finished three years ago.   He says that he is shocked to think that it has been three years already.

He says that one day he may consider selling his guitars, but still needs to find the time and the right market.

An avid lover of reporting, history, and the arts, Alex Wypijewski is a senior majoring in Broadcast Journalism and minoring in Recreation, Parks, and Tourism Management.  He is also very interested in travel journalism and hopes to one day report on experiences found in different parts of the world.  As a native of the famous historic town of Gettysburg, Pennsylvania, Alex is also interested in reporting on stories with a historic spin to them

A person and their (punk) music