A Manheim mega church has 15,000 members. A storefront congregation in Philipsburg numbers 60. Despite the difference in scale, they have a lot in common.


More than 6.5 million Pennsylvanians call themselves Christians. Their churches come in all sizes.

That contrast is obvious when comparing a typical Sunday at The Well – a Wesleyan storefront church in Philipsburg – with a Sunday at Lives Changed By Christ (LCBC) – a non-denominational church in Manheim large enough to have a church-owned mall in the main building.

“In some ways, there’s not a lot of differences between a small church and a large church,” said David Ashcraft, senior pastor of LCBC. “It still comes down to relationships; everybody wants relationships.”

LCBC began in 1986 when a family wanted to bring friends into their home to pray for their son who had been diagnosed with a brain tumor. Those 30 to 40 people eventually began a small church that grew to 150. Ashcraft became their pastor in 1991, and it has been growing ever since. LCBC now has more than 14,000 people who either come to one of their four weekend gatherings in Manheim or attend one of their five other campuses across Central Pennsylvania. And they’re not done growing yet.

“There are three or four churches in the United States that are in the 35,000 to 40,000 range,” Ashcraft said. “That has kind of raised the ceiling for everybody.” 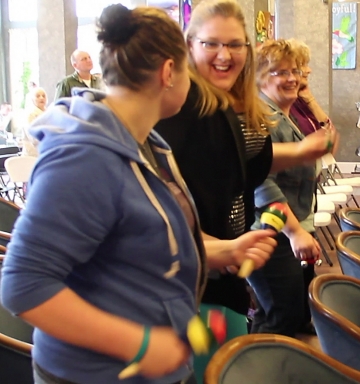 Doug and Karen Rhone, co-pastors of The Well, started their church above a coffee shop in 2010 because they felt there were a lot of people in the community who weren’t being reached. The Well began with 11 people and has since grown to 60. When the coffee shop closed, the congregation moved into the main space on the first floor.

A recent growth spurt at The Well has the church again looking for a more spacious location. When the congregation stops growing, “then we’ve stopped doing what God wants us to do,” Karen said.

The pastors at The Well said it’s hard to imagine what it would be like to preach to 14,000 people, though they’d be ecstatic if their storefront church eventually grew to be that big.

Karen said large churches offer advantages, but she would be concerned about the possibility of losing the close interaction with the congregation.

“I think what would be difficult for me is the lack of relationships with our congregation,” she said. “To stand up and preach to people that you have no idea what their circumstances are, or where they are in life, or what’s going on. You don’t really know the flock that you’re leading.”

At LCBC, Ashcraft said that it is possible for his members to feel unconnected, but he does try to create an environment that promotes relationships.

He said he does that by developing smaller groups led by staff and volunteers, in which LCBC followers can get to know each other on a more intimate level. 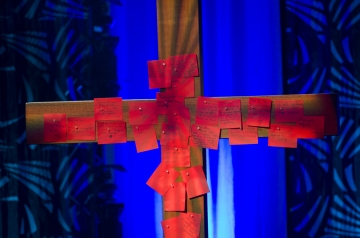 Despite their size difference, the core beliefs of both churches are quite similar, and they are both committed to reaching the largest audience they can.

“What we try real hard [to do] is to take away the barriers for somebody who hasn’t been in church,” Ashcraft said. “We would definitely say that everyone is welcomed.”

“A lot of people in our congregation are people that have attended church, but maybe have gotten hurt by that, and haven’t felt accepted,” Karen said.

The Rhones said some of their members have been turned away from more traditional services because they don’t fit into the church’s accepted group of people.

Both churches are succeeding in attracting new members, but the sheer scale of LCBC creates a different environment than the simple storefront of The Well.

LCBC now has more than 100 employees who do everything from traffic control to running their church-owned coffee shop and bookstore.

The Well, on the other hand, has no paid employees. Neither Doug nor Karen takes a salary from the church. Doug works full-time outside The Well to support the couple. Karen takes the lead at preaching, but Doug helps with that, too. Both of them do everything from greeting newcomers to helping out as janitors. They also rely on volunteers to lend a helping hand.

On Sunday both LCBC and The Well will open their doors to celebrate the Lord. Even though LCBC has a coffee shop that rivals Starbucks, and members of The Well meet in a former coffee shop, both churches share the same goal – spreading the gospel to the communities around them.

The main worship auditorium at the Lives Changed By Christ church in Manheim seats 2,000. There are four gatherings each weekend.

The Well has expanded from a room over a coffee shop into the entire space once occupied by the coffee shop in Philipsburg. The congregation has grown fivefold in three years. Sixty people attend a typical Sunday worship service.

Jennifer Swales is a senior at Penn State University in both the College of Communications and the College of Liberal Arts pursuing dual degrees in print journalism and English. She is a member of Kappa Tau Alpha (journalism and mass communication) and Alpha Sigma Lambda national honor societies.  She recently traveled to Rio de Janeiro, Brazil, to participate in an international reporting class in collaboration with the McClatchy news service. The story produced was published in McClatchy newspapers across the country. She has also been a freelance writer for the Centre Daily Times newspaper and is currently a science writing intern with Penn State. Upon completion of her degrees, she would like to pursue a career as a newspaper or magazine journalist and would like to spend some time as a foreign correspondent.

Bullying can take many different forms