Happy Valley Home Cooking’s very own Laura Armitage says she has been cooking a variety of meals since she was 12-years-old when her mother went back to work. Instead of it becoming a burden, the Latrobe, Pennsylvania native turned her chores into a lifelong career. 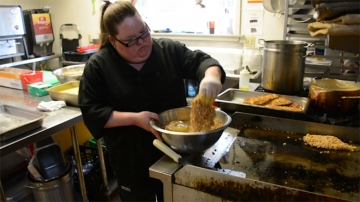 “It’s been awesome, the guys treat me great and I think we have a very good rapport,” said Armitage about the frat house, where she spends roughly eight hours a day.

However, according to the chef, life wasn’t always so cookie cutter.

“In this business, you work a lot of hours and a lot of late nights,” explained Armitage on why she decided to move to State College and work at a fraternity, “I had pretty much no weekends off which equaled no fun.”

So, after she "peaked" in her career as an executive chef, Armitage said that she decided to take a break from the intensity of the restaurant business and instead took on a more party-friendly atmosphere

Now, the only weekdays the fraternity chef gets off are when the brothers leave the kitchen in such terrible shape that it's impossible to prepare lunch in. While it doesn’t happen often, the laid-back Armitage explained that it isn’t her call on if the kitchen is too messy, but rather her bosses at Happy Valley Home Cooking, which is the organization that assigned her to the fraternity.

Armitage shared that her favorite dish to prepare are wings because the fraternity brothers love them so much and the more they eat, the happier she is.

On the weekends, Armitage said people can find her at a variety of local pubs in the State College area, or back in her homeland of Pittsburgh supporting the Pittsburgh Penguins and Pirates.

As far as returning back to the restaurant business, the seasoned chef said that it’s “up in the air, and that she definitely misses the rush of being in charge of a kitchen that she doesn’t ride solo in.

Mayer currently serves as the music coordinator for Penn State Hockey, Football, Basketball, Field Hockey and Baseball, while also hosting a nightly radio show called the Keystone Sports Beat with Penn State play-by-play announcer, Brian Tripp. In the field of radio, Mayer served as a morning show intern for B94.5, eventually moving up to the role of night-show host in addition to hosting the Eagle 98.7 (currently 98.7 THE FREQ) Morning Drive. In the summer of 2015, Mayer worked as a production intern for the New York Mets and the ESPY awards respectively. Upon graduation, Mayer plans to serve as a music coordinator for the Mets at Citi Field.

What keeps YOU up at night?