Tea is to East what Coffee is to West. Penn State houses a Tea Institute in the Ritenour Building. Its members hope to introduce people to tea’s traditional eastern cultures by regularly performing the tea ceremonies.

Zongjun Li, majoring in Geospatial Intelligence, is the Executive Director of the Tea Institute. Tea has become part of his academic life. Li has done research with Penn State’s Institute of Cyber Science under Professor Guido Cervone. There he has created a model that uses satellite imaging to study the distributive pattern of tea plantation in Taiwan and how it co-relates with  urbanization. He is wanting to show how the expansion of cities is going to impact the export and import of tea.

“I was born in Southern China, which is considered to be the capital of tea,” Li said. “But It was not until I joined the Institute, did I start to study and look back into my own culture in the constructive way.”

“Have you ever tried to open a Lipton tea bag? It pretty much tea dust,” he said. Li says that through research, he has found the tea in everyday tea bags “is the end product from the fine processed tea.” 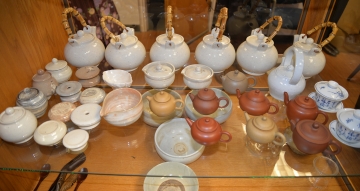 Walking into the Tea Institute, a sense of tranquillity sets in. Magical aromas of various teas, and the unique traditional tea wares all the way from Asia makes it feel like a different world.

The Tea Institute is also a research association that studies the science behind the teas from China, Japan and Korea. Li says that China and Japan emphasize the tradition of sitting on knees throughout the ceremony. He says this position is very painful, because it puts pressure on the leg muscles. This way of sitting helps both the host and the guest to stay focused and appreciate tea ceremony as a divine ritual.

Li sets up the room for the ceremony with dry maple leaves on the table and light green mats. He said that this setup was all in sync with the season the ceremony was being held in.

This was followed by Li, the host ,and a guest taking their sitting positions on the floor at a low table, facing each other. Sitting on floor comes from ancient Chinese cultures. The table is so low that it almost touches the ground and one feels the connection to mother earth.

Tea wares are important in tea ceremonies. “The Magic Teapot’, is a Chinese teapot that has white dots onto its surface, is made of Asian clay and processed by double firing method. According to Li, it got its name because it has the power to “make bad tea taste good by absorbing all the bitterness and unpleasant flavours.”

The Japanese tea ceremony uses a cast iron Japanese kettle. “It produces a ghost sweetness in the tea brewing in it by ionizing the water molecules,” Li said.  The Japanese tea bowls are made out of French river clay and though they look unfinished, this raw and uneven construction is important. The use of these bowls signifies “a pursuit of appreciation of imperfection” says Li.

In China, Japan and Korea, tea is not a casual affair. It is a long, tedious process, which ensures that the host presents the best cup of tea to his or her guest,  Li says.

If a student is feeling very stressed in a midterm or a final exam, feel free to have a cup of tea”, he suggests. “That’s definitely going to help.”

Video: When Tea Brings The World Together 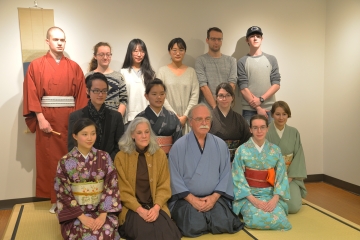 A Japanese Tea ceremony performed at The Tea Institute with the participants wearing kimonos. The participants wear the traditional attire to let the audience experience the ancient culture and make a successful cultural exchange. Photo by Mrisha Sharma


John Miraszek is a team member of the Tea Institute. “I fell in love with the diverse culture,” said Miraszek.

Miraszek joined the institute in Spring 2015. “There is a high level of finesse and deliciousness in everything we do here,” he said.

Miraszek is a junior biology major. In his spare time he has been training in Chinese, Japanese and Korean tea ceremonies since past one year.

He says he enjoys the fact that the institute brings in something “lesser known to Western world.”

Mrisha Sharma is an International Student from India.  She has worked as a writing intern with World In Conversation Student Diplomacy Center at Penn State. She aspires to become a multimedia journalist as well as a producer for movies someday. She enjoys historic places and learning about new cultures. Traveling is her passion. Her dream job would include lots of traveling while exploring cultures around the world.