Losing a leg, gaining a life

Camdin Crouse calls losing his leg in an ATV accident one of the best things that's ever happened to him.

On May 3, 2012, Camdin Crouse was on a recruiting trip for Robert Morris University in his native home in central Pennsylvania.  He had gone on an ATV fishing trip with his friend Jimmy Brooks when a rainstorm hit.  On their way home, Camdin encountered a fallen tree and tried to swerve to miss it.  The slick conditions caused his ATV to hydroplane, leaving Camdin pinned between his vehicle and a tree.  Camdin's friend Jimmy Brooks was able to make a tourniquet, a feat that Camdin credits with saving his life.

The former Robert Morris quarterback was working as a quarterbacks coach while he was attaining his masters at his Alma Mater.  After his accident, Camdin originally became a below-knee amputee, but then went into septic shock a few days after his accident.  70 lbs lighter and 16 surgeries later, Camdin was alive and was an above-knee amputee.

All of Camdin's 70 lbs were lost in 30 days in the hospital, taking him down from 210 lbs to 140 lbs, the lightest Camdin had been since 7th grade.  Camdin says, in all respect, he looked like a cancer patient and had no strength.

2012 would be the first year Camdin wouldn't be around football since he started playing as a little kid.  This, mixed with depression proved to be a nearly lethal weapon as Camdin became addicted to pain medication and, as Camdin puts it, became a "borderline alcoholic."

Selflessly, Camdin says he decided he survived this for some reason and needed to start giving back.  Camdin started traveling the world as an inspirational speaker to raise money for his $60,000 prosthetic leg and to raise money for a non-profit that he's starting in his name to raise money for future amputees that are not covered by Pennsylvania insurance and healthcare.

In December, Camdin came in contact with Teri Jordan, the Ability Atheltics Director at Penn State.  She introduced Camdin to shotput, javelin, discus, bench press and power lifting.  All of a sudden, Camdin says, he got clean and found his new passion in life. 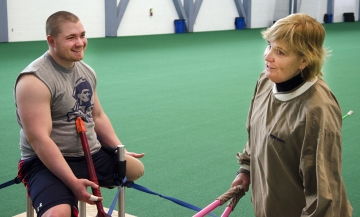 Camdin has matched Paralymic qualifying distances in each of his events, has won first place in all of his events in April and has qualified for nationals in San Antonio in June 2012.  When he's not qualifying for the national paralympic team, Camdin tries to play wheelchair basketball every Wednesday with Teri Jordan and all who are able and disabled in the White Building on Penn State's Campus.

Camdin also helps Teri Jordan every day at the McCoy Natatorium to teach mentally challenged girls how to swim.  "It's the greatest feeling to start off your day by helping somebody," Camdin says.  "How can you feel bad after that?  There's just no way you can have a bad day after that," Camdin says.  Camdin says swimming also helps him work out muscles he hasn't used since losing his leg. 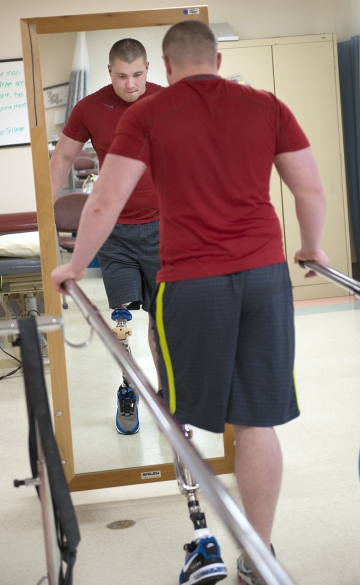 "There really is no negative about getting a prosthetic leg right now, other than maybe a little bit of pain, but I'm in pain every day and I'm going to fight through it."

After 10 and a half months of waiting, Camdin finally got his prosthetic leg fitted for the first time on Wednesday, March 27, 2012.  With his mother Wendy, his father Chris, his girlfriend Annie, her daughter Raylee and his friend Jimmy watching, Camdin walked between two double-bars back and fourth for an hour as Camdin relearned how to walk on two legs.  With the help of Dr. John Laslo of Susquehanna Valley Prosthetics and Orthopedics, Inc. tweaking and readjusting the leg, Camdin fought through visable pain and said he was eager to start walking.

"Losing my leg not only affected me but it affected my family.  They all want to see me walk, they had such relief out of it as well," Camdin says.  Camdin explains that his positivity stems from his family, as they have pushed him constantly throughout the recovery process to keep walking and to get him back on two legs.

While most might consider an accident resulting in an amputation a life-altering experience for the worst, Camdin Crouse considers himself blessed by all the people that have helped him throughout the recovery process and says he feels like he has a lot of giving back to do.

Camdin left Susquehanna Valley Prosthetics and Orthopedics, Inc. that Wednesday to go play wheelchair basketball.  With a handicapped sticker dangling from his rearview mirror, Camdin pulled into a regular parking spot next to a handicapped spot in the HUB parking deck next to the White Building.

Camdin's friend Jimmy Brooks jokingly asked, "Why didn't you park over there and leave this spot for us able-bodied folk?"

"I'll leave the handicapped space for someone who's actually handicapped," Camdin said.

How old are you?