Maxwell Massey arrived at Penn State with one goal in mind: MAKE MONEY. He began his journey through the Happy Valley as a history major with a minor in business.

Massey originally intended to pursue a career in business, however, following his sophomore year he interned with Morgan Stanley and “absolutely hated it.”

Massey decided to pursue a career in sports journalism his junior year, adding a broadcast journalism major to his history major and business minor.

“Growing up as a kid in the Philadelphia area I was raised to live and breathe sports,” Massey said. “I have loved sports my whole life and I knew I had to do something pertaining to sports.”

Massey added academic responsibilities in addition to Massey being a member of the Penn State Crew, making for a  busy lifestyle.

“I have definitely had to sacrifice my social life a little bit,” Massey said. “Freshman and sophomore year I used to be able to go out pretty frequently but now…let’s just say I have not been to the bars too much, but I think it will really be worth it in the long run.”

Before his senior year Massey interned with CBS, affirming his decision to major in broadcast journalism.

“I just absolutely loved it,” Massey said. “It is so hands on and I was really just fascinated at the fact that my work was reaching people.” 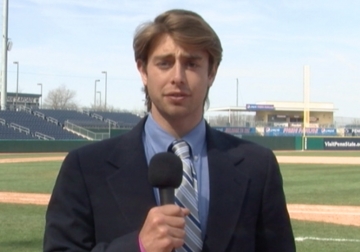 When Massey arrived back on campus in the fall he joined Penn State Network TV (PSNtv) and The Lion 90.7 fm. It was at The Lion where Massey discovered radio to be his favorite medium for broadcasting sports journalism. Massey hosts a show, The SportsBlitz, twice a week.

How Massey balances all of his classes and commitments may be hard to imaginw. Crew forces Massey to wake up at 4:30 am, which he believes is crucial to his motivation and success. After practice Massey attends his classes for the day, heads home for a quick meal and then either hosts a radio show for The Lion or films a package for PSNtv.

Due to the addition of a broadcast journalism degree, Massey will not graduate until the fall of 2014.

“Hey you could have as much money as you want,” Massey said. “If you’re doing something you hate you will never be happy. I have to try to pursue my passion.”

Massey says he enjoys the fact that PSN TV lets him get hands on experience in a professional setting before he enters the working world.

Ever since I realized a 20 inch vertical was not going to get me
to the NBA, I have dreamt of a career in the field of sports journalism. Growing
up in the Philadelphia area I spent my entire childhood glued to the couch
watching ESPN and even shedding tears over Eagles losses until I was about 15 years
old. My devotion to sports is unmatched. Pair that with my passion
for writing and public speaking it’s no wonder I chose to major in Broadcast
journalism at Penn State to pursue my dreams. I am a young man with an intense
passion for my field, and more importantly a desire to learn and gain fruitful
experience.