Victoria Cazanas likes to be nice. This quality makes her a perfect fit to be the Vice President of the Penn State Clown Nose Club, a student organization that promotes taking "positive social risks." Cazanas first heard about the club during her freshman orientation and was intrigued by the club's name.

The Penn State Clown Nose Club was started by Chad Littlefield. Cazanas said Littlefield received a clown nose at an event. As he was walking home, he decided to wear the nose. Strangers on the street smiled at him.

Littlefield later developed an entire student club aimed at making positivity its number one priority. The Clown Nose Club hosts monthly meetings, or “nose days” in which they discuss new ideas for positive social risks as well ask connect with each other through personal discussions.

The club promotes positive social risks. These include everything from screaming complements to strangers walking down the street to participating in “Umbrella Taxis.” If it is a rainy day on campus, members of the Clown Nose Club carry around yellow umbrellas and shelter students, keeping them dry as they walk to their next class, creating an Umbrella Taxi. 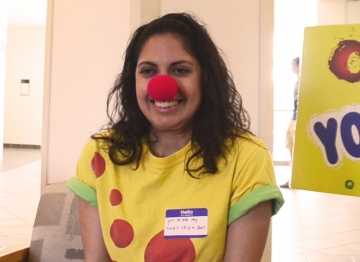 Cazanas says the club has helped to give her a sense of perspective. When she was feeling down one semester after failing nearly all of her classes, the group gave her a support system that helped to shape her into the strong, positive person she is today. Outside of Clown Nose Club, Cazanas hosts a morning radio show, is involved with global programs at the university and speaks Greek, Spanish and English.

The Umbrella Taxi is one positive social risk that the club takes during rainy days on campus.

Tygh Kane is a senior at The Pennsylvania State University where he majors in Broadcast Journalism with a minor in African Studies. Tygh aspires to land a career within the entertainment industry. Outside of journalism, Tygh enjoys creative writing and comedy writing.