STATE COLLEGE, PA — Austin Miller used to be a like any other college student – going to classes, partying, and hanging out with friends in his free time. But on March 29, 2014 his life was forever changed when he took a trip to Bounce Fun Plex in Selinsgrove, Pa.

The then 20-year-old was going for a double back flip on the trampoline, a trick he had done a hundred times, when he suddenly came down on his neck. Pain shot down his arms and then – his legs went numb. 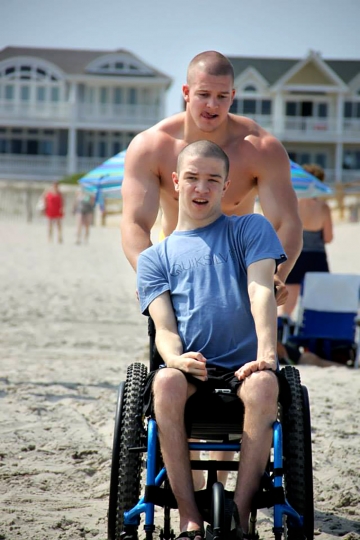 Austin's older brother, Jordan, pushes him during Austin's first trip to the beach in Ocean City, Nj. this past summer. Photo courtesy of Austin Miller

The sounds of sirens rang in his ears as the ambulance pulled up and lifted him onto a stretcher and transported him to Geisinger Medical Center. Miller spent three weeks in the ICU and had several different operations including an eight-hour spinal fusion, a pressure sore surgery, which resulted as a complication from being unable to move, and a flap surgery. He was initially placed on a feeding tube, but later needed a tracheotomy ventilator after his lung collapsed when he came down with pneumonia in the hospital.

“Talking was really difficult at first because I didn’t have the lung capacity. Where I hurt myself limited the use of my diaphragm,” he said in his soft-spoken tone.

In fact, it was about a month and a half after the accident before the Penn State student from Lancaster, Pa. was taken off the ventilator and could speak again.

During the time that Miller remained in ICU care, his parents Mark and Cheryl never left his side. The two were devastated by the tragic accident that would leave their younger son in a wheelchair for the rest of his life.

Miller was then transferred to the Magee Rehabilitation Hospital in Philadelphia where he was classified as an incomplete C-6 quadriplegic with some sensation in his arms and limited use of his hands.

At Magee, he worked diligently to get back the basic motor functions that his injury would permit. He spent four months at Magee for inpatient rehab and five months of outpatient rehab at Hershey Medical Center, working six hours a day for three days a week. 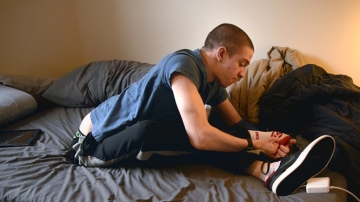 Daily tasks like putting on socks and shoes have become more difficult and time-consuming for Miller. Photo by Kyle Rosenthal

Miller knew that his life would never return to the way it was, but he says he refused to give up hope throughout the frustrating and time-consuming rehabilitation process.

He remained positive by focusing on his goals – returning to Penn State to finish his dual degrees in Agribusiness Management and Spanish and once again living the life of a college student.

Miller’s parents used the time that he spent in the hospital to remodel their home, so that it would be suitable for their son’s return. On top of Mark’s 50-hour workweek as the General Manager of the local Giant grocery store, he took the time to reconstruct the home to fit the standards of the Americans with Disabilities Act. The renovations included a ramp into the house, remodeling of the basement, which was made into Austin's new bedroom, a stair lift to go up and down from the basement and ground floor, and a roll in shower.

In order to pay for the cumbersome medical and construction expenses, which were not entirely covered by insurance, Mark and Cheryl created a YouCaring page. Friends and family all pitched in to raise $10,785 for the Millers. One wheelchair was even paid for by the Adam Taliaferro Foundation. Adam Taliaferro, a former Penn State football player who also suffered a spinal cord injury (but fully recovered), heard of Miller’s situation and donated money for the chair.

A year and a half after his injury, Miller was ready to go back to Penn State and reclaim his freedom.

“I grew to become very independent... When I was at home I didn’t feel like I was the same person,” Miller said. “I don’t like having rely on parents or other people for everything – I’d rather do as much as I can on my own.”

The 21-year-old has now accomplished his goal and currently lives off campus in Blue Course Commons. He is easing himself back into his studies after taking a year off, and is enrolled in a 12-credit schedule. Had the accident never occurred, Miller would be celebrating his senior year. However, he is now technically a second-semester sophomore and will have to stay for additional time.

Today Miller has his eyes on a new goal: conquering the road test and getting back his driver's license. Over winter break, he plans on doing 10 hours of training that will allow him to be eligible for the test. The road test will determine what special modifications he will need in the car he buys. The test car uses hand controls and takes into account factors including strength, dexterity, and the ability to transfer in and out of the car.

The determined quadriplegic who battled his way through adversity plans on buying a Honda Element with special access doors to make transferring in and out of the car easier.

Not Your Average Roommates

Austin Miller and his roommate Brett Gravatt, a former Penn State soccer player and paraplegic, recount a funny story about Miller unsuccessfully searching for food in the kitchen.

Kyle Rosenthal is a senior at The Pennsylvania State University. He is majoring in broadcast journalism and is minoring in French. The Long Island native has achieved Dean’s List recognition for all six semesters that he has been at Penn State. He is also the Promotions Manager of The Daily Collegian and President of the Collegian Street Team organization. Kyle has been a competitive member of the Club Gymnastics team since freshman year, and was the team’s fundraising chair during his junior year.