Alayna Craig-Lucas said she has always had a strong passion for helping others, while she has also always excelled in science. Once she began attending college at Penn State University she realized she could combine her two passions through research. 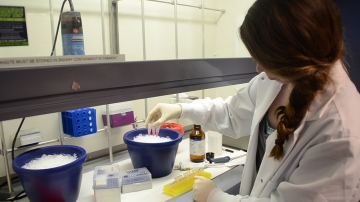 Alayna Craig-Lucas looks at an mRNA separation after completing an experiment in the lab.

Now as a senior Toxicology major, she has spent the last three years working in Dr. Adam Glick’s Lab in the Department of Veterinary and Biomedical Sciences working under Dr. Nick Blazanin. Craig-Lucas works as an Undergraduate Research Assistant in the lab and has been working alongside Blazanin to find protein pathways in the hopes of being able to treat and, one day, cure skin cancer. They currently use an animal model, which Craig-Lucas said can be controversial for some, to test the pathways, and hope to be able to use the same experiments for other types of cancers as well.

Craig-Lucas took these models one step farther for her own Schreyer Honors Thesis, and worked with human cells to see if the proteins they are targeting translate to humans. She completed her thesis, and found that her models did translate to the human cells, so her work was successful.

Now that she completed her undergraduate work, Craig-Lucas will move to Bethesda, Md. to work at the National Institute of Health to continue her cancer research. After two years at the NIH she hopes to move on to medical school and become a doctor.

Craig-Lucas said she has always been passionate about philanthropic work, but until college she didn't have the opportunity to also use that in a scientific way. According to Craig-Lucas, once she began her work in Dr. Glick's lab she was able to finally find a happy medium between helping others and pursuing her dream of being in the medical field.

In high school, Craig-Lucas started Relay for Life and quickly became a part of Penn State's Dance Marathon, or THON, once she became a student at Penn State. Craig-Lucas said that being a part of THON helped her through her transition into college, and once she was able to make a connection with science she felt she was doing the right thing.

Kristina is currently a senior from Westminster, Md. majoring in Broadcast Journalism with minors in Deafness and Hearing Studies and Theatre. Kristina hopes to pursue a career in television news after her graduation in May 2015.

Fighting For Her Life; Woman Must Shed Over One Hundred Pounds