Many Penn State students have siblings attending the University. Introduction to Photojournalism students were assigned to photograph and interview Penn Staters who had a brother or sister on campus. 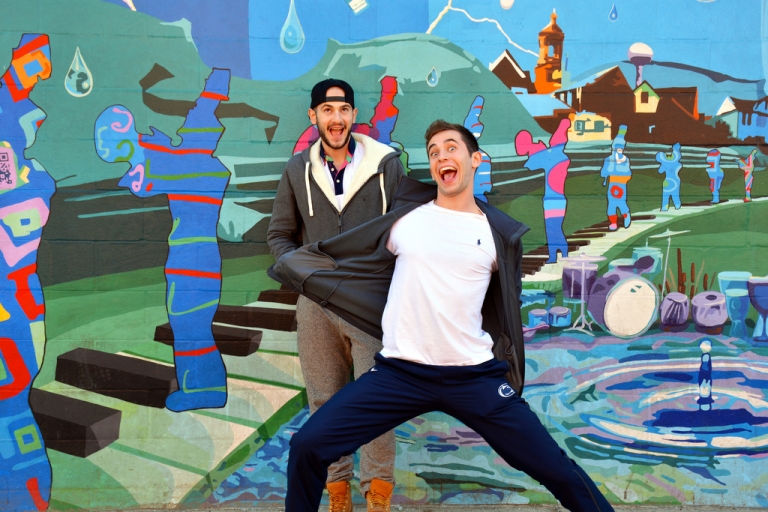 Hasan Dajani, left, stands behind his brother Farouq, in front of the mural on the wall of the Student Book Store on College Ave. in State College. Hasan, a senior majoring in environmental systems engineering, and Farouq, a sophomore majoring in industrial engineering, are international students from Abu Dhabi, UAE. / Photo by Aya Al Khatib 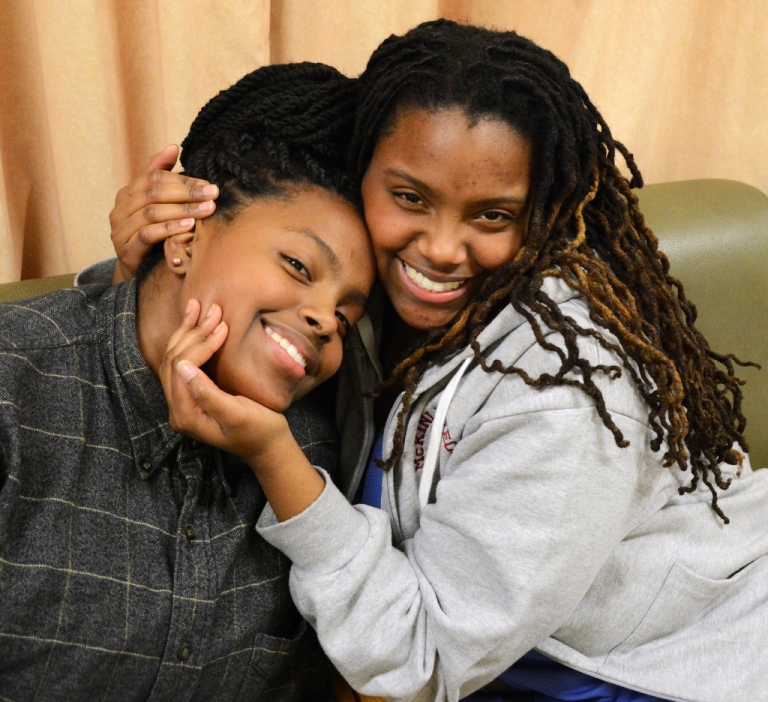 Deme Wharton, left, and her identical twin, Desne are freshman from Washington D.C. Deme is majoring in biology, while Desne is majoring in technical theatre. They aren't roommates but they do live in the same hall. / Photo by Anthony Amato 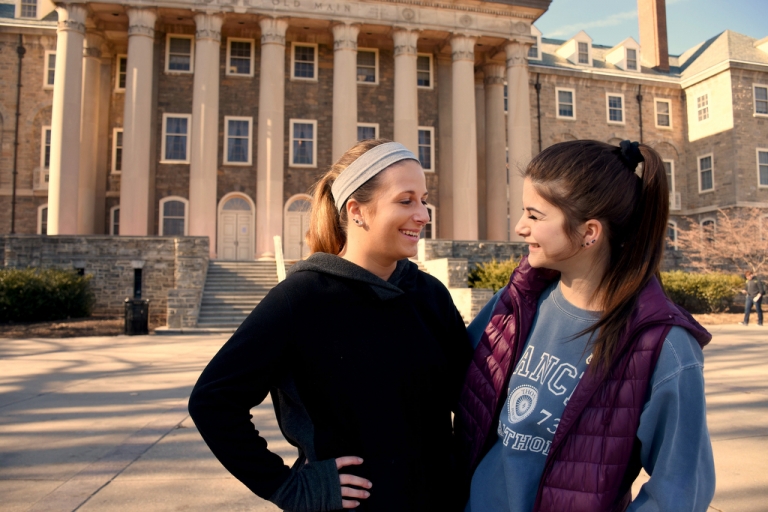 Siblings Kate Grubb, left, and Hannah Grubb, pose in from of Old Main. Kate, a senior majoring in veterinary sciences, and Hannah, a sophomore majoring in supply chain management, discuss their relationship as sisters at Penn State. The sisters try to spend time together a few times a month, but both have found their own niches to thrive in. When Hannah was a freshman, Kate mentored Hannah through finding her footing at the university. / Photo by Rachel Johannes 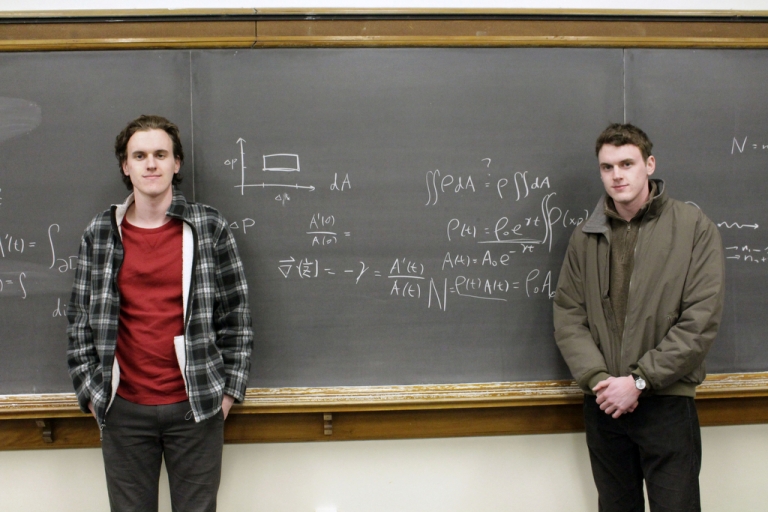 Thomas Lynen, left, and his identical twin Michael, are sophomores majoring in mechanical engineering. The brothers are posing in front of calculations in the Osmond Laboratory where they have classes. / Photo by Matt Katz 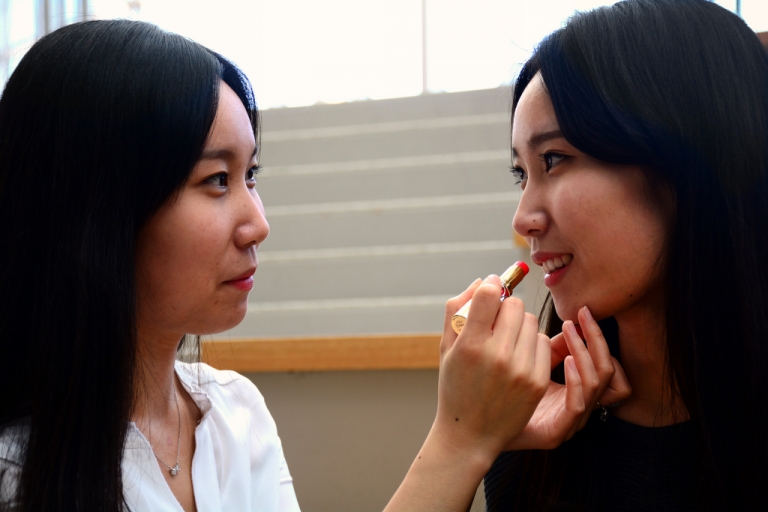 Deye Yang, left, a senior majoring in actuarial science at Penn State, puts lipstick on her twin sister, Deyu Yang, a senior majoring in chemical engineering. The siblings from China said the experience of studying abroad has helped them both grow into strong and independent women. They said they treat their relationship now more like brotherhood. / Photo by Finn Li 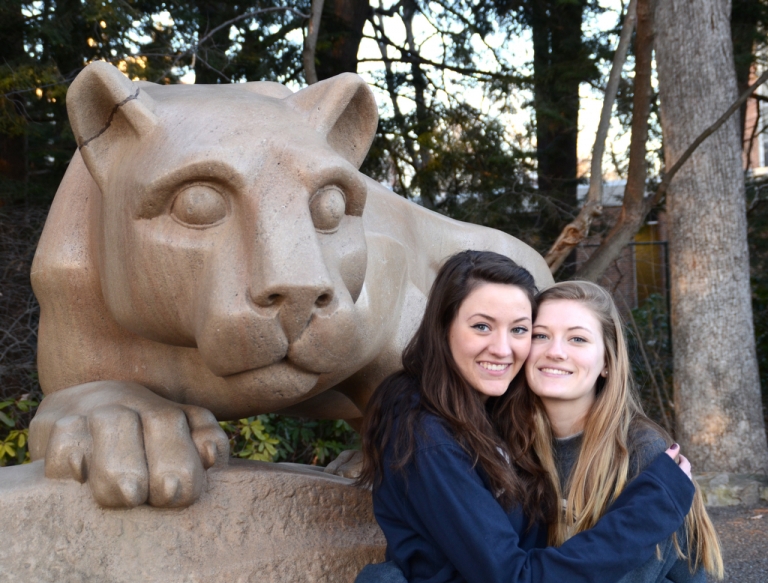 Kimmie Williams, left, a senior at Penn State and her sister Amy Williams, a sophomore, pose together by the Nittany Lion Shrine. The two sisters said they “enjoy hanging out together” but they have different interests and are involved in different activities at Penn State. / Photo by Katie Hynson 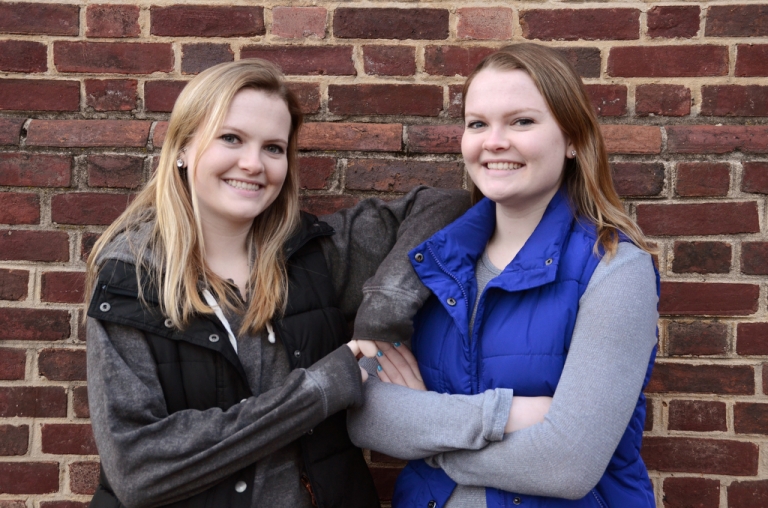 Jillian Vesey, left, and her twin Jordan Vesey, pose outside of West Commons. Jillian is majoring in communication sciences and disorders and Jordan is majoring in supply chain management. The two sophomores live together and have similar tastes, but different personalities. / Photo by Katie Hynson 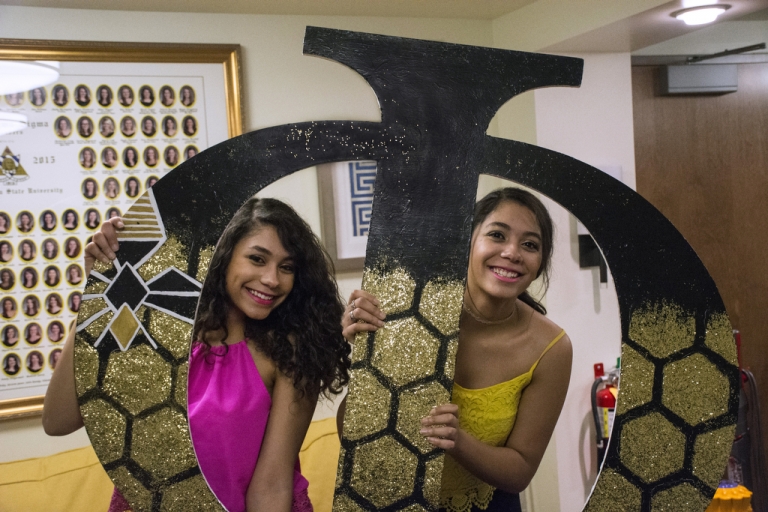 Jessie Taylor, left, and her identical twin, Jacqueline Taylor, are juniors at Penn State majoring in advertising and are in the same sorority, Phi Sigma Sigma. They said they love doing things together because they feel comfortable at all times. They rarely feel homesick because they know they always have each other. / Photo by Jacqueline Pinou 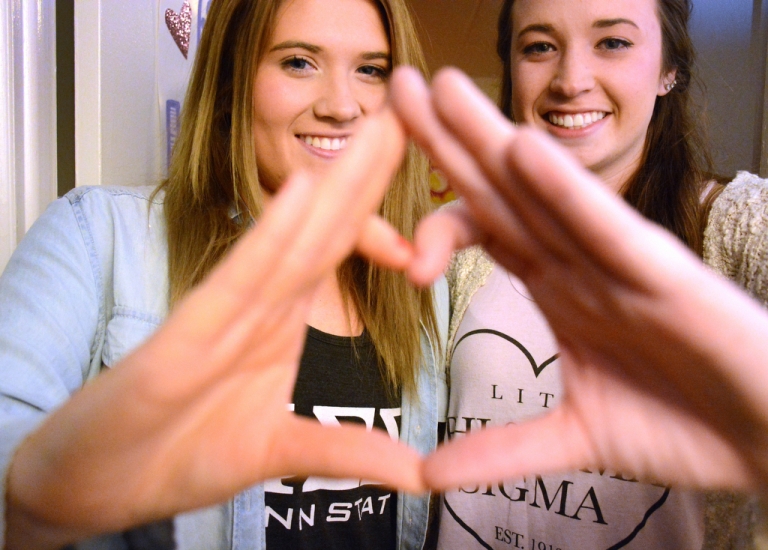 Kerry McCloskey, left, a sophomore majoring in economics and her fraternal twin, Megan McCloskey, majoring in rehabilitation and human services, are Penn State students who are in the same sorority, Phi Sigma Sigma. / Photo by Jessie Taylor 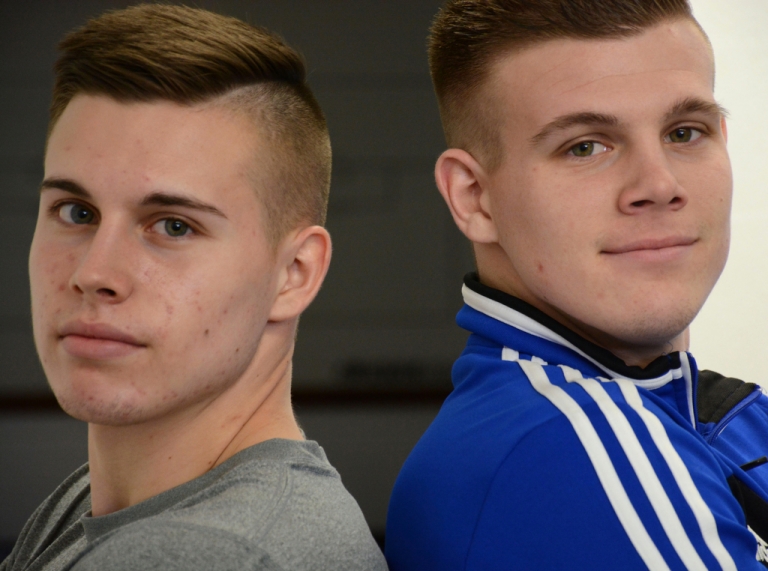 Penn State soccer players Austin Maloney, left, a freshman majoring in economics, poses with his brother ,Connor Maloney, a junior majoring in kinesiology. "There's not a better feeling than playing with the brother. Wouldn't want it any other way," Connor said. / Photo by Malik Cameron 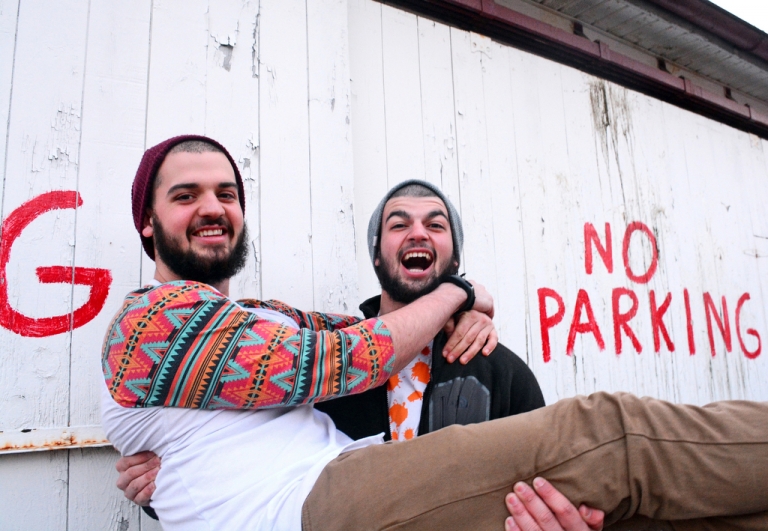 Jimmy Ungerman, left, is carried by his brother, Jonathan Ungerman, outside of Jimmy’s apartment in State College. Jonathan and Jimmy are both majoring in management information systems. Jonathan is a sophomore and Jimmy is a senior. The brothers said they often get mistaken as twins and are proud to call each other their best friends. Jonathan said he is sad to see his brother graduate this spring. / Photo by Kendall Senko. 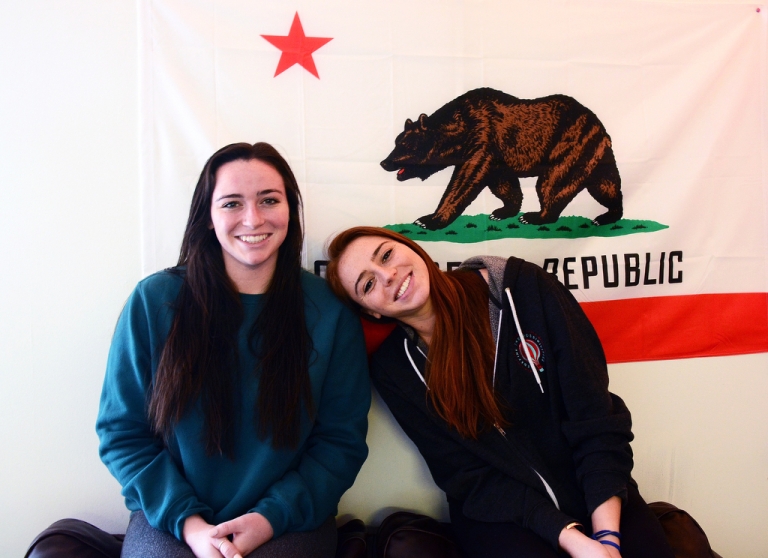 Julia Collins, left, poses with her sister and roommate Grace Collins in their apartment in State College. Grace is a senior majoring in supply chain management and Julia is a junior majoring in education. The sisters, who are from California, say they enjoy having each other on campus because their family is so far away. They said they make each other feel less homesick. / Photo by Kendall Senko 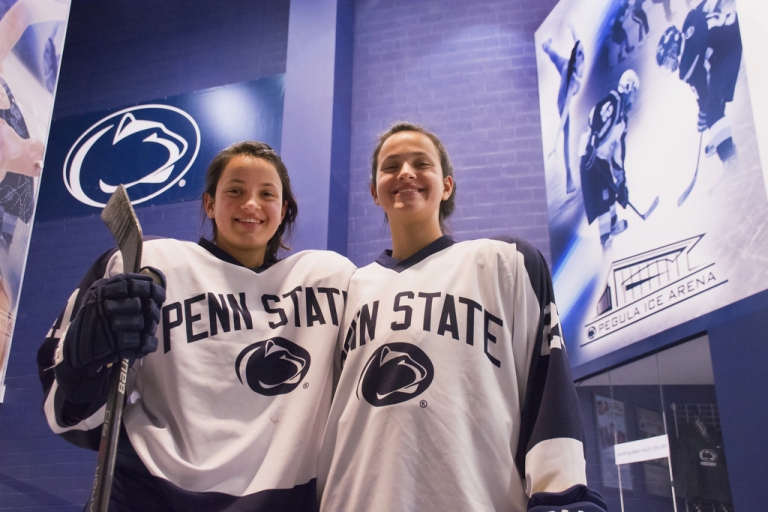 Tarika Embar, left, and her twin sister Emma, are sophomores at Penn State and they also play on Penn State's Women's Club Ice Hockey Team. Tarika, a kinesiology major and Emma, a psychology major, pose for a photo before their night practice at the Pegula Ice Arena. / Photo by Eajai Alvarez 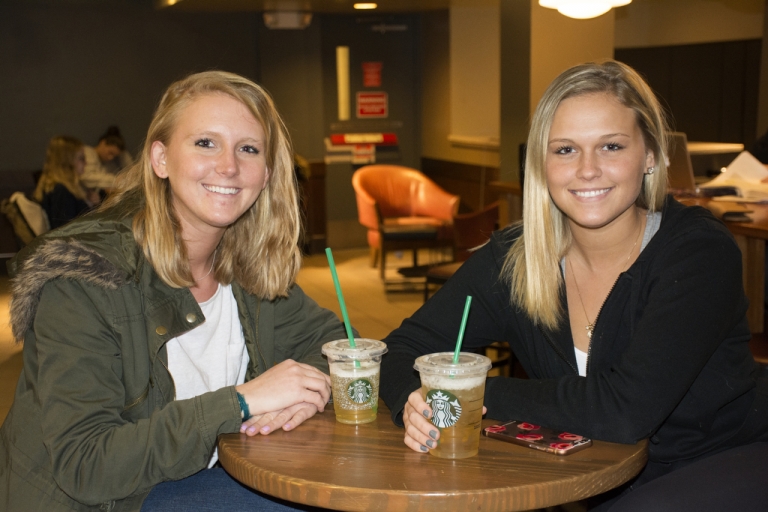 Steph Ross, left, and her sister Kellyann, pose at Starbucks in downtown State College. Steph is a senior majoring in advertising and Kellyann is a sophomore majoring in supply chain management. When they have free time they meet to catch up over a a drink at their favorite coffee shop. / Photo by Matt Manahan 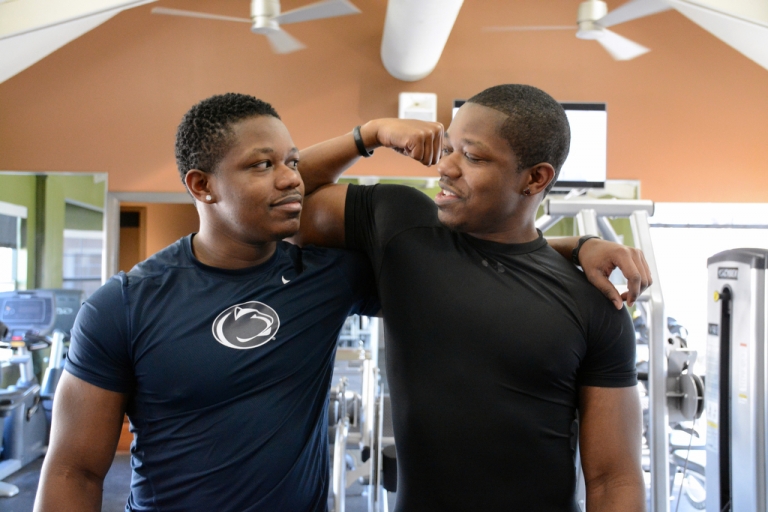 Toriq Howie-Bey, left, and his identical twin brother, Tariq Howie-Bey, seniors at Penn State from Pittsburgh, pose for a photo before a workout at Lions Crossing Gym in State College. Toriq is majoring in petroleum engineering and Tariq is majoring in kinesiology. “I think it’s cool that we both can go here and be with everybody. It’s just a good experience. It builds my confidence too just knowing that whatever he does I can do better.” Toriq said. / Photo by Tierra Rippy. 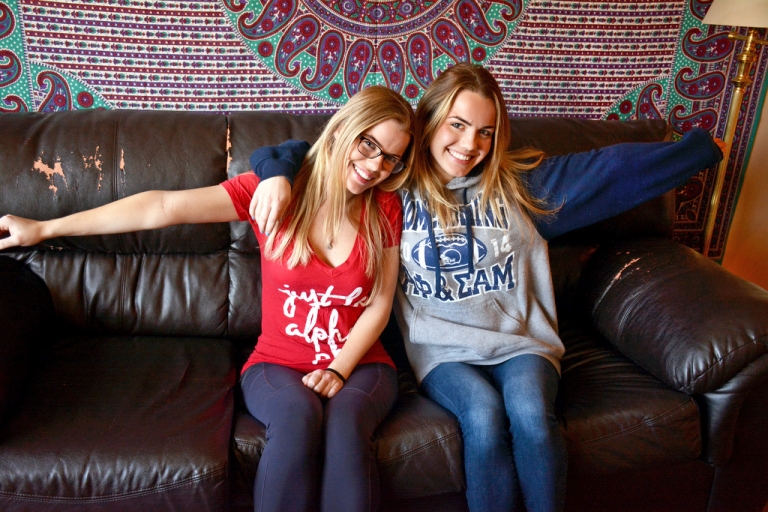 Regan Alecxih, left, and her twin sister, Karlie Alecxih, pose for a photo in their apartment in downtown State College. The women are not only fraternal twins, but also are sorority sisters of Alpha Phi. Regan is studying chemical engineering and Karlie is studying political science. / Photo by Jenna Vreeland 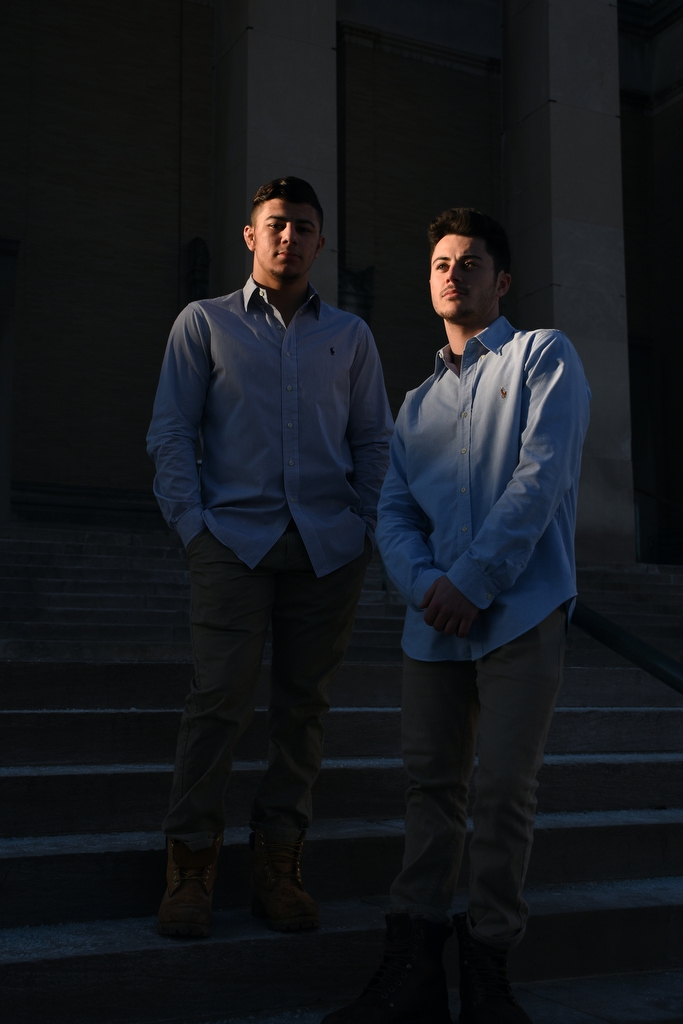 Vincenzo Joseph, left, a freshman on the wrestling team majoring in business administration, and his brother, Victor Joseph, a junior majoring in labor employment relations, pose on the steps of Paterno-Pattee Library. The siblings from Pittsburgh said they are grateful for having each other on campus because they feel home is never too far away. / Photo by Christy Xu

Hunters’ Dollars Promote Well-Being of Animals From Songbirds to Elk