The Story Behind 814 Shirt

Penn State senior Brandon McGowan wants to give his students a way to remember their time in State College that enabled them to create memories over the past four years. So he and his roommate launched a clothing brand called 814 Shirt to share the spirit of Happy Valley for years to come.

McGowan and his roommate Jesse Cox started this journey as an idea they had from the comfort of their apartment in 2020, and it soon blossomed into something they never thought would happen — a real business.

Respecting all CDC guidelines regarding the pandemic, they have worked and grown their business solely out of their apartment over the past year, but the two hope to expand it in future years by marketing at Penn State tailgates and bars around downtown.

“I think it is something we could do coming up post-graduation especially next year whenever football season happens I think that we could get the shirts out a lot by the end of the semester and the summer that we have a chance for a lot of people to see them next fall,” McGowan said.

The pandemic hasn’t stopped them from growing, though. They recently had the opportunity to sell their shirts at Doggies Pub, located on Pugh Street in Downtown State College. McGowan and Cox have also been able to grow a social media following on Instagram hoping to reach Penn State students and alumni and try share their brand with people who may be interested. 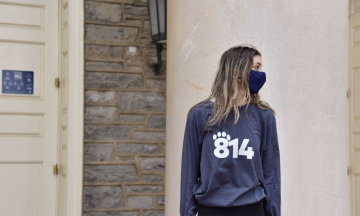 Right now, 814 Shirt focuses on eight logos which McGowan created with a friend Max Haberberger, four of which they bought from Haberberger and the other four were created by McGowan using Adobe Illustrator.

Penn State related branding is often copyrighted, so McGowan got around the copyright for his brand by using something Penn State and State College related without having to get into licensing concerns — 814 just being an area code that is recognizable.

He does say that he would be willing to work with Penn State logos and licensing in the future if they gain enough traction.

Just a few weeks ago, it was released that the State College area added a new area code, 582. It isn’t something that McGowan is concerned about, though. This is something McGowan hopes to incorporate into their brand in the future — making it accessible to incoming students while still keeping the iconic 814 in their brand as well.

Their website has been a work in progress, but offers all eight logos in different colors and even caters to Penn State specific holidays such as State Patty’s, an event held in late February or early March each year.

Although their business is quite new, this is something that McGowan and Cox hope to continue for years to come post-graduation. McGowan shared that it is a way to keep the Penn State memories alive and pass it down to future generations for years to come.

814 Shirts keep the Penn State memories alive by getting to share the historic area code with people around the world. Take a closer look at what they look like here.

After graduation, I hope to work for a large news company writing and producing stories. During my time at Penn State, I have created content for both print and broadcast clubs such as VALLEY Magazine and PSNtv. My sophomore year, I was fortunate enough to get a communications internship at Penske Truck Leasing where I got to help plan PR campaigns and aid in creating graphics. In the fall, I will be attending NUI-Galway to get my MA in Global Media and Communication.

Relay For Life: A Look at the Many Different Organizations