It takes a selfless person to dedicate their life to a cause bigger than them self, and that’s exactly what Fernando Muñoz has done.

Muñoz, a native of Los Angeles, California, spent the entirety of last summer involved with social activism and attended over 20 rallies in support of minority rights and to protest against police brutality and racial discrimination. He felt especially motivated to protest and use his voice for change following the death of George Floyd. 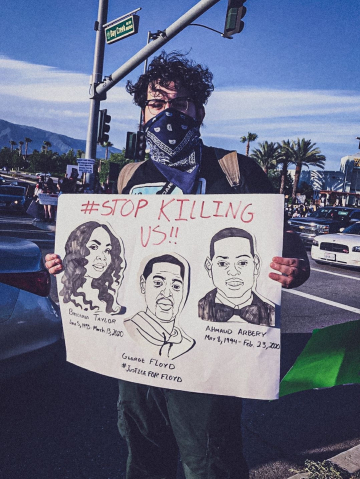 “(Floyd’s death) was the straw that broke the camel’s back, because our community, and I think it was more of a representation of everyone in the country, felt enough was enough,” Muñoz said. “We rallied within our own issues.”

“That really motivated us to go out every single day for that entire summer to just rally and call out the injustice.”

Muñoz grew up surrounded by social activism throughout his childhood, and learned the importance of selflessly giving back to his community. When he was young, his mother would take him to her clinics, where she would help people for free. This exposed him to social work, and developed his passion of helping others.

“That kind of gave me the avenue to expand on those social issues because everyone is suffering, and there’s so many ways to deal with it.”

As a Latino person who is a senior at Penn State, a predominantly white university, Muñoz felt inspired to use his background in social activism to create his own multi-cultural social entrepreneurship organization, Papi Chulo, on campus. The club's main goal is to develop cultural awareness and social relationships for Latinx people.

Papi Chulo provides Latin and minority Penn State students a safe and welcoming home to freely express themselves, meet other students with similar backgrounds, and get involved in the local State College community. Their venture includes townhall functions to educate students on social activism and political trends in our country, hosting social events for its members, and providing rides and grocery pick-ups to people as a cheaper alternative to Uber or Lyft.

Muñoz felt that creating this organization was crucial in giving students of color a place to call home.

“The school is doing somewhat of a good effort in class (educating students on minority issues), but outside of class, for someone who’s brown like me, I don’t have those opportunities to enjoy myself, so I had to make that happen for my community.”

Muñoz stressed the need for people to take the passion they feel from the protests and use that to enact change in their communities. He stayed true to his word, and did exactly that by founding and successfully growing his Papi Chulo organization.

“It shouldn’t just be the protesting and the rioting and fighting the cops. You should use that as motivation to do things within your community, like I did with Papi Chulo."

Despite enacting real change and having helped many people throughout his life, Muñoz won’t be satisfied until there’s real equality for everyone.

“I don’t feel prideful, I feel it’s just more annoying, because why do I have to be in this position do it, because there’s problems. Ideally, I would not like to do this. I would just like to go on with my day and be happy if there’s no problems, but that’s not the case. So I’ll be prideful once the problems been solved. Until then, I’ll just be on my grind making sure it goes away.”

As someone who spent weeks protesting the death of George Floyd, Fernando Muñoz said the verdict provides justice for his family, but not for people nationwide who have been victims of police brutality.

As someone with a background in both writing, camera work, and live production, I’m looking to go into the music and hip-hop industries as a journalist or videographer. I truly have a passion for both music and creating content, and I’m looking to mix the two into a career.

The Story Behind 814 Shirt