Brooke Fisher and Matt Porter are attending their second prom, but this time, there’s an element to the night neither one had before.

The couple—both born with Down syndrome—are just about to celebrate their one-year anniversary. They kicked it off by walking arm-in-arm on a red carpet into A Night to Shine at Calvary Church in Boalsburg, Pa. on Friday, Feb. 9, 2018.

“Night to Shine,” sponsored by the Tim Tebow Foundation, is an annual prom held for individuals ages 14 and over with special needs. This past event was hosted in more than 500 locations in all 50 states and 11 countries.

Attendees were able to have their hair and makeup done and have their shoes shined free of cost. Corsages and boutonnieres were offered in pink, red and white to each guest.

Before the prom, both Brooke and Matt got ready anxiously in their homes with family members. Brooke’s hair and makeup were styled by her mom, Margie Fisher. Mother and daughter danced to some of their favorite songs, including “Slipping Through My Fingers” from the ABBA-inspired musical, “Mamma Mia.” Listening to the song as she curled her daughter’s long hair, Margie started crying. She says she never thought Brooke would have the same opportunities as her or her other children, which included prom.

She recalls being with newborn Brooke and thinking, “I just remember holding her, crying, wiping her little wet head, thinking what kind of life would she have to enjoy?” Margie says.

Margie also says this prom is “what proms are all about” because Brooke was going with the person she really loved.

Brooke is known for singing the national anthem at sporting events around Centre County and scoring a touchdown at this year’s Blue & White football game. She described her dress as black with “bling bling” on the top. She says she wanted the dress to be beautiful for her and Matt.

She says she can’t wait for the prom because it’s so “special” for her heart. Brooke had “happy tears” while she described how excited she was to go to A Night to Shine with Matt.

“Happy tears mean I feel my heart,” Brooke says. “He makes me happy all the time.”

“My heart is special for him,” she says.

Meanwhile at the Calvary Church, Matt waits for Brooke with a red corsage matching his red vest and tie. Brooke and Margie missed the turn towards the church, causing them to be late.

When they finally arrived, Matt greeted Brooke at the door as her white van opened and said she looked “beautiful.” Matt tied the corsage around her wrist, and they entered the church.

Brooke and Matt never left each other’s side throughout the night, even doing an interview together for the local news station.

Every guest at A Night to Shine is crowned a prom king or queen. Everyone on the dance floor placed crowns on their head at the same time and the room erupted with cheers.

Matt says his favorite part from the whole night was “be her date,” but also enjoyed the free limo ride the prom offered.

During the limo ride, Brooke and Matt shared a kiss while those riding with them shouted “sugar.” Their kiss was met with a big applause.

Both families see an ordinary future for the couple. Matt says he hopes to marry Brooke someday.

"Matt can definitely take care of a house and a wife,” said Joyce Porter, Matt’s mother.

The couple said the next step is that they plan on moving in together.

It's video portrait time in the photo booth for participants at A Night to Shine.

Scenes from a prom. 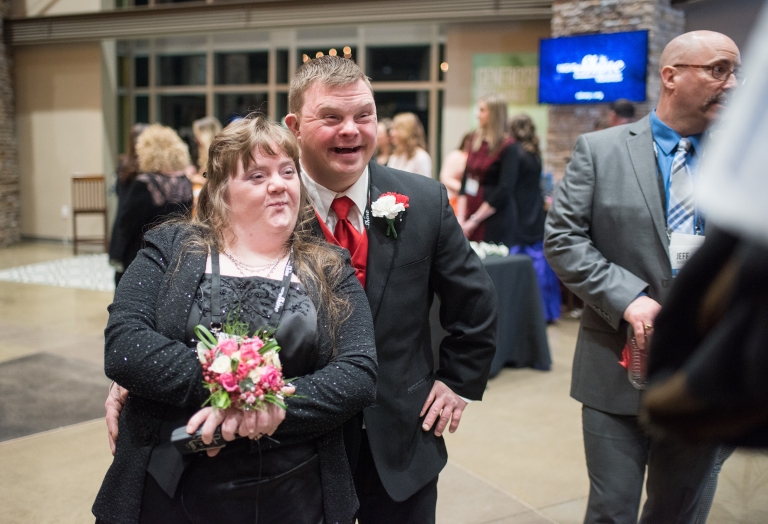 Brooke Fisher and Matt Porter pose for an official portrait during A Night to Shine at Calvary Church in Boalsburg, Centre County. / Photo by AnQi Wang 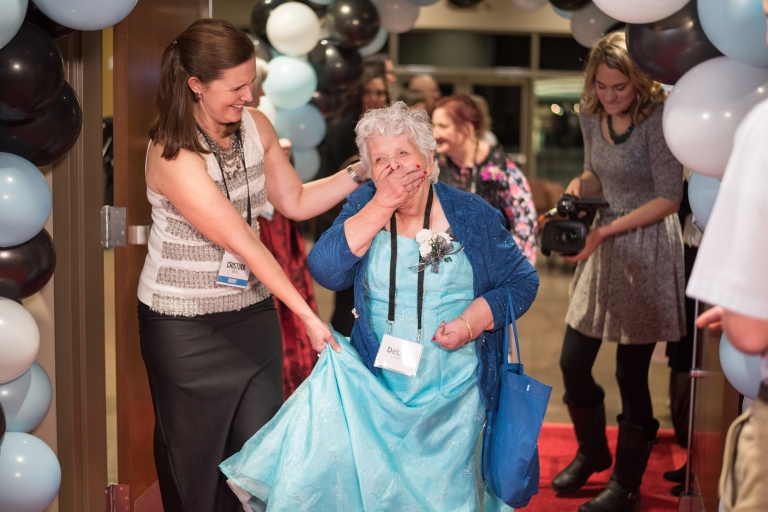 Deb Brown walks onto the dance floor at A Night To Shine. / Photo by AnQi Wang 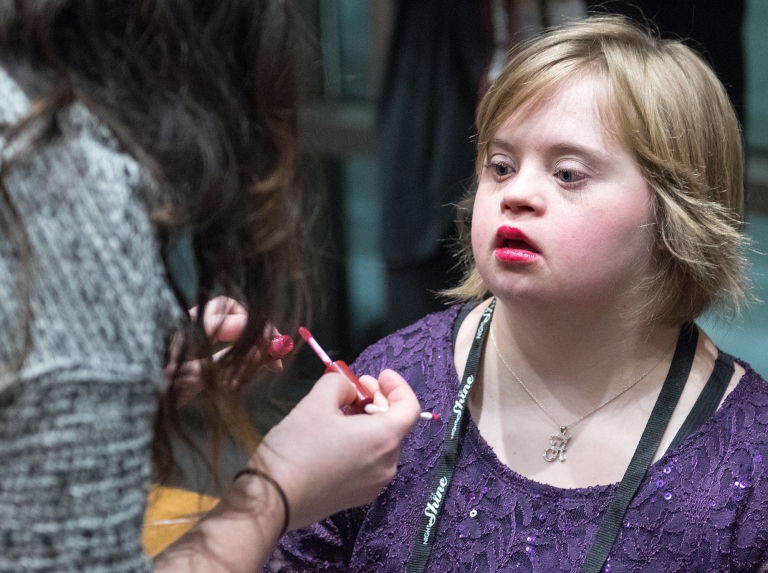 A volunteer applies lip gloss to Abbagail Harvey during A Night to Shine. / Photo by Maddie Almer 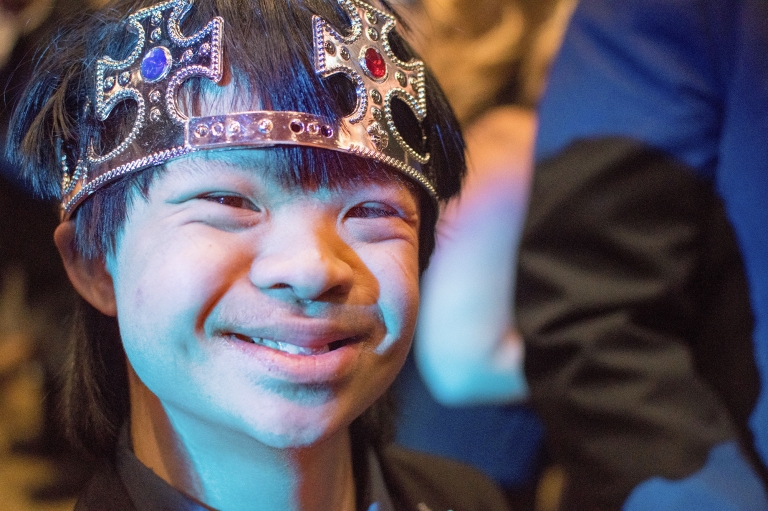 Kenan Worth smiles after putting his prom crown at a Night to Shine. / Photo by Maddie Almer 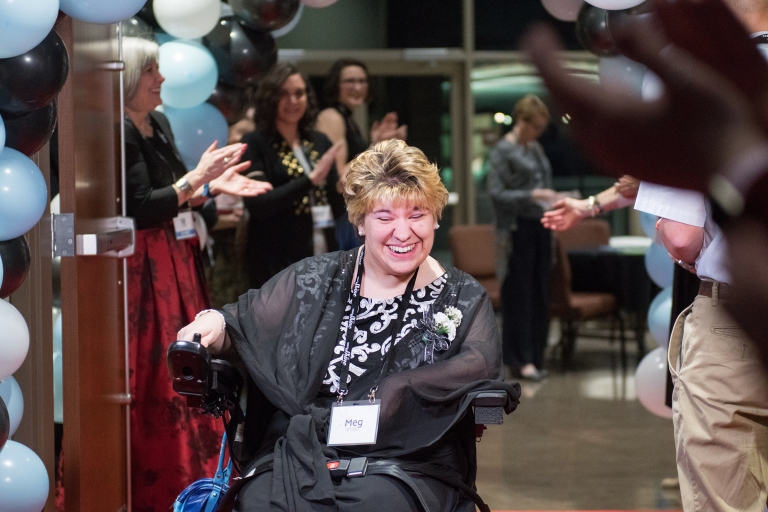 Meg Ritchie makes her grand entrance to the prom at A Night to Shine. / Photo by Georgianna DeCarmine 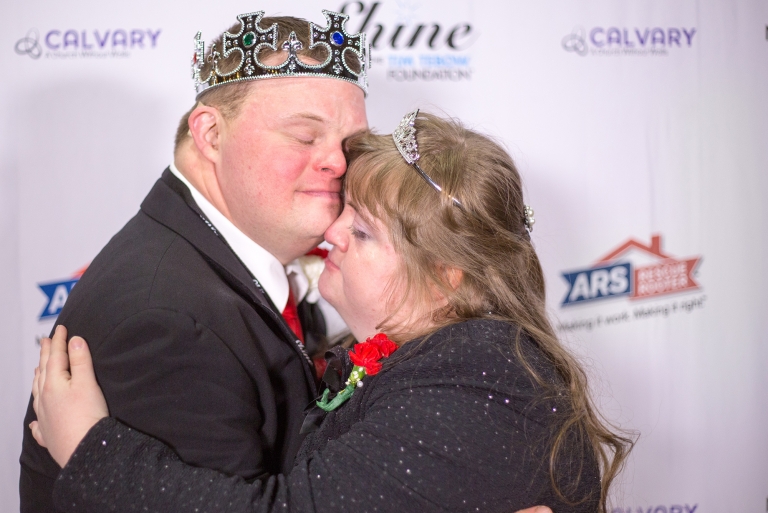 Brooke Fisher and Matt Porter wind down their prom experience at A Night to Shine at Calvary Church in Boalsburg, Centre County. / Photo by Georgianna DeCarmine

Emeling Navas is an aspiring multimedia journalist from Miami, Florida. She has interned and written lifestyle articles in Buenos Aires, Argentina for The Bubble, a media startup that caters to expats. She currently writes for The Daily Collegian as the food and health reporter and has written for the politics beat as well. This past summer she interned for WPSU as a marketing intern interviewing Vietnam veterans for The Time to Heal Project. In the past she has participated in the Short Doc Workshop creating a short video on a Penn State hijabi student from Turkey.

Baidi Wang, is from Shanghai, China. She aspires to be a visual journalist or a filmmaker. She enjoys producing stories that convey emotion in a compelling way.​ She is interning as a production assistant for documentary filmmaker Boaz Dvir. She is a photographer and videographer for The Underground at Penn State. She has produced video stories for the NPPA Multimedia Immersion workshop at Syracuse University and for the Keystone and Short Doc workshops at Penn State.

I am a senior photojournalism student at The Pennsylvania State University.I have a special place in my heart for adventure, travel, and film photography. In the future, I hope to pursue a career in the photography realm.