Second half offensive slugfest comes down to a kick 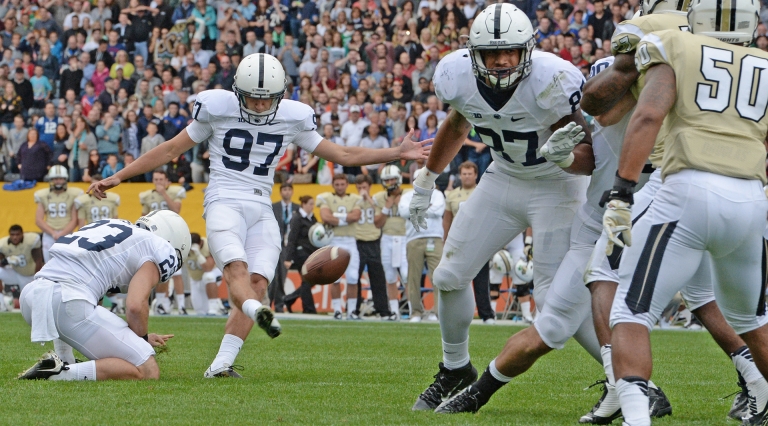 DUBLIN – Christian Hackenberg had already set a Penn State passing record by the time he stepped onto Croke Park’s turf trailing by a point with 1:08 to play. 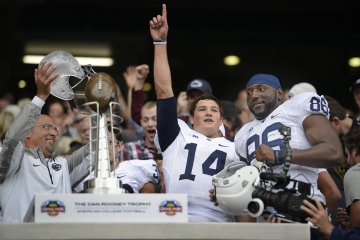 Then he led the Nittany Lions to a 26-24 victory over Central Florida in the Croke Park Classic.

He picked up seven yards on a short out to Geno Lewis that stopped the clock on second down. After a long incompletion, Hackenberg stared down UCF’s defense and left the pocket, willing his way to seven yards and a first down to extend the drive.

For all the unknowns of this Penn State team, it knows it has Hackenberg, who surpassed the program’s single-game passing record held by Zack Mills (399 yards in 2002). 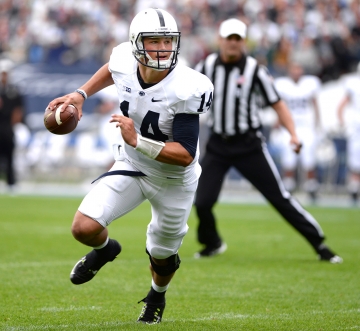 Hackenberg threw for 454 yards on a 32-of-47 day. He twice had to stretch out his knees behind a play, but nothing was going to stop him. Especially not a crunching hit on that first down run.

Three more completions, one a rushed flip to back Bill Belton, and two to receiver Geno Lewis, were all he needed to set up kicker Sam Ficken for a 36-yard field goal as time expired.

Just like that, James Franklin had a victory in his debut as the Nittany Lions’ head coach.

“I think a couple things,” Franklin said. “We didn't play the prettiest game today. We did the things that you typically can't do, we had too many penalties, and we had turnovers. 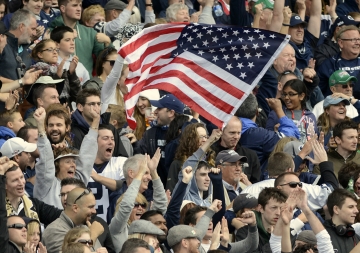 The game in Dublin’s historic Croke Park stadium was set up while Bill O’Brien was still the head coach, and pitched as one coach of Irish heritage opposite another in UCF coach George O’Leary. But O’Brien left for a job with the Houston Texans in January, and Franklin was hired weeks later.

It was one of the many changes Penn State went through in the offseason. And the Nittany Lions came into the game with a long list of unknowns.

Would their thin offensive line, which returned just one starter from 2013, hold up?

Would a flight across the Atlantic Ocean throw off their routine? 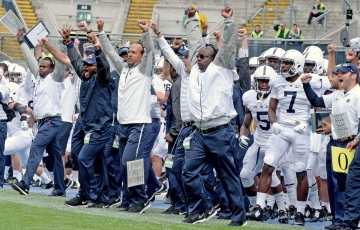 Would Franklin, and his new staff, be able to mesh with a group of players that have had anywhere from one to four head coaches in their college careers?

The answers came in spurts.

There was the first half, when Hackenberg had plenty of time to throw and the defense looked dominant.

Then there was the final drive, when Hackenberg never seemed to stray from offensive coordinator John Donovan’s calls.

“We were excited,” Hackenberg said. “This team’s been down before. Even though we were young, we understood what we could do.” 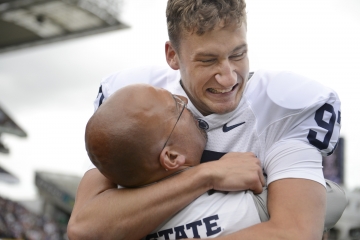 Finally, there was the kick by Ficken, still dogged by a series of misses against Virginia in 2012. He was a hero Saturday, though, and afterward Franklin was among the first to embrace and lift him up.

For Central Florida, its day began when a skydiver carrying a program flag and game ball missed the stadium completely. For a while, it seemed like an omen.

It wasn’t until Justin Holman replaced the ineffective Pete DiNovo at quarterback in the second half that the Knights got on track.

The sophomore put together back-to-back 70-plus yard drives to pull the Knights’ to within three. He then led an eight play, 75-yard drive capped by a 6-yard scamper to give UCF its first lead of the game with just over a minute to play, silencing a Penn State partisan crowd. 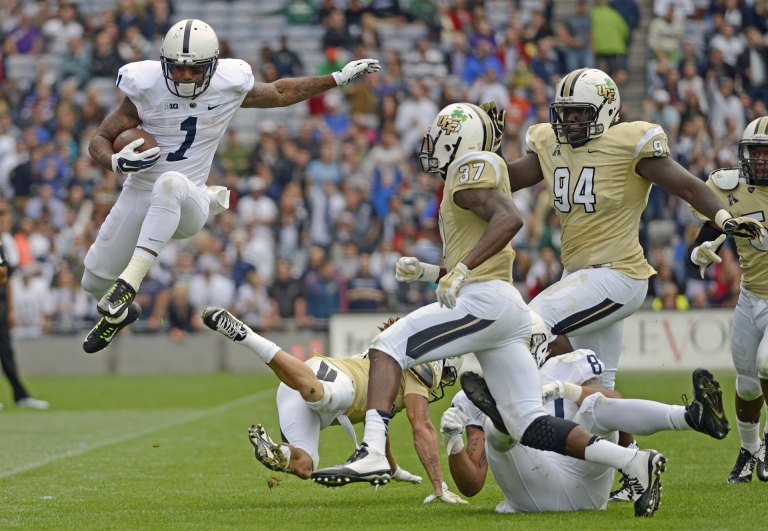 It wasn’t enough. Hackenberg, who earlier heaved a 79-yard TD pass to Lewis, and his Penn State teammates wouldn’t allow it.

“I think everybody in the country would like to have [Hackenberg],” O’Leary said.

And so the first international game for both programs ended with the Dan Rooney Trophy in Franklin’s hands first, and then Hackenberg’s. Penn State coaches and players, the same ones who were strangers seven months ago, were hugging and high fiving.

An announced crowd of 53,304 was on hand – including Rooney, the former U.S. Ambassador to Ireland – for the first college football game here since 2012. Fireworks shot off from roof top canisters and confetti dotted the field as Penn State left victorious. 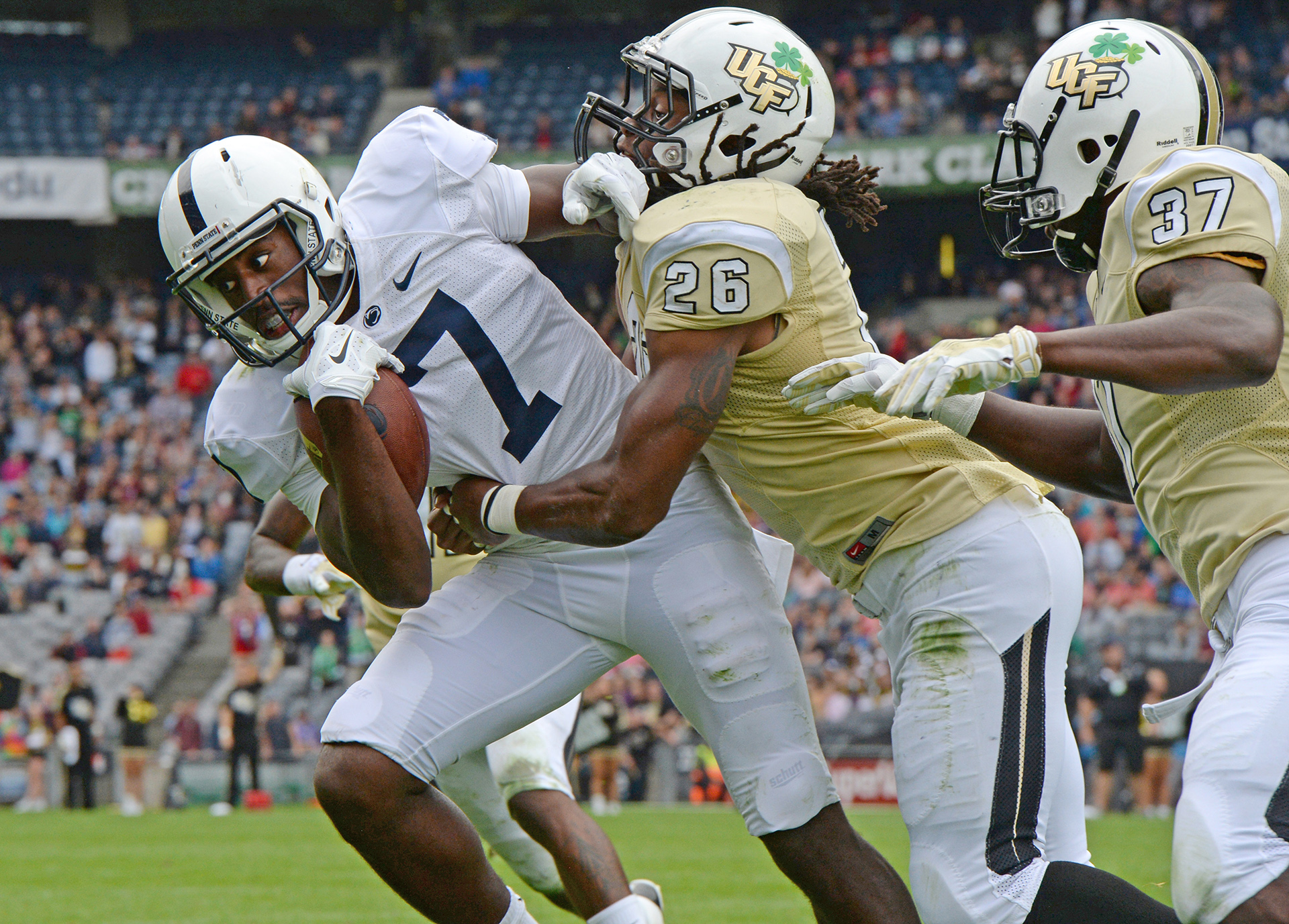 There’s a lot – lots – left to learn about this Nittany Lion team. If anything was discovered on a cool day in Dublin, though, it’s that Penn State’s newest parts are meshing with its familiar ones, even if they started by going five time zones from home.

“We're really going to enjoy the win,” Franklin said, “but by the time we land, it's going to be morning time, the coaches will go right into the office, the players hopefully will get some sleep, and then we'll be practicing that evening.”

Penn State agreed to the Ireland game partly because of the four-year postseason ban imposed by the NCAA after the Jerry Sandusky case. The Nittany Lions still have two seasons to go before they can play in a bowl.

But at least they won a classic.