HAVANA, Cuba — The players stood in opposite dugouts, ready to parade out with national flags in hand. Fans honked horns and dance music blared on the PA system.

On a day when a Cuban baseball official said he looked forward to a time when his country’s players not only filled MLB rosters, but could also “walk through the airport as you do,” everything seemed set for a celebration. 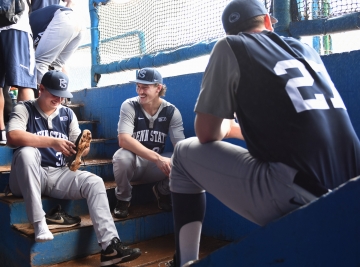 Penn State infielder Tyler Kendall, left, scrapes mud from his shoes as he and teammates Nick Hedge, center, and Jack Anderson wait in the dugout during a downpour at the Latin American Stadium in Havana, Cuba, on Sunday. The team's game against Cuba's Industriales was rescheduled to Monday due to rain. Photo by Cameron Hart

Then a very Pennsylvania thing happened. The skies opened up.

“It’s a pretty easy thing to get up for, it shouldn’t be a problem for our guys,” Nittany Lions coach Rob Cooper said. “If you aren’t excited to get up and play a team like the Industriales, you shouldn’t even be playing in college.”

A downpour hit about three minutes before the scheduled start. Fans quickly fled their seats to take cover under the venerable stadium’s partial roof. Groundskeepers placed tarps over the pitcher’s mound and home plate as puddles formed on the rest of the infield.

Earlier on Sunday, the team listened to a lecture from Rodolfo Puente, vice president of the Cuban Federation of Baseball and former national team shortstop, about the history of the sport in Cuba.

Puente talked of a world where he hopes his players will “have the same rights as other people.” For him, lifting the long-standing U.S. trade embargo of his nation seems like the perfect fix to the steady trickle of Cubans defecting from their home country.

Against the backdrop of the two nations normalizing their diplomatic relationship, there have been signs that MLB may return to Cuba for the first time since 1999, when the Baltimore Orioles played an exhibition game in Havana.

Puente sounded upbeat about the future between Cuban baseball and MLB, even praising those who chose defection over a career in his league.

"I’m very happy because this talent was formed in Cuba," he said.

Signs of the baseball friendly future were displayed throughout the ballpark. An American flag hung over the visiting dugout, the letters "USA" – in place of  "Penn State" – lighted up across the scoreboard and fans strolled into the stadium in a random collection of MLB apparel.

Penn State players also got a taste of baseball, Cuban style, including fans with noisemakers making a ruckus fully half an hour before first pitch was scheduled.

Cooper doesn’t plan to take full infield batting practice Monday, but instead just stretch out his team and allow them to enjoy playing in Havana.

“They were excited to play today, it was a festive atmosphere,” Cooper said. “I want them to experience everything around them culturally because they won’t have that when we get back home.”

(Maddie Brightman and Courtney Barrow are students in the John Curley Center for Sports Journalism at Penn State.)