Ethan Cook is a junior majoring in broadcast journalism at Penn State University. During the spring semester of the 2019-2020 school year, the coronavirus spread from China to the United States creating a pandemic that caused causing most states to shut down and go into a period of social distancing.

Cook says that life at home has not been too bad for him. His family is healthy, and they are doing some work as well to keep themselves occupied in this unprecedented time. His father, William Cook, has been working on the upstairs bathroom throughout the stay-at-home period and his mother, Bridget Cook, has been doing her schoolwork as a teacher from her office at home. However, there is something that has been bothering Cook during the quarantine period.

Cook is forced to remain home, and he has not been able to see his girlfriend because of the shutdown. He met his girlfriend at Penn State, and they have spent a lot of their semesters together. This semester, they ran into a little bit of a challenge. 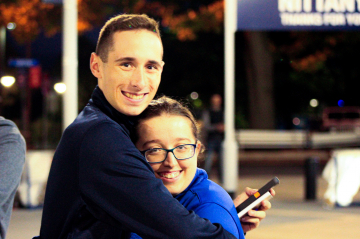 Ethan Cook and Teresa Salamone have been together for over two years and have often spent a lot of time at Nittanyville during the football seasons throughout their time at Penn State.

Cook is from Stroudsburg, Pa. and his girlfriend, Teresa Salamone, is from Norwalk, Conn. This is about a two-hour distance from each other. being so close has not made being separated an easier.

Both did not expect that they would remain home for the remainder of the semester. Especially considering that they left a lot of their stuff in their dorm rooms.

They both also had to adjust to not seeing each other every day for the remainder of the semester. They have done this over the summers so they thought it would be no issue. But then Cook realized that the quarantine would affect some especially important dates for them.

One big example of this would be that they could not celebrate their two-year-anniversary on March 18th. Cook and Salamone had to adjust to using video chat instead of face to face interaction.

Both Cook and Salamone said that the change has been exceedingly difficult and that they miss being at school and with each other very much. However, they are adjusting to the necessary changes so that they can keep their families safe in this time.

Salamone had stated that she misses seeing Cook everyday and she hates this situation. Cook said it is extremely tough for him not to be with his girlfriend.

Salamone also touched on the fact that she misses the atmosphere of Penn State and she also misses seeing her friends every day. She said that she hates being at home during the quarantine.

The experience has not been the ideal situation for either of them however, they are making the most out of the situation and they said that they are looking at the positive side of things. Cook even stated that he is glad that everybody is healthy and that he believes that life will return to normal soon enough.

Cook and Salamone agreed to postpone their usual activities that they usually have set for this time of year until they return back to school and they can have that face to face interaction that they have been looking for. They have already planned to have a late two-year-anniversary celebration together once they return to State College in the fall.

Life during Covid-19 on social media

For a class project, Cook posted pictures of life in Stroudsburg under social distancing. This image was republished by the international @Covid19globalview Instagram project.

Noah Cook plays an online video game with a neighbor in Stroudsburg, Pennsylvania, USA. Ordinariky the two are inseparable. This is as close as they’ll be able to get for at least the next few weeks.

Some friends are just inseparable during the coronavirus. They can communicate digitally and they even can play videogames with each other because they have internet. That is exactly what Noah is doing with his friend who is also in Stroudsburg. #covid19GlobalView #COMM481virus pic.twitter.com/poYXm3qtuo

In Stroudsburg, PA, Bridget Cook is taking a Turkey out of the oven in the kitchen to prepare it for dinner during the quarantine period. #Comm481virus #covid19globalview pic.twitter.com/rayElxQbTN

Noah Cook, of Stroudsburg, is not limited to one video game system during the corona virus pandemic. He is continuing to play video games with his friend from the same town while following the Pennsylvania “stay home” order. #comm481virus #Covid19GlobalView pic.twitter.com/xQFhzSn2Xs

Noah Cook is in the process of catching a fish while enjoying nature in Stroudsburg, PA during the corona virus pandemic. #Comm481virus #Covid19GlobalView pic.twitter.com/GBA9qzBa0e

The corona virus pandemic allows not only humans to take the time to stay at home but it allows pets to relax as well. Necie is relaxing as she is watching her owners watch TV. #Comm481virus #Covid19GlobalView pic.twitter.com/9wG6xJFa6A

William H. Cook is taking advantage of the time that he is spending at home to do some work around the house. Cook is working on the bathroom floor for the upstairs bathroom. #Comm481virus #Covid19GlobalView pic.twitter.com/vPoRfetsyM

Ethan is a play-by-play announcer for CommRadio who is aspiring to be a college football analyst for either a major sports network or a college radio station.