Nate Moran loves to entertain. He competes each year in  the National Veterans Creative Art Festival. In 2011 he wanted to find a new way to breathe life into the Usher song 'There Goes My Baby.’  He put on mime makeup and soaked in the applause.

Nate the Mime was brought to life. 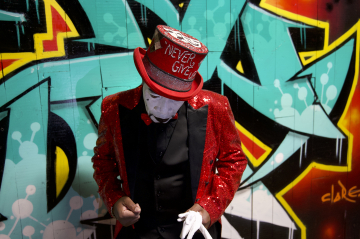 Nate Moran performs as Nate the Mime at the Alternative Gallery on April 21, 2021 in Allentown, Pa. Photo by Neilyce Tejeda

As a veteran, Moran is able to compete every year nationally in the National Veteran Creative Art Festival where veterans from all over come to compete in the arts. He first entered the festival competition in 2009 and won. He’s competed ever since and has won every year. However, when 2011 hit so did inspiration and he took the chance on performing the song by Usher with the mime makeup on. An unknown passion was tapped into. He’s explored jazz, tap dancing and even a little bit of African but “this mime took over” Moran said.

The road to Nate the Mine’s success wasn’t easy as Moran faced occasional hate for the misunderstanding of his art. He recalled a specific day at a fashion show in New York City, he was doing a photoshoot and the next day a man came to him, with a negative comment. Moran recalls the man said, “oh it’s okay for a black guy to wear white face but we can’t put a black face on.” He ignored his comment. Moran says he knows what his art is about and there’s been a few Facebook comments about it as well, but he looks the other way.

“When somebody comes negative, I just think okay you still have to grow up,” Moran said. “If you don’t see this as art, and theatre, then you have some growing up to do.”

Moran has not only faced the heat of being in the spotlight but also homelessness twice. The first time it was after serving the country and going through a divorce with a clouded mind. Being homeless once didn’t prepare him the second, the second time hit harder.


“I went through situations and I ended up homeless again, but this one was rougher than the first time and I was there for two years,” Moran Said. “And it was rough. A lot of bad days, I slept in the snow, on the park benches and I‘ve gotten hit when I was sleeping”

Moran has published his story and journey in a recent published book. His book, The Mime Speaks is his first accomplishment but he says it's only the beginning.

This year in October hits a decade of Nate the Mime. He’s performed for weddings, fashion shows, funerals, music videos and events for autism. Moran has built a website and an Instagram platform in pursuit to reach others in spreading his story. He’s currently working on a feature role in the Dagon Squad Film series, soon to be on Netflix and social media.

With Moran’s first published book on Amazon , The Mime Speaks, hitting best seller in the dance category the first week it dropped, he intends to keep spreading his story in hopes to inspire others to never give up. To keep dancing in the rain.

Neilyce enjoys multimedia storytelling. She wants to learn how to be a better video cross platform storyteller and has interned at Penn State College of Arts & Architecture as a multimedia communications intern.