PHILADELPHIA – Hundreds of delegates have arrived here from all parts of the United States for the Democratic National Convention, but there are lots of international people here, too – and they have some strong ideas about the presidential race.

In a series of interviews near the Liberty Bell and Independence Hall on Sunday and Monday, foreign visitors and recent U.S. transplants from China, France, Peru and Taiwan said they have often been surprised by the campaign’s tenor.
They also have some strong opinions about the two candidates, Republican Donald Trump and presumptive Democratic nominee Hillary Clinton. 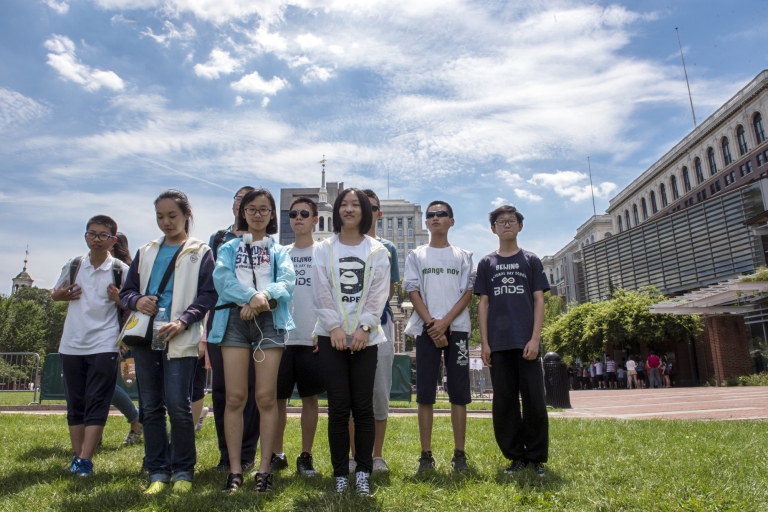 Middle school students from Beijing, China, pose for a group photo in front of Independence Hall in Philadelphia on July 24, 2016 before the start of the Democratic National Convention. They students came to see the historical site in Philadelphia, and have traveled to New York City and Washington, D.C., as well. (Photo by Gabrielle Mannino)

“I think Trump doesn’t really care much about the international business. I believe that Hillary is more international,” said Anthony Tang, from Taipei, Taiwan, who is now working in the U.S. “She did a very good job as secretary of state.”
Weng Lin, a graduate student from Beijing, was accompanying a class of middle school students from her country. On Sunday afternoon, as they were posing for photos near the Liberty Bell, they found themselves amid a protest for clean energy
While her young students may not be following the U.S. election, she said that she and her friends read about the race, and they view Trump as “a very unusual person.”
“You never know what he will do or say,” she said. “Chinese people are quite interested in him.”
While some foreign visitors may be both interested in and wary of Trump, others said they would not mind if U.S. voters chose another candidate – Democrat Bernie Sanders.
Lili Mekarni and Laure-Anne Favre are visiting Philadelphia this week from Paris, specifically to observe the convention.
Without elaborating, Mekarni said this is the not right time for Clinton to take office, but she said she is strongly opposed to the idea of Trump as president.
“We definitely don’t want to see Trump as a president,” Mekarni said. “It’s not a good solution to have a new social paradigm, and all of us, we know that we need a solution to live all together.”
Although many international visitors said they were still hoping Bernie Sanders would have a chance to win the Democratic nomination, many said that if it came down to Trump and Clinton, they’d vote for Clinton.
“We would like to see Bernie,” Favre said. “As a European, we think Bernie is more progressive, and his ideas are more universal. He’s a humanist, he’s a good leader; he has good ideas… We think he’s a good solution for your country [America] and for the world.”
James J. Cuorato, president and chief executive officer of Independence Visitor Center Corporation, said international guests account for a healthy number of visitors at famous Philadelphia landmarks, such as the Liberty Bell and Independence Hall.
In 2015, he said, about 4.3 million tourists visited the Independence National Historic Park. Some 2.2 million individuals visited the Liberty Bell and 727,000 visited Independence Hall.
Cuorato said the most popular countries of origin after the U.S. are the United Kingdom, Canada and Germany.

Mekarni and Favre talked about choosing the lesser of two evils – an idea that more than one international visitor mentioned.
Ana Maria Quispe Piscoya now lives in New Jersey but is originally from Peru. She is the director of global justice for animals and the environment of Latin America. Like Mekarni and Favre, she said elections are sometimes about not having ideal candidates.
“I saw some papers discussing ‘the two evils.’ It’s happening here and unfortunately it seems like it’s happening everywhere in the world. We just had elections in Peru,” she said, “and the two finals were like choosing two evils, so we have to choose one of them.
“But, I always have hope that we as individuals can do something,” she continued. “We can help each other, we can create new jobs. There are many ways that we can stop this nonsense.”